By a Blue Virginia contributor

John Whitbeck Wants to Get Whomped by Wexton Once Again
We can thank the NRCC for their bald-faced incompetence; they blew millions on Barbara Comstock’s race when the folks in the VA GOP knew she was toast. But it hasn’t taken long for a familiar name to take a hard look on taking VA-10 back in 2020- enter John Whitbeck!

The one-time chairman of the Republican Party of Virginia is probably best known for telling a definitely-not-anti-Semitic joke. Whitbeck also is known for having grabbed the last parachute and jumped out of the crashing VA GOP airplane once neo-Confederate Corey Stewart won the Senate nomination last summer.

Looks like Whitbeck’s kept himself busy since then: word on the street is he thinks he just might be able to take Jennifer Wexton on in 2020. My hat’s off to John for optimism, I guess. If I were him, though, I’d still be having nightmares about what happened the last time he went up against Jennifer Wexton.

Scott Taylor Won’t Stop Believing
Scott Taylor (R-Voter Fraud/Petitiongate) apparently isn’t going away. Seems he had smugly figured that, despite his campaign having been excoriated by a judge for having committed blatant voter fraud, the Republicans in Virginia Beach would be willing to hold their noses, swallow their honor, and vote for him anyway. Indeed, in the waning days of the campaign, he seemed to be almost magnanimous about being able to “own the libs” by being re-elected despite the very real legal jeopardy hanging over his campaign.

Unfortunately for Taylor – but fortunately for the Commonwealth and the country – he was wrong. But apparently he’s not ready to ride off in the sunset yet, and is thinking that a 2020 Trump campaign will bring out enough stalwarts to give him the win- and two years to give the independent/moderate/conservative voters who couldn’t stomach the cheating enough time to forget about it. I’m told he is riled up and sees his loss as a mere “fluke” that can be overcome.

That’s, of course, if he doesn’t get indicted in the interim. We’ll just have to wait and see!

Bryce Reeves Eyeing the 7th
Senator Bryce Reeves, (R-Wherever), ain’t happy, folks. First, his plan to gallop into the VA-05 race was dashed when his buddy, Rep. Tom Garrett, suddenly veered off-script in his “resignation” speech. Then he couldn’t convince anyone to “draft” him to run, nor could he convince now-Congressman elect Denver Riggleman (R-Nelson) to throw himself out of contention in their mini-convention. Now he’s facing re-election in a district that Ralph Northam only lost by a (literal) handful of votes, and that Tim Kaine won outright. Not only that, he’s now apparently facing a primary challenge!

I suppose it should be no surprise, then, that Reeves started looking at 2020 immediately after it looked like Abigail Spanberger was going to win in VA-07. Rumors have flown for a while this was the case. I understand there was some consternation in Republican circles after Reeves made sure “his people” were planted in the Brat team to help prep the road for him. Some are even saying he helped surreptitiously kneecap Dave in order to pave the road, and then helping to “convince” Nick Freitas not to run himself in 2020. Mr. Freitas, of course, is still under a cloud after having thrown a race for Senate he could have very well won, had he tried- which might’ve just saved the Virginia Republican party both the seats in VA-07 and VA-02.

Let’s hope Reeves sticks around, because if we can convince a talented Democrat like Culpeper town councilwoman Jamie Clancey, former VA-07 candidate Dan Ward, or former HD-30 candidate Ben Hixon to run in the 17th District, Reeves is going down, which will help clear the field for Abigail Spanberger’s re-election.

P.S. Note by Lowell – I’ve heard rumors that bat****-crazy theocrat State Sen. Amanda Chase, who believes her entire political career is being run by and for “god” (see screen shots below), is thinking about running in 2020 to take on – and get annihilated by, “god” willing, haha – Sen. Mark Warner. Do it!!! 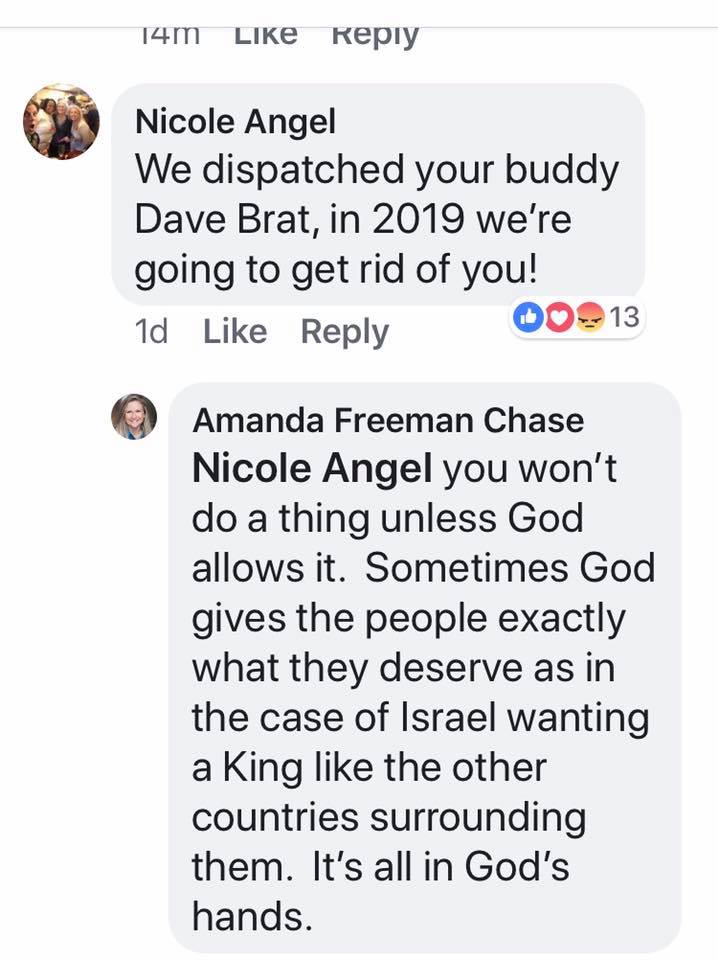 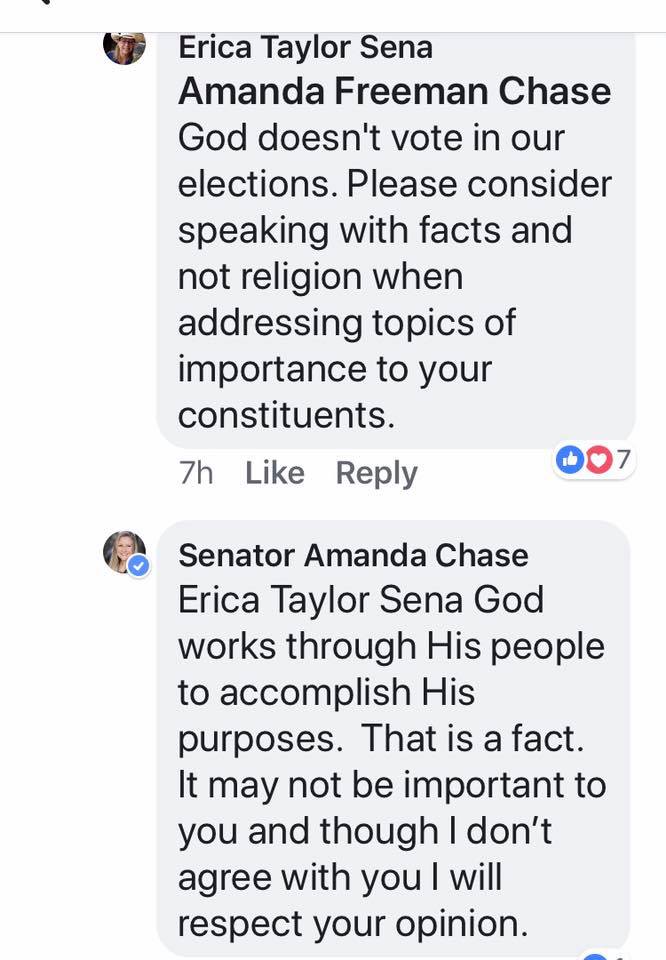