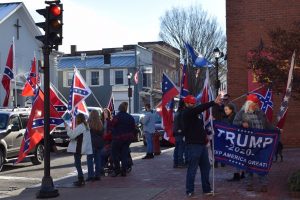 Oblivious. More than frightening. If so out of touch about his own base, how horribly can his administration be fumbling complex issues home and abroad? Some 180 miles southwest of his soapbox over mostly inadequately maintained interstate highways, the truth about his base: neither he nor they are American patriots.

“We are all equal. We are one team and one people proudly saluting one great American flag.”

They gathered last Friday. Just blocks from this corner in one direction, rabble students at Virginia Military Institute booed Justice Ginsberg during an appearance on campus when she mentioned her decision that led to the admission of the women, their fellow Keydets, sitting among them. In another direction newly minted Representative Ben Cline proudly embraced the “Freedom” Caucus (which he vowed to join during his campaign) at a breakfast advertised as an outreach effort to those who did not cast votes for him. There were maybe two there. He didn’t reach them.

Annually “Flaggers” run roughshod through Lexington on the ludicrous Lee-Jackson Day (“celebrated” by a wasteful state holiday); a local embarrassment to a proud city where Cline was outpaced by his Democratic opponent Jennifer Lewis. This year they mean to be out and about on Martin Luther King Day too; foisting flags and a heritage anathema not only to his memory but to the American dream and way.