Superb speech last night by Rev. Dr. William Barber…I already posted about the overall event, but I wanted to drill down more on Barber’s speech, because it’s so awesome (note: I will try to get to Al Gore’s also excellent speech later). See below for video and some transcribed highlights. And yes, every single politician in Virginia needs to watch this and take it to heart. NOW. 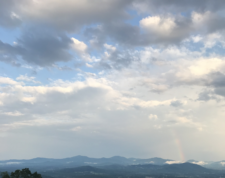 Somewhere Over the Rainbow: Justice for Rojai Fentress