I’ve had some major differences the past few years – mainly over the Columbia Pike streetcar project and also over her support for John Vihstadt – with Arlington County Board member Libby Garvey. In her latest email newsletter, though, I found myself strongly agreeing with her on this one. 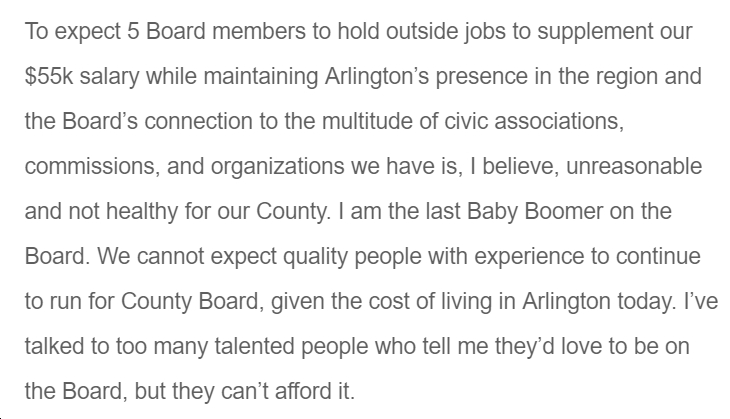 It also, of course, applies to the Virginia State Senate and House of Delegates.

The bottom line is that it is absolutely absurd that top elected officials – whether on County Boards, City Councils or School Boards – in major jurisdictions, and also in the Virginia General Assembly: a) aren’t considered full-time, professional positions; b) aren’t compensated accordingly. The problems with continuing to act like we live in an agrarian, pre-modern, 18th-century world of “citizen legislators include:

So how do we remedy this? I’d suggest a combination of: a) professionalization (in a wide variety of ways, including full-time work and higher pay) of the legislature and of local County Boards, School Boards, City Councils, etc; and b) enactment of MUCH tougher campaign finance and ethics laws in Virginia. Until we do that, we can expect a set of perverse, damaging, corrupting incentives to persist at the state and local levels here in Virginia. Talk about “pound foolish!”