I mostly agree with Virginia political analyst Chaz Nuttycombe‘s latest House of Delegates and State Senate race ratings (see table and maps, below). Note that the latest ratings are (correctly) a lot less optimistic for Democrats than they were back in late January, just before the Northam, Fairfax and Herring scandals hit, and when Chaz was openly wondering whether House Dems could get to 60 seats this November. Post-February-meltdown-month-from-hell, Chaz has scaled back his outlook to a mere +1 for House Dems, as well as +1 for Senate Dems, both of which would result in ties in the respective chambers (50-50 in the House, 20-20 in the Senate) and presumably some sort of power-sharing arrangement(s).

Of course, it’s quite possible that by the fall, things will change – for better or worse – for Virginia Dems. I’m also not 100% confident that the Supreme Court will uphold new, racially “unpacked” district lines, although I’d say it’s likely that even this godawful SCOTUS will not reverse the lower court. We’ll see. If SCOTUS *does* reverse the new maps, then the House outlook will be worse for Dems. If not, then I think we’re looking at the key races being as follows: 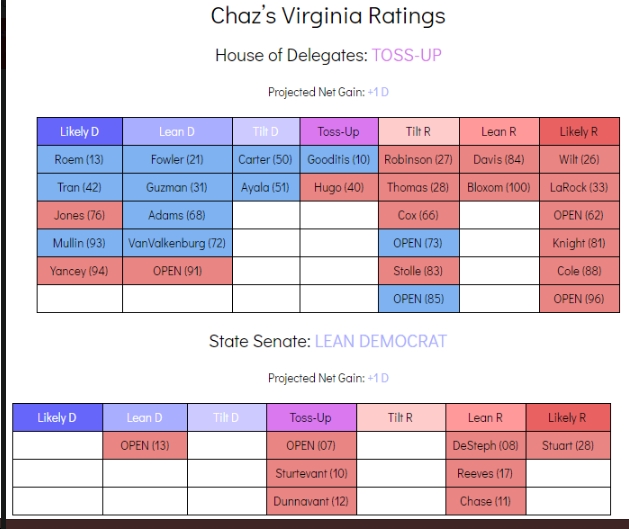