Richmond Times-Dispatch political columnist Jeff Schapiro has been out of the office for a couple weeks, but the time off doesn’t seem to have caused him to reassess his approach. Instead, it’s back to the usual: “both-sides-ism” and false equivalency between the Republican and Democratic Parties — and lots of it.

Today’s column is, as usual, behind a paywall, but someone emailed it to me, so I was able to read it. My reaction is very similar to that of Democrat Sally Hudson, who is running for the Virginia House of Delegates from Charlottesville and Albemarle County: “staggering both-sides-ism…one party told a credibly accused assaulter he can’t be the face of a fundraiser,” while the other party “may purge a sitting legislator for giving people health care.” 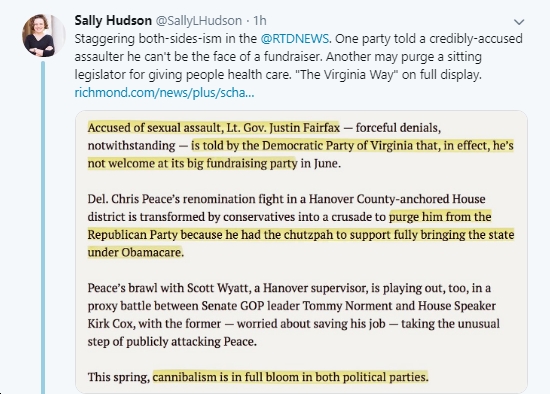 Yep, according to RTD columnist Jeff Schapiro, somehow “cannibalism is in full bloom in both political parties,” that “[i]t is forcing candidates and incumbents to adopt increasingly narrow views, lest they offend activists for whom extremes are mainstream,” and that this “is making the parties indigestible for those whose votes count the most: ordinary Virginians,” as “Democrats and Republicans” engage in a “deliberate effort…to demonize those who, by action or attitude, donʼt subscribe to the current conventional wisdom ultimately threatens the partiesʼ future growth.”

Wuuuuut? Yeah…nope, that narrative is not true at all. In fact, only *one* party in Virginia – and nationally – has lurched outside the mainstream, while the other one is in the majority or plurality on basically every single issue. The former would, of course, be the Party of Trump, formerly the Party of Bush/Cheney, also the Party of Mitch McConnell, Paul Ryan, Newt Gingrich, Ted Cruz, climate science denial, xenophobia, white nationalism, etc.

The other party, the Democrats, are the folks who supports quality/affordable health care coverage for everyone; a great/affordable public education for everyone; a healthy environment for everyone; aggressive action against the existential threat of man-made global climate chaos; reality-based respect for science, empirical evidence and reason; expanded voting rights, equal rights, and civil rights; civil liberties; international engagement with our allies and against anti-democratic forces; etc, etc.

Now, can someone please tell me how even one of those things in any way, shape or form falls outside the mainstream or is “extreme” in any way? Also, can someone please tell me how *any* of those things represent “narrow views?” Nobody can, of course, because again, Democrats’ stands on the issues do not reflect Jeff Schapiro’s false-equivalence-on-steroids, but the majority and/or plurality of the American public.

I’d also note that, with regard to Ralph Northam’s “blackface” scandal, Democrats almost unanimously condemned him and called for him to resign. Meanwhile, when faced with examples of racism, often much more recent and virulent (e.g., Donald Trump), do we ever hear Republicans condemning and/or calling for their leaders to resign? Of course not. For instance, have any Republicans condemned and/or called on State Senate Majority Leader Tommy Norment to resign, following news that he “was an editor for VMI yearbook filled with racist photos and slurs,” and after news that “students in a college course Norment taught at the William & Mary say that he routinely made racially insensitive and transphobic comments, forced students of color to defend Confederate iconography, and even defended the university’s defunct Brafferton Indian School that educated Native American kids — often without their family’s consent — in the 1700s?”

Of course Republicans haven’t condemned Norment or called on him to resign, because: a) they presumably have no problem with Norment’s behavior and/or b) they are loyal to their “team” above all and won’t break with it no matter what.

So yeah, Northam hasn’t resigned. Nor has Justin Fairfax. But reality check: there’s no mechanism in Virginia, other than perhaps impeachment/conviction, to *force* either of those men to step down. And yet, according to Schapiro, somehow Dems are at fault for…what? Exactly what does Schapiro think Dems should be doing at this point? And how, in any way, does this equate to a Republican Party which has several efforts underway to unseat Republican incumbents who – horror of horrors! – voted to provide health insurance coverage, already paid for by Virginia taxpayers I’d add, to their constituents through expansion of Medicaid under the Affordable Care Act, which last I checked remained the law of the land (and pretty popular too, at 50% favorable-38% unfavorable as of April 2019)?

Again, please tell me what the “narrow views” are that Democrats supposedly hold. Wanting to address climate change by moving to a clean energy economy – solar, wind, etc? That’s both necessary and highly popular. Expanding health care coverage to everyone in this country? Also both necessary and popular (except possibly among Republicans, the insurgent outliers). Protecting women’s reproductive health and freedom? Again, very popular, except among right-wing Republicans. Commonsense gun violence prevention measures like universal background checks? Again, very popular, except among Republicans. We could go on all day with this, but you get the idea…check out PollingReport.com for yourself, if you’re interested.

Bottom Line: The corporate media can (and, sadly, will!) repeat, ad nauseum, their false equivalency and “both-sides-ism” preferred narrative, as Jeff Schapiro did (yet again) in his column this morning, but that will not make it reality. Instead, at this point in our country and our Commonwealth, the fact is that the gulf between the centrist/center-left Democratic Party and the far-right/”insurgent outlier” Republican Party couldn’t be greater. And that won’t change no matter how many corporate media reporters and/or columnists try to ram their false equivalency narrative down our throats.