Virginia political analyst Chaz Nuttycombe appears to be hard at work, even on this beautiful Memorial Day weekend. 🙂 This time, he’s busy examining SD-28, a sprawling (parts of Stafford/Prince William/King George/Spotsylvania/Westmoreland counties) “red” district where Democrats have only a slim chance (sadly) of winning this November – in a “HUGE blue wave” scenario, as Chaz correctly puts it.

With regard to Chaz’s reference to one of the Democratic candidate’s (Laura Sellers) alleged “Islamophobic” comments against the other Democratic candidate (Qasim Rashid), see here and here for more. I’ve also copied and pasted the Facebook posts below Chaz’s analysis, along with an email from the Vice Chair of the Stafford Democratic Committee. So yeah, the Democratic primary in SD-28 has gotten nasty and divisive, which is very unfortunate, and of course completely unacceptable to the extent that any Islamophobia was expressed. 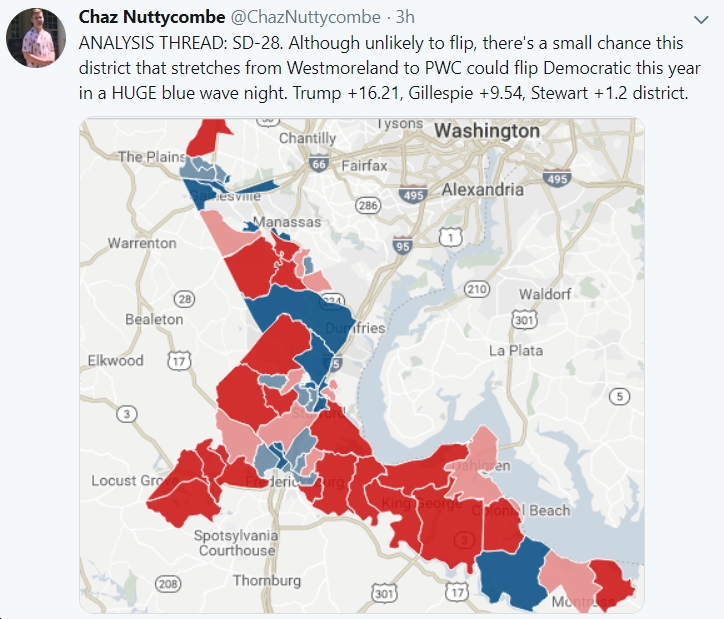 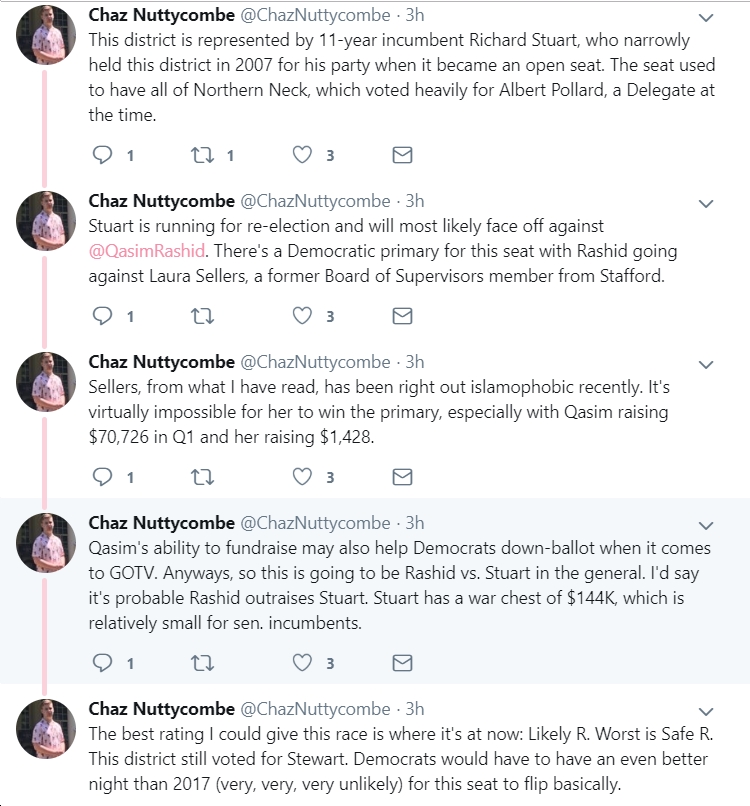 I came came across something today and it prompted me to open up about an issue that has been weighing on my mind.

Since I started this campaign for the House of Delegates, I have been more measured, tempered, and more politically correct than I’ve ever been. Well, it’s not me and that’s just not my style.

I am not known for being meek or fearful. I am a fierce advocate and when I see wrongdoing, I call it out. I believe that to remain silent is to be complicit.

Friends, I have learned over the past several weeks that Laura Sellers, Democratic Candidate for Senate 28, has launched an attack campaign against her primary opponent, Qasim Rashid. It is alleged that she has made derogatory statements about his islamic faith, his electability, and accused him of supporting “Sharia law” and female genital mutilation in an attempt to smear his good name.

This is not the way Democrats treat people regardless of race, background, or religion. Denigrating another for political gain is harmful to our party, to our community, and, in this instance, to Qasim and his family.

This conduct is unacceptable and I feel compelled to take a stand against it. Qasim is a good man who cares deeply about the community and shares our most cherished values. We would do well to have him in the Virginia Senate.

Bringing down another to elevate oneself is poor leadership. Even worse, this particular behavior is islamophobic- or at very least- intended to stimulate the unconscious bias and generate fear. Because of that, I call upon Laura to acknowledge her wrongdoing and publicly apologize to Qasim. I further call upon her to withdraw from the Senate race; we cannot tolerate people who engage in this sort of behavior representing us in Richmond.

As a rule, I do not endorse in contested primaries. This does not mean, however, that I am blind to what is happening and deaf to what is being said on the campaign trail.

Hate. Lies. Rumors. Smear tactics. Racism. Islamophobia. None of these things should ever be a part of a political campaign. Sadly, in the 28th Senate District Democratic Primary, these are all things which are being used by Qasim Rashid’s opponent in a desperate attempt to win an election. This kind of campaign is unbecoming of anyone calling themselves a Democrat and it is patently un-American.

These shameful and abhorrent tactics must stop now.

As I stated previously, I do not endorse in contested primaries. That’s why rumors of my – or my campaign team’s – support for either candidate in SD28 are absolutely and categorically false.

I call on all Democratic candidates throughout our great Commonwealth to stop using negative campaign tactics and focus on the issues that are important to hardworking Virginia families. Doing so will guarantee that we flip both the House and the Senate in Richmond on Election Day. Given the regressive laws we’ve seen being passed in other states, the future of Virginia depends on it.

Click to enlarge the following email from the Vice Chair of the Stafford County Democratic Committee, Kim Cummings. 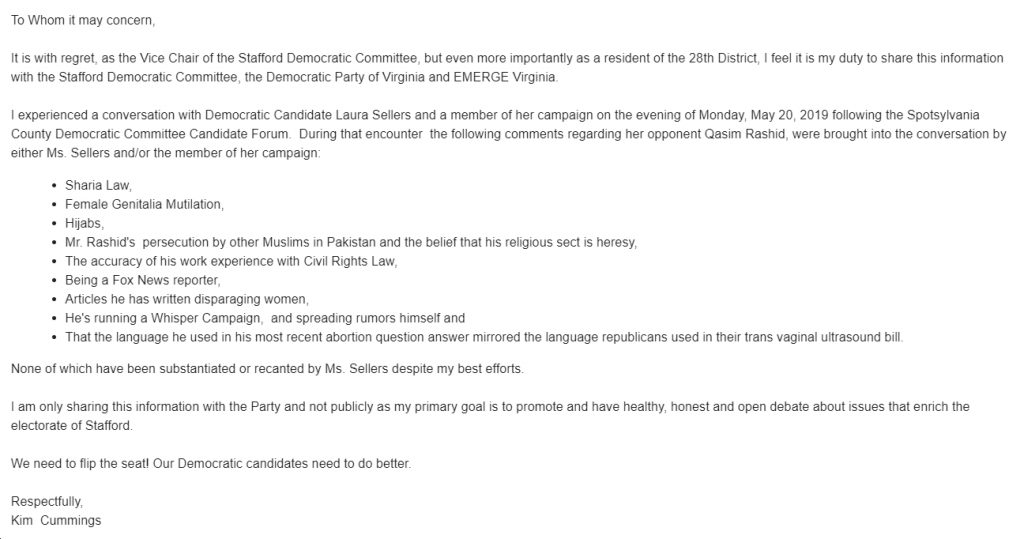