See below for powerful video, courtesy of the Coalition to Stop Gun Violence, as “VirginaBeach resident @JLRVista [Jeanette Richardson], whose son Patrick was shot and killed on New Years Eve 2004 pleads with Majority Leader @TommyNorment to address the issue of #GunViolence in the Commonwealth.”

Keep in mind, as you watch the video and think about the preventable tragedy that just took place in Virginia Beach, that Tommy Norment’s, Kirk Cox’s, Glen Sturtevant’s, etc. Republican Party blocked a slew of gun violence prevention bills this past session, including SB1748 (by Sen. Adam Ebbin), which would have “prohibit[ed] any person from importing, selling, bartering, or transferring a firearms magazine designed to hold more than 10 rounds of ammunition” and would have “reduc[ed} the number of rounds of ammunition that a firearms magazine will hold in order to be defined as an ‘assault firearm’ from more than 20 to more than 10.”

This bill was killed – “passed by indefinitely” (“PBI”) in the lingo of the Virginia General Assembly – with eight Republicans (Tommy Norment, Mark Obenshain, Ryan McDougle, Stuart, Bryce Reeves, Glen Sturtevant, Mark Peake, Ben Chafin) all voting to “PBI” it, and six Democrats (Dick Saslaw, Janet Howell, Louise Lucas, John Edwards, Creigh Deeds, Chap Petersen) all voting to move the bill forward. This November, keep this in mind as you head to the polls. Actually, keep it in mind from now until November, as you do everything you can to help Democrats win in November, take back the Virginia General Assembly, pass bills like SB1748, and hopefully prevent – or at least reduce the risk of – another mass shooting like the one that just happened in Virginia Beach from ever happening again.

.@SpeakerCox and @vahousegop continue to do the bidding of the @NRA @ChrisCoxNRA. — while Virginians are dying. 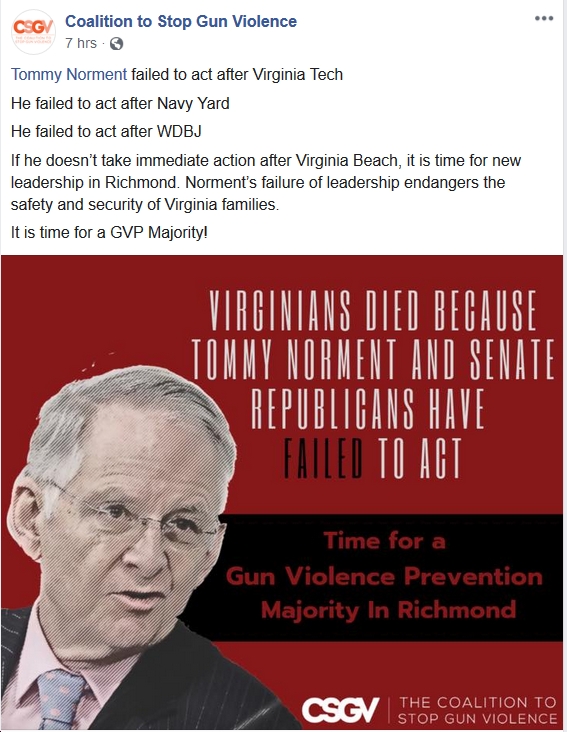 Former VA Lt. Gov. Bill Bolling, a Conservative But Non-Trumpist Republican, Asks, “why does the GOP insist on self destruction by nominating fringe candidates...