See below for an interesting infographic by VPAP. Takeaway #1 is that Virginia freshmen Democrats (e.g., ones elected to the House of Delegates in the “blue wave” of November 2017) are relying FAR less on campaign cash from companies and trade associations with registered lobbyists compared to past cycles. Specifically, freshmen House Dems so far have received 6% of their campaign funds from business donors, down from 29% during 2008-2016. That’s a good thing, IMHO.

By FAR the largest single-interest donor (almost $400k) for freshmen House Dems, by the way, has been Michael Bills, combined with Bills’ “Clean Virginia Fund.” And the largest out-of-state donor ($100k to Del. Jennifer Carroll Foy) has been Karla Jurvetson – “after the election of Donald Trump in 2016, her political donations to Democratic candidates dramatically increased to $6.9 million in advance of the 2018 midterms, making her the third highest woman political donor in the nation.” Another big out-of-state donor has been Milwaukee County Executive Chris Abele, who has donated $85k to Del. Danica Roem. Anything else jump out at you? 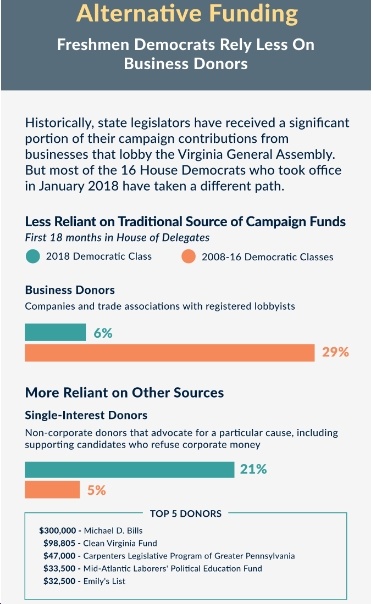 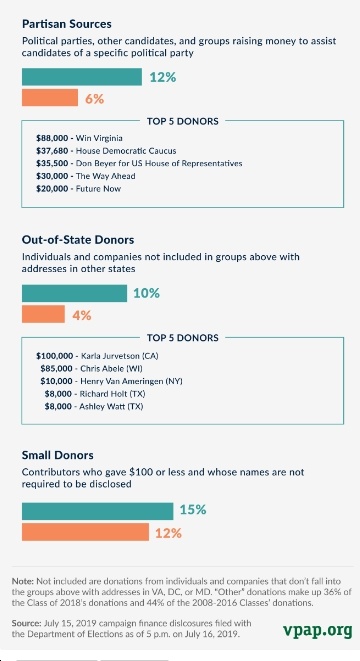