Traditionally (or at least pre-Trump), during party primaries, Republican candidates have tended to move to their hard-right (while Democratic candidates have tended to move a bit to their left), then generally have edged back to the “middle” for the general election in November. Well, looks like we’ve just seen a stark example of this, at least rhetorically, in SD7, with GOP State Senate nominee Jen Kiggans.

Back in May, during her primary against Republican rival Carolyn Weems, I wrote about Kiggans and the shrill, hard-right views on women’s reproductive freedom she was expressing back then. For instance, at that time, Kiggans was busy claiming that the Kathy Tran late-term abortion bill video, which Kiggans incorrectly/absurdly referred to using the word “infanticide” (which of course nobody supports and which the bill had nothing to do with) was “the turning point for [her]” in deciding to run for State Senate. More broadly, Kiggans also used Fox-style, over-the-top language, like “we can’t continue down this path of socialism” and “I missed the memo that women did not have equal rights…I don’t need a piece of paper…I think the ERA could overturn some laws…that benefit women.” Clearly, at that time, Kiggans was either showing her true beliefs or running to the hard right in order to win the primary. Which she did, by a narrow (51.6%-48.4%) margin. So maybe her strategy worked?

Well now it’s mid July, a month after the Republican primary, and guess what? Yep, Kiggans’ language, at least related to abortion, has changed significantly (see “before” and “after” screen shots, below). Now, post-primary Kiggans appears to have removed all mention of “infanticide” from her issues page. In place of the “Infanticide” section, Kiggans’ website instead now outlines her plan to provide women alternatives to abortion. Moderate (sounding)!

As if that’s not enough, Kiggans now also emphasizes her (supposed) support for “affordable and quality women’s healthcare.” I know; right, suuuure she does. But if Donald Trump has taught Republicans anything, it’s that there’s no penalty for being dishonest with/lying to voters. Recall that Trump himself used to claim he was “very pro-choice?” And recall that on guns, Trump used to say he supported a “ban on assault weapons” and “slightly longer waiting period to purchase a gun.” Now? Forget all that, as Trump’s strategy is all about firing up his hard-right “base,” since apparently he’s given up on winning over anyone who isn’t in said “base.”

Anyway, back to Jen Kiggans, whose issues page now looks quite moderate, including the section that used to be headed “LIFE” and “Infanticide,” but is now called “FAMILIES.” And hey, Kiggans even claims to now support “our constitutional right of equality for all,” after railing agains the ERA back in May. Pretty clever, eh? Or just pretty dishonest, maybe?

So why would Kiggans do this? Hint: because the district she’s running in, SD7 (96% Virginia Beach, 4% Norfolk), is a blue-leaning district that went for Democrats Northam/Fairfax/Herring in 2017, and by both Democrats Elaine Luria and Tim Kaine (14 points over Republican Corey Stewart) in 2018. And because Kiggans undoubtedly figures she can’t win this district, particularly against a strong Democratic opponent (Cheryl Turpin) who’s outraising her “bigly,” relying on hard-right voters alone. So, at least on the one issue of “LIFE/Infanticide,” as she called it during the Republican primary, Kiggans has now gone all (faux) “moderate” on us. The only problem is, how can anyone – right wingers who supported her in the primary or more moderate voters this fall – believe she’s sincere now on ANY issue, when her language has changed so suddenly and dramatically on this one? Got me. 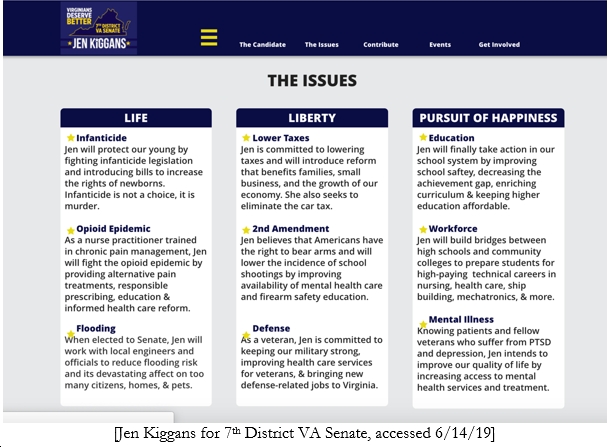 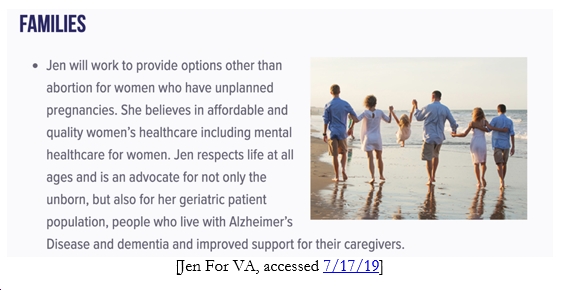