Last night, the Virginia House and Senate Democratic caucuses sent out a joint statement which read:

“We will not be attending any part of the commemorative session where Donald Trump is in attendance. The current President does not represent the values that we would celebrate at the 400th anniversary of the oldest democratic body in the western world. We offer just three words of advice to the Jamestown-Yorktown Foundation: ‘Send Him Back.'”

I agree 100% with that. In contrast, Rep. Elaine Luria (D-VA02) announced late last night that she WILL be attending – see her tweet, below – “because our democracy is not about the President or Congress.” Honestly, I’m not even sure what that means, as of COURSE our democracy is (in part) about the Executive and Legislative branches of government, as well as the rule of law, which Trump has repeatedly violated. Also note that VA02 is a highly diverse district – 23% African American, 7% Hispanic/Latino, 6% Asian American, 5% “Other” – while Trump is a nasty, racist, xenophobic @$!!#%@. I really fail to see how Trump deserves a positive welcome in that district, or anywhere in America really.

So what do you think?  See below for a poll on whether any Democrats should attend this event if Trump is there. I’m voting “Absolutely NOT, Trump’s a disgrace to our country.”

P.S. By the way, this anniversary is of “the company’s introduction of representative government to English America, which began on July 30 [1619] with the opening of the General Assembly.” Also that year was: “the arrival in the colony (in August) of the first Africans in English America. They had been carried on a Portuguese slave ship sailing from Angola to Veracruz, Mex. While the Portuguese ship was sailing through the West Indies, it was attacked by a Dutch man-of-war and an English ship out of Jamestown. The two attacking ships captured about 50 slaves—men, women, and children—and took them to outposts of Jamestown. More than 20 of the African captives were purchased there.” 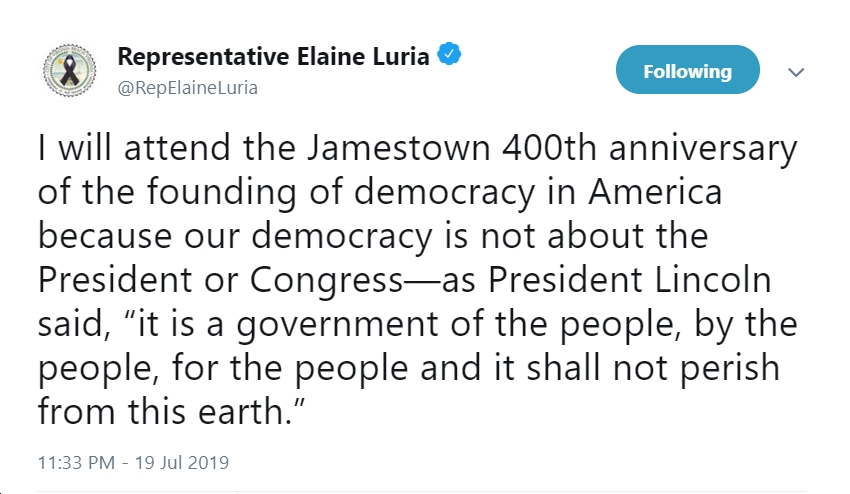