In recent weeks, a good chunk of the American press corps appears to have just discovered the nightmare we’ve known about in Virginia for ages – that being former State Senator, Attorney General, and 2013 Virginia GOP nominee for governor Ken Cuccinelli. The press corps is also discovering that Cuccinelli – who in recent days and weeks has made bizarre, unAmerican comments about the Statue of Liberty, about legal immigrants, etc. – has been like this for ages. For instance, see this morning’s CNN story about how Cuccinelli, now the acting director of US Citizenship and Immigration Services, “was a founding member of a group more than a decade ago that described undocumented immigrants as ‘foreign invaders’ responsible for “serious infectious diseases, drug running, gang violence, human trafficking, terrorism.'”

The group, State Legislators for Legal Immigration, was established in 2007, when an immigration revamp was being hotly debated in Congress. Its founding principle was that undocumented immigration represented an invasion of the United States on par with foreign invasion that should justify invoking war powers under the Constitution — extreme rhetoric Cuccinelli has continued to use in recent years, and that has been adopted by President Donald Trump and other Republicans.

On that same topic, recall that in October 2018, Cuccinelli talked to Breitbart “News” (of course!), claiming that:

“We’ve been being invaded for a long time so the border states clearly qualify here to utilize this [war] power themselves…And because [the states are] acting under war powers, there’s no due process…Literally, you don’t have to keep them, no catch-and-release, no nothing. You just point them back across the river and let them swim for it...When someone comes across your border without your permission, it’s an invasion. Their purpose here is to violate the border, to violate our sovereignty for their own purposes. That’s an invasion. “

Totally nuts. But yeah, that’s our “Cooch” for ya.  And again, this goes back many, many years. Don’t believe it? For some more background on Cuccinelli’s craziness and extremism, see below for a few video “blasts from the past” showing him in action. There are many more videos out there, but these are a few “highlights” to give you a flavor of what we’re dealing with here. And yes, Trump really does select the “best people” (translation: WORST people) for his administration.

P.S. Also, check this out…Cuccinelli actually proposed legislation to make it a CRIME for reporters to enter someone’s private property “within a week after the owner’s family ‘suffered a substantial personal, physical, mental, or emotional loss, injury or trauma.'” Note that the bill was “unable to get even one member of the committee to go along with his proposal, which was denounced by Sen. Henry Marsh (D-Richmond) as a ‘gratuitous, wholesale attack on the press.'” Also, the “committee’s counsel declared the bill ‘unconstitutional’.” 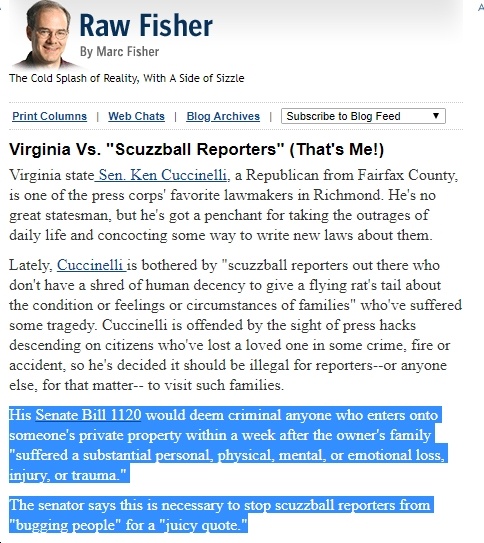 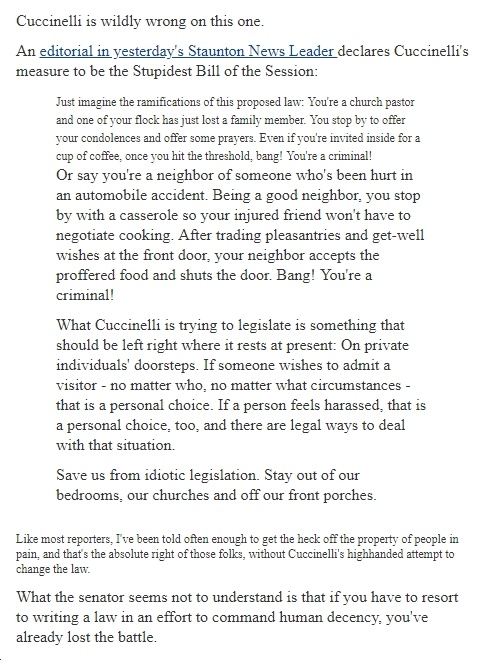