According to a petition filed this week with the Loudoun County Circuit Court by four registered Loudoun County voters, the Republican candidate running for Commonwealth’s Attorney, Nicole Wittmann, gave false information about her place of domicile when registering to vote in Loudoun County in order to qualify to run for office. The petition requests that her voter registration be cancelled, and she be disqualified as a candidate for office.

Nicole Wittmann and her husband and two children live at their home in Herndon, Virginia–which is in Fairfax County. According to the Virginia Constitution, the only requirement to run for office is that a person must have been a resident of the Commonwealth for one year preceding election and be qualified to vote for that office. So, for Wittmann to run for Loudoun County Commonwealth’s Attorney, she would have to register to vote in Loudoun County. To be able to vote in a district, a voter must have “domicile” there, which is defined as intending to make a permanent residence there, and having given up all connection with any prior place of residence. (Note that a person can have multiple residences, but only one domicile.)

According to the petition, on February 21 of this year, she changed her voter registration to an apartment address within Loudoun County, where Alex Rueda, one of the Loudoun County Deputy Commonwealth’s Attorneys lives. (Alex Rueda was a prosecutor on the infamous case of the two ten-year old boys who were charged with felonies for putting hand sanitizer in their teacher’s drink.) On the same day, Wittmann filed her Declaration of Candidacy, under oath, with the Board of Elections, listing the Loudoun County apartment as her address.

But according to the petition, there is strong evidence that Wittmann lived at the time, and continues to live at the Herndon address, with her husband and children. Her car is routinely parked in the driveway there late at night and early in the morning. She does not receive bills or mail at the address in Loudoun, but continues to receive utility bills at the Herndon address. The home telephone number listed on her Virgina Conflict of Interest statement is a landline issued to the Herndon address. This would be clearly described as having domicile in Herndon, not in Loudoun, making her ineligible to vote in Loudoun County, and her registration there false and invalid. Further, if she was ineligible to vote in Loudoun County when she registered there, her candidacy for the office of Commonwealth’s Attorney is also voided.

A few details to help understand how this may play out. According to the standards for cases like this, the burden of proof is on Wittmann to prove that she’s qualified. The petition will probably be fast-tracked onto the docket, and should be considered in the next 15 days. It’s not completely clear whether Republicans would be able to make a new nomination if Wittmann is found ineligible, but the argument should be that the Republicans did not report to the Board of Elections a valid nominee by the June 11th deadline, and therefore this would not fall under the “if the nominee withdraws” exception that allows a nomination at this late date.

The Commonwealth’s Attorney holds great power, and is in a position of trust in the community. In this case, the voters feel that one candidate for this position gave a “false declaration under oath” as to where she was domiciled. If the very first moment of her relationship with her constituents is defined by a lie, how can they ever hope to trust her? They can’t. And she “should be purged from the voter roll in Loudoun County and, as a consequence, she should be disqualified as a candidate for Loudoun County Commonwealth Attorney.” 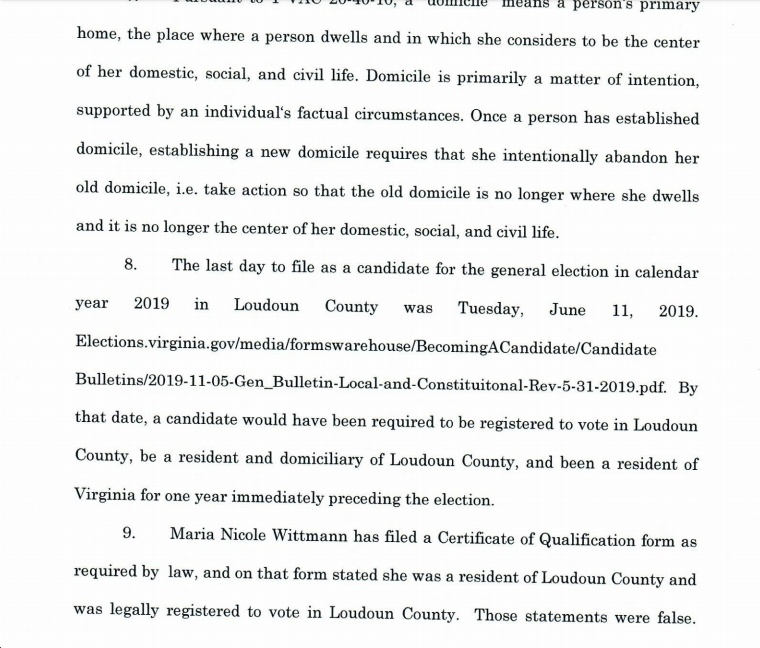 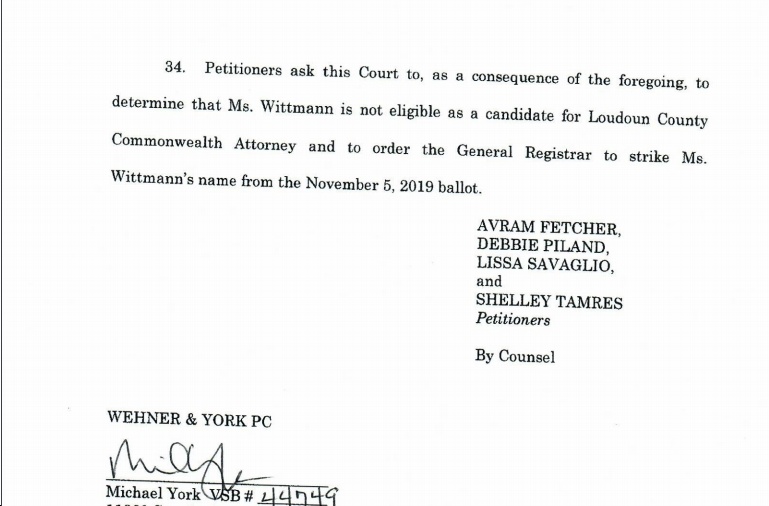