“Hat tip” to Don Rippert, over at Bacon’s Rebellion, for bringing this story to my attention:

That’s right; as you can see from the following table, overwhelmingly Virginia “ethics enforcement” is a complete joke, with “None or Limited Power” the key phrase. Meanwhile, of course, powerful corporate interests have enormous power, including the ability to give unlimited amounts of money to politicians – even in the case of a supposedly “state-regulated” utility like Dominion Energy. Not that this situation is anything new, of course; see this Blue Virginia article from 2014, for instance, which highlighted a report that ranked Virginia 47th out of 50 states – an “F” grade – in the area of ethics. Or check out Jeff Thomas’ writings on the “Virginia Way” as a cesspool of corruption. 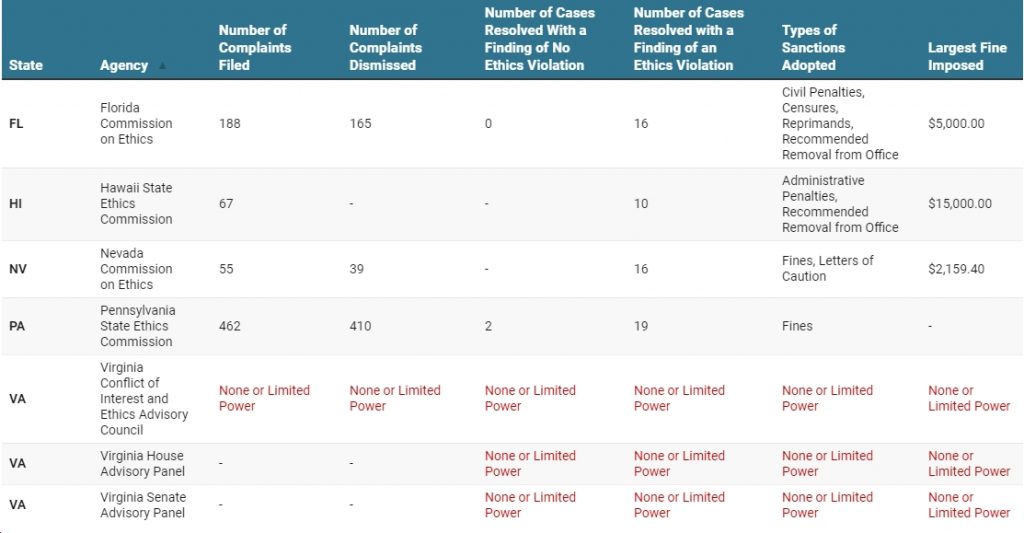 The result of Virginia’s disgracefully lax ethics enforcement is clear: a system heavily tilted towards those with the resources and power to “capture” the regulators and corrupt the legislators. Of course, that’s not going to be regular people like us. Thus, according to VPAP (which is also heavily “captured” by powerful corporate interests, but that’s another story), some of the top Virginia political donors over the years – aside from the political parties themselves – include…yep, Dominion Energy ($11.8 million), Altria ($6.8 million), Virginia Realtors ($5.8 million), Virginia Auto Dealers ($5.8 million), Verizon ($5.1 million), VA Bankers Assn. ($5.0 million), etc. And no, these folks are not donating millions of dollars out of the goodness of their corporate “hearts,” but because *they want stuff* and are hell-bent on getting it.

By the way, making the “Coalition for Integrity” ratings even more damning – and somewhat ironic – is the fact that this group is actually…well, check it out.

Transparency International USA had increasingly been seen in the United States as a corporate front group, funded by multinational corporations — the same multinationals that corrupt the U.S. political system.

It yearly gave its annual corporate leadership award to one of its big corporate funders.

Its board of directors was dominated by corporate lawyers, many of whom defend companies from charges of foreign bribery.

Other than the name change from Transparency International USA to the Coalition for Integrity, it’s unclear whether or not anything has changed.

It appears that the Coalition is still a corporate front group.

So…yeah, a “corporate front group” with a board of directors “dominated by corporate lawyers, many of whom defend companies from charges of foreign bribery,” has just said that Virginia’s ethics enforcement is so pathetically bad that it can’t even be rated. Is there irony in there? Or is it just pathetic? You decide. But the bottom line is we need major ethics reform in Virginia, including *of course* prohibiting state-“regulated” entities, and also corporations with business before the state, from donating money, lobbying, or in any way trying to influence legislation. Oh, and it should be illegal as well – with strong penalties for violations – for politicians and elected officials to accept money and/or meet with lobbyists from corporations with business before them. And, obviously, legislators should have to recuse themselves from voting on any issue where they could personally stand to gain, financially, by voting a particular way, including or excluding certain provisions in the legislation, etc.

But today, sad to say, we are far, far from any of that, with folks like Senate Majority Leader Tommy Norment (R) and Senate Minority Leader Dick Saslaw (D) – also known as the tweedle dee and tweedle dum of the “we’re Virginia, we don’t need no stinkin’ ethics laws!” – crowd. For more on Saslaw’s Stone Age views on this topic, see, “In Crude Language, Sen. Dick Saslaw Argues that Ethics Laws are Irrelevant, Unnecessary.” Sweet, huh? It sure is for Dominion, Altria, Verizon, etc. – just not for the people or environment of Virginia. But who cares about them, anyway, right? (snark)