On September 3, 2019, the Facebook account of the Fairfax County Republican Committee (FCRC) posted two articles in a row trashing transgender children and those who support them. This, along with instigating fears about (fictitious) busing proposals and keeping Confederate names on schools, seems to be their campaign platform for the year.

The caption on that second article was “Had enough? Vote Republican.” 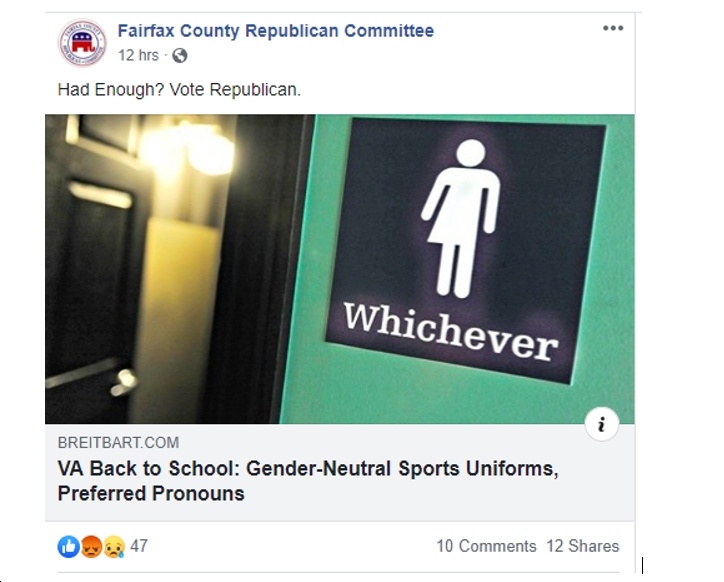 The Fairfax County Republican Committee seem to have had enough of acceptance of children who are not like themselves.

The Fairfax GOP’s endorsed school board candidates’ public image has borne that out:

That is not the Fairfax County I want to teach in. Thus, I support candidates who want to accept all children: that is, candidates who have not “had enough” of people who are different than themselves.

FCPS Pride has endorsed the following candidates. These are the people running who embrace the differences in our children:

Don’t forget to vote for these candidates on November 5th!

So after all this - a referendum, formation of this commission, etc. - new district lines could very well end up be drawn by the VA Supreme Court, which is a pretty conservative body. Just as many of us warned last year... https://bluevirginia.us/2021/09/monday-news-congress-braces-for-high-stakes-week-over-shutdown-default-and-infrastructure-gops-assault-on-voting-rights-is-the-real-fraud-trump-backed-youngkin-goes-semi-anti-vax-re#comment-5550538575 h/t @vaplan2018

For what it's worth (not much?), Terry McAuliffe up 3 points in this poll for the group "Power for Tomorrow," "a Virginia-based and Dominion Energy-connected group that opposes efforts to introduce greater competition to monopoly utilities" https://bluevirginia.us/2021/09/monmouth-poll-of-vagov-race-terry-mcauliffe-up-between-3-and-7-points-over-glenn-youngkin-with-36-days-until-11-2#comment-5550520128