Before we get what went down with the Prince William County Republican Party, a quick reminder about who their nominee for Chairman of the Board of County Supervisors is: yes, this guy:

Now, you might be thinking to yourself, what kind of political party would ever nominate someone this extreme, this crazy, this bigoted, etc? Very simple: today’s Trump Republican Party, in this case the Prince William County version of the Trump Republican Party. Check out the following tweets – as well as video – from last night’s County Board forum. As you’ll see, Gray REALLY starts going off the rails starting at around 53:45, when he’s first asked about his offensive/racist/etc. tweets, then when the candidates are asked which national figure they’d compare themselves to, and after Wheeler responds, “definitely not Trump…if I had someone to look up to, it might be Barack Obama.” On the tweets, Gray gives a lame excuse that supposedly they were actually just “retweets,” which is both irrelevant and also highly misleading, since Gray commented his deep thoughts along with many of those retweets.  According to Gray:

“Barack Obama had plenty of scandals; if you don’t think Benghazi was a scandal, then we need to redefine the word ‘scandal’. ‘Fast-and-Furious’…There is no administration that can go without a scandal. To say that Barack Obama didn’t have scandals is being very short-sighted.”

Of course, that’s all complete horse manure. In fact, about the worst “scandals” in the Obama administration were bogus, ginned-up faux “scandals” by the right-wing echo chamber, such as when Obama wore a tan suit (SCANDAL!), when he used a teleprompter, when he used Dijon mustard on a hot dog, when he went on vacation and/or golfed, and other such idiocy. Of course, what the right wingnuts found *truly* scandalous was that a black man named Barack Hussein Obama was president at all; that’s what they could never get over, and clearly what John Gray can’t wrap his racist-retweeting brain around. As for the Prince William County GOP, they took to…yep, Twitter (natch!) to spew out debunked conspiracy theories about President Obama. These people…ugh. 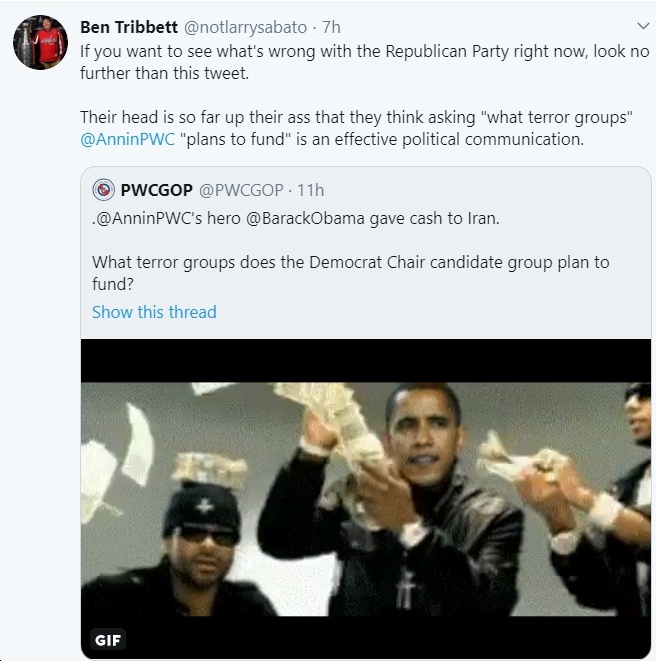 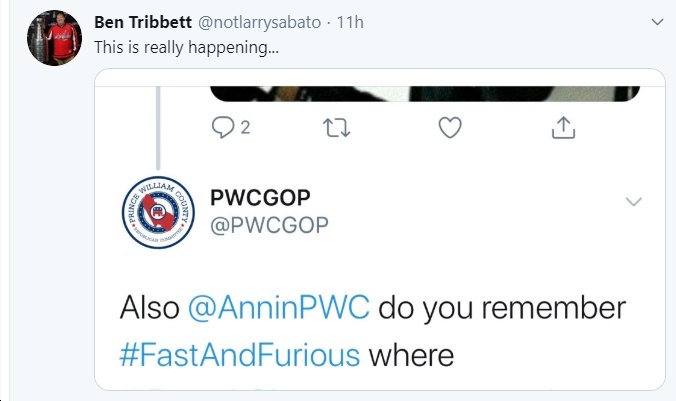 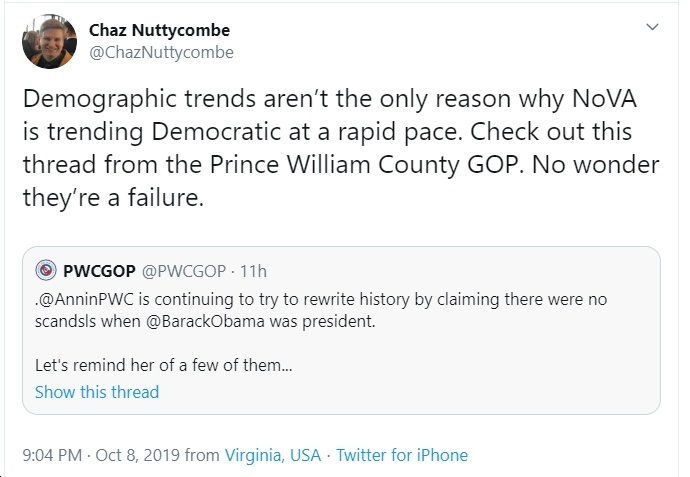 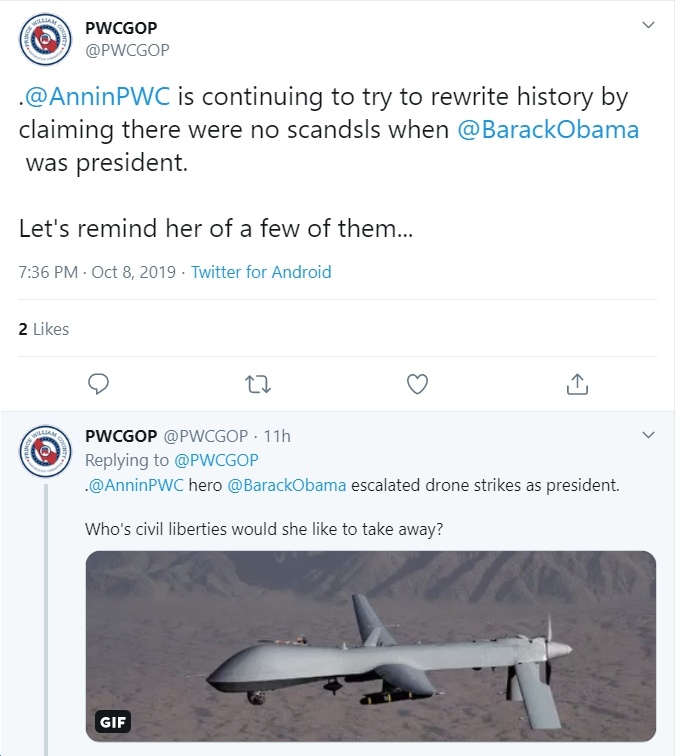 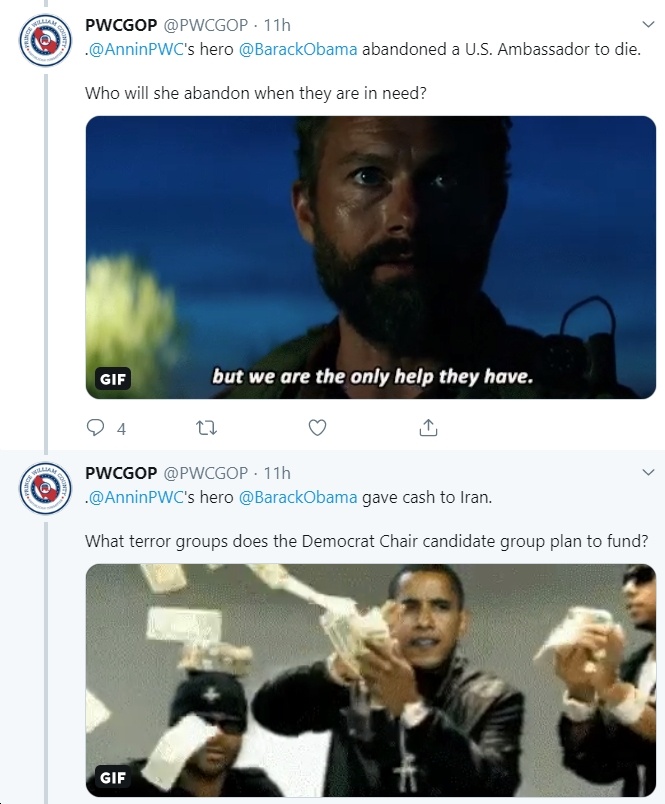 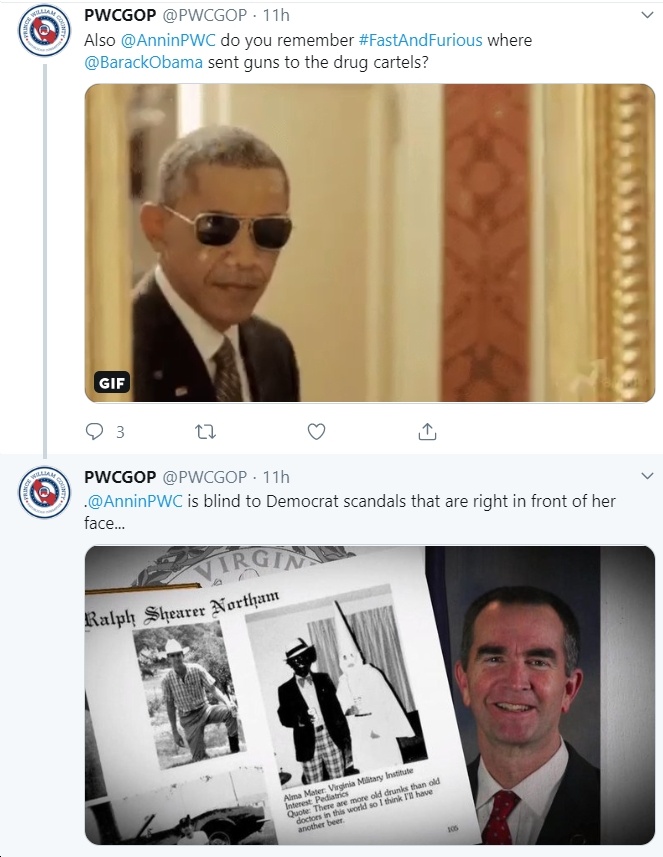