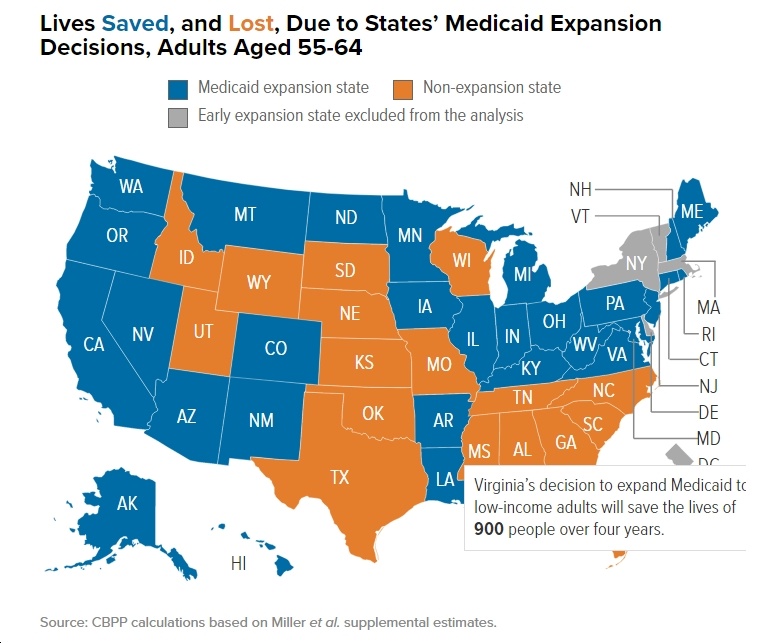 As we all know, Virginia Democrats pushed hard for Medicaid expansion under the Affordable Care Act for years, while the vast majority of Virginia Republican elected officials blocked it – obstinately, obsessively, and for no good reason whatsoever.

The cost of Republican opposition to Medicaid expansion was high in many ways. As Gov. McAuliffe pointed out in March 2017, for instance, failure to expand Medicaid meant that Virginia ” forfeit[ed] $4.6 million a day or $2.6 billion per year…already forfeited $10.4 billion to fund our health care providers…could probably create upward of 75,000 jobs with that money.” Plus, of course, Republicans’ refusal to expand Medicaid meant something like 400,000 Virginians were denied affordable, quality health care coverage. Undoubtedly, that led to people getting sick, and even dying, who wouldn’t have if they had had access to health care. How many people are we talking about? A recent study by the National Bureau of Economic Research, discussed here by the Center on Budget and Policy Priorities, lays it out (bolding addeed by me for emphasis):

The Affordable Care Act’s (ACA) expansion of Medicaid to low-income adults is preventing thousands of premature deaths each year, a landmark study finds.[1] It saved the lives of at least 19,200 adults aged 55 to 64 over the four-year period from 2014 to 2017. Conversely, 15,600 older adults died prematurely because of state decisions not to expand Medicaid. (See Figure 1; see Table 1 for state-by-state estimates.) The lifesaving impacts of Medicaid expansion are large: an estimated 39 to 64 percent reduction in annual mortality rates for older adults gaining coverage.

And here in Virginia? According to the NBER, we’re talking about an estimated 900 lives saved due to Medicaid expansion “over the first four years with expansion fully in effect.” Plus, of course, all the people who benefited from health care coverage, without it necessarily being a life-or-death situation. So…again, why did Virginia Republicans oppose Medicaid expansion? Because it was part of a program signed by President Barack Obama, who they hated for whatever pathological reason? Seriously, was there ever a serious reason given for their bordering-on-hysteria, “Obama Derangement Syndreom” opposition to this life-saving measure? Nope, didn’t think so.

On a relatively happier note, in the end Virginia Republicans paid a steep political price for their opposition to Medicaid expansion, as the “blue wave” elections in 2017, 2018 and 2019 were, to a significant extent, about the parties’ stances on health care, including Medicaid expansion. Note that in 2019, we actually saw Republicans suddenly claiming they had never actually opposed Medicaid expansion, it was all just a big misunderstanding or something. Fortunately, Virginia voters appear to have seen through that whopper for the most part, although it’s possible that Republicans’ efforts to blur the lines on their anti-Medicaid-expansion records could have helped Republicans like Sen. Siobhan Dunnavant eke out victories on November 5. Still, all in all, there’s little doubt that Virginia Republicans paid a political price for their harmful, indefensible, cold-hearted opposition to Medicaid expansion – and rightfully so! Let’s just make sure we don’t let them rewrite history on this one, as they so often try to do.