With Del. Nick Freitas (R-HD30) now an announced candidate for the Republican nomination in VA07, and with the nomination likely to be decided by a hard-core, right-wing convention, it’s obviously crucial for Freitas to nail down his pro-Trump bona fides. Which could be somewhat challenging, given that Freitas endorsed Ted Cruz in the 2016 Republican presidential primaries, but which also gives Freitas even more incentive to double down on the slobbering, fawning praise of Trump. For instance, on Trumpster radio this morning, Freitas went on and on about how he’s supported Trump unquestioningly since he was elected, and how he’ll totally have his back in a second term, if god forbid there is a second term. We’ll see if this works for Freitas in a Republican convention, but the strategy for Freitas is clear – hug Trump as tightly as he can.

Which is why it’s interesting that Freitas’s campaign manager, Joe Desilets, was involved with a scam PAC that knowingly conned loyal donors and supporters of Donald Trump in 2016. Check this out:

First, Google “Amagi Strategies” and “scam pac” and you get…this, from Politico (bolding added by me for emphasis).

An increasing number of unauthorized groups are invoking the presumptive GOP nominee’s name [Donald Trump] to raise money, suggesting that they’ll use the cash to support his campaign, even as some appear to be spending most of their money on contracts with favored consultants.

Trump’s campaign and its allies worry that the groups are doing little to help the campaign and may be doing more harm than good by siphoning off cash that would otherwise go to the campaign’s fledgling fundraising effort. The campaign has disavowed several of the groups, demanding they stop using the candidate’s name in fundraising appeals and calling at least one super PAC founded by a Trump adviser a “big-league scam.” But appeals keep coming from other groups, with more now joining the scrum, and rival groups accusing one another of being scams.

An outfit called Restore American Freedom and Liberty has blasted out emails trumpeting the latest polls showing Trump tying Hillary Clinton, ending with a big red CONTRIBUTE button. According to its campaign finance disclosures, the group has raised more than $215,000 but spent just $2,000 on ads — split between Ted Cruz and Ben Carson. Most of the money went to a New York company called Amagi Strategies, for what the disclosures said was fundraising, management and research.

Amagi Strategies, eh? Google them and let’s see what we get. First off, there’s this info from Open Secrets; note all that money flowing into Amagi Strategies from PACs like “Restore American Freedom & Liberty” (noted in the Politico story, above, as raising “more than $215,000 but [having] spent just $2,000 on ads – split between Ted Cruz and Ben Carson,” and with “most of the money” going to Amagi Strategies for “fundraising, management and research”) and “Patriots for Economic Freedom” (called out here by none other than Laura Ingraham for being a “scam”). 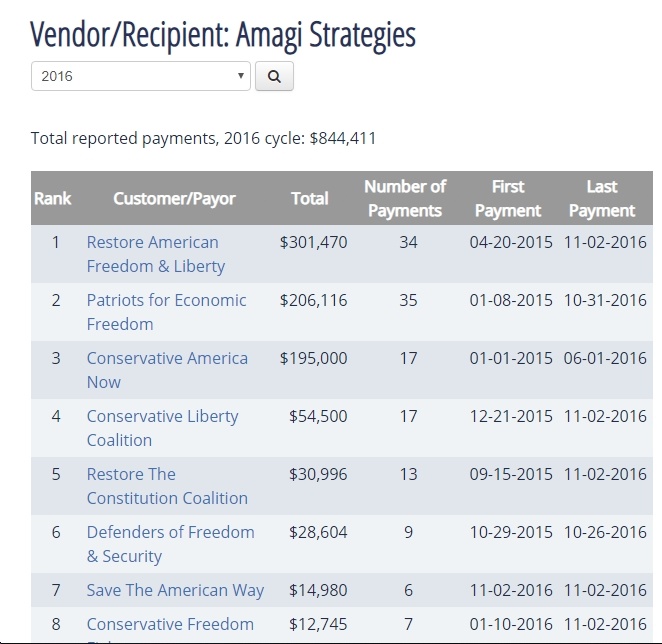 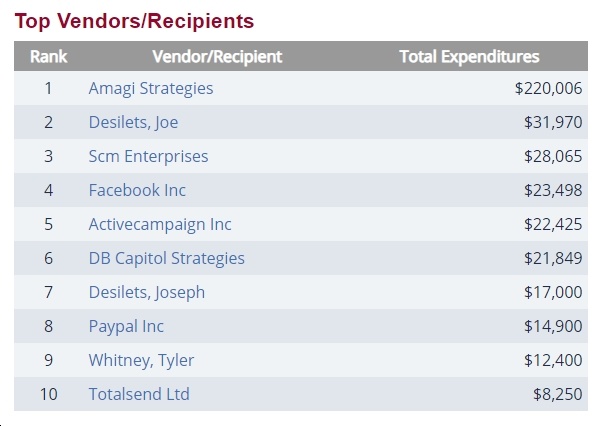 To summarize: Amagi Strategies has a history of setting up scam PACs that purport to support Donald Trump and conservative causes, but with only a very small percentage of the funds raised actually going to support Trump. Instead, almost all of the funds appear to have gone not to Trump, but to the consultants at…yep, Amagi Strategies, including — wait for it — Joe Desilets, who is now Nick Freitas’ campaign manager. Sweet arrangement, eh?

UPDATE: Also see East Village apartment is a haven for questionable super PACs, which writes that:

“‘Restore American Freedom and Liberty’ is a super PAC that claims to support conservative candidates for office, but most of its donations end up going to a consulting firm run out of an East Village apartment.

The PAC has raised $181,666 during the 2016 election cycle, according to its Federal Election Commission filings. But it has only spent $2,000 on independent expenditures to support Republican presidential candidates Ted Cruz and Ben Carson. The bulk of the group’s money—$147,500—has gone to Amagi Strategies, a consulting company run out of a fourth-floor apartment in lower Manhattan.

Records show the super PAC and the consulting company are run by the same man: Tyler Whitney, a 27-year-old with a history of running controversial fundraising ventures.”

And check this out:

The pro-[Roy] Moore hybrid PAC turned in the forms to the FEC five days late. The filings show the group garnered $26,000 in small-dollar donations in the last four months.

They also show Patriots for Economic Freedom spent almost all its money, or $90,000, on a consulting firm called Amagi Strategies for sympathetic email campaigns that cast doubt on Moore’s accusers and blame the “D.C. establishment.” Amagi Strategies is a New York City-based firm that shares an address with Patriots for Economic Freedom, a fourth-floor East Village apartment. Amagi is run by 29-year-old Tyler Whitney, the founder of the super PAC that employs it. Whitney ran a similar PAC that claimed to raise money to support conservatives, Conservative America Now, that benefited Whitney’s own firm.

Whitney did not return multiple requests for comment, though in 2014 he told Breitbart that Patriots for Economic Freedom “is just another grassroots conservative PAC trying to make a difference.”

Oh, and gotta love this from 2014…”Patriots for Economic Freedom” was busy asking for checks to help Dave Brat, but only contributed $1,003 to Brat (out of $496,749 in receipts that cycle) vs. around $49k to Joe Desilets in that cycle. 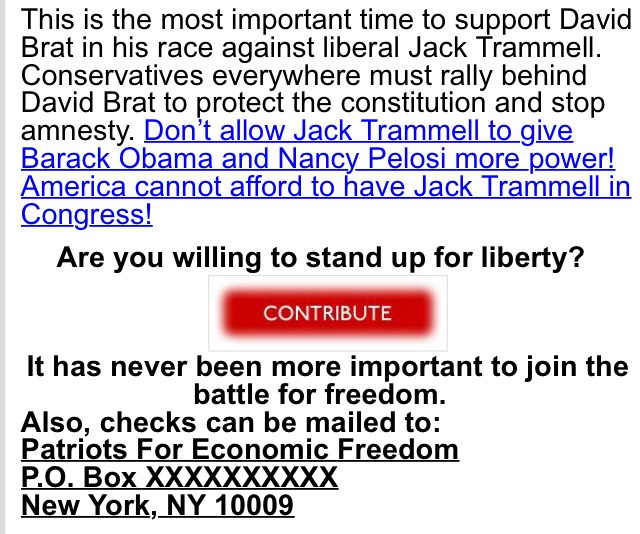