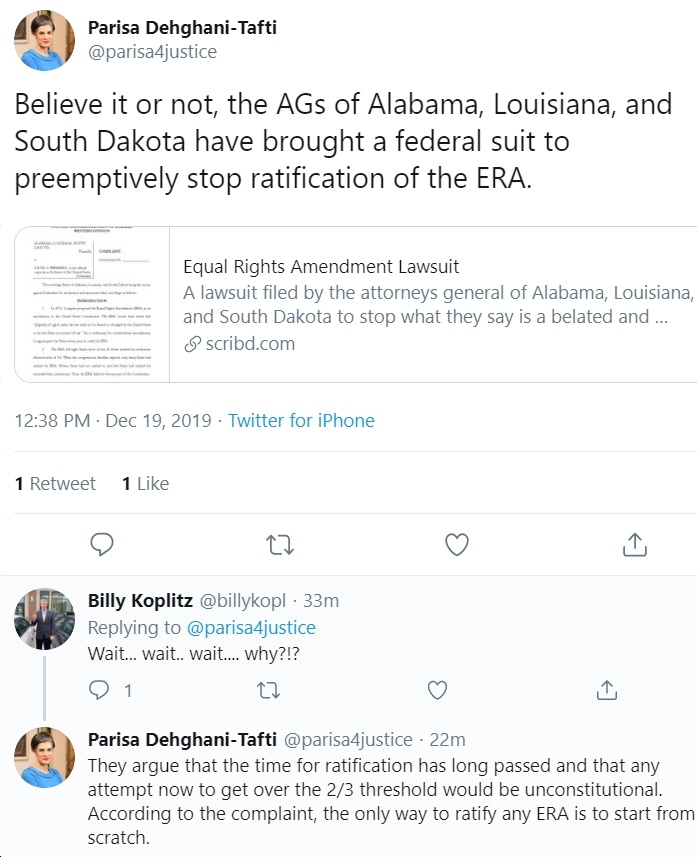 Here we go; just as Virginia prepares to ratify the Equal Rights Amendment (ERA) in January 2020, three “red” states – Louisiana, South Dakota and Alabama – have filed suit (see below) to stop it dead in its tracks, by declaring the whole thing unconstitutional.

That’s right; as incoming Arlington/Falls Church Commonwealth’s Attorney Parisa Dehghani-Tafti explains, the Attorneys General from these three Republican-controlled states “argue that the time for ratification has long passed and that any attempt now to get over the 2/3 threshold would be unconstitutional. According to the complaint, the only way to ratify any ERA is to start from scratch.” Also, according to the complaint:

“Five States—Nebraska, Idaho, Tennessee, Kentucky, and South Dakota—have rescinded their prior ratifications of the ERA. And they did so before the congressional deadline expired. Thus, these States have not ratified the ERA.”

The lawsuit notes that Virginia “will almost certainly be the next State to ‘ratify’ the ERA,” most likely “within the first seven days of session.” Which is accurate, except for the air quotes around the word “ratify,” that is. Which means that, in the end, what’s likely to happen is that Virginia will become the 38th state to ratify the ERA (counting the five states which have voted to rescind their ratifications) in January 2020, to be followed by a torrent of litigation from forces opposed to enshrining women’s equality in the U.S. constitution. The outcome? Who knows, but given the rightward lean of the U.S. Supreme Court, as well as Mitch McConnell’s relentless campaign to stack the federal judiciary with right-wingnut judges, it’s hard to be particularly optimistic these days. Still, let’s ratify, and then fight it out in court, even if it takes years – because it’s the right thing to do.

VA Sen. Chap Petersen (D) vows that "this issue [of an 'off ramp' for masking of children in schools] must be solved in the next few weeks. We will not adjourn the 2022 session without a resolution." https://bluevirginia.us/2022/01/virginia-covid-19-cases-up-118188-over-the-past-10-days-hospitalizations-fallinghas-the-omicron-wave-finally-started-to-recede#comment-5712271456