With the gun “sanctuary” movement spreading through Virginia – as of Friday morning, there reportedly were 89 counties, cities or towns declaring themselves 2nd amendment “sanctuaries” – where do our state’s political leaders stand on this issue? See below. Will add more if/when they are available…

Gov. Ralph Northam, who is “F”-rated by the NRA, says: “If we have constitutional laws on the books and law enforcement officers are not enforcing those laws…then there are going to be consequences, but I’ll cross that bridge if and when we get to it.” 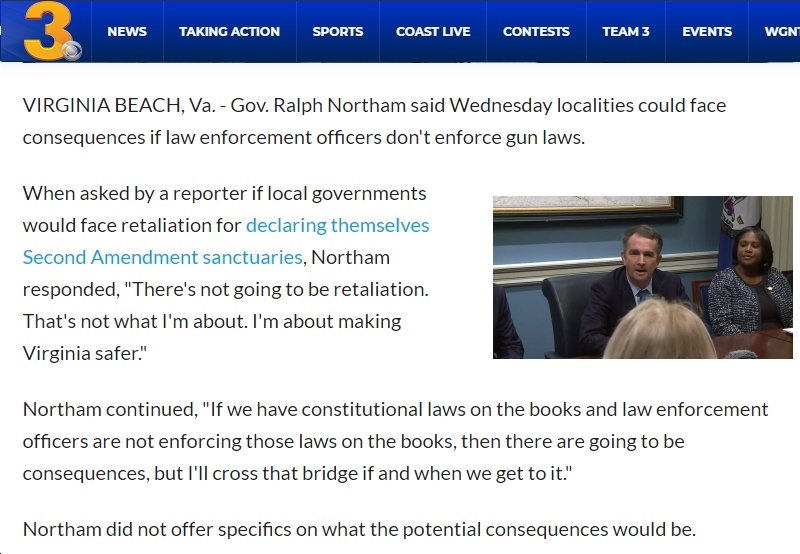 Northam also has said, through a spokesperson, “In this case, the governor’s assault weapons ban will include a grandfather clause for individuals who already own assault weapons, with the requirement they register their weapons before the end of a designated grace period…Additional details on this and all other bills will be announced prior to the start of the upcoming session.”

Virginia Attorney General Mark Herring, who the NRA called “one of the most anti-gun lawmakers in Virginia history,” says: “These resolutions have absolutely no legal effect whatsoever…I feel confident that when the legislature passes these laws in the next couple months, they will be enforced and they will be followed.”

Sen. Mark Warner, who received a 0% score from Gun Owners from America in 2017-2018 and a 100% score from the Brady Campaign to Prevent Gun Violence in 2015-2016, says: “I think it’s a little ironic that some of the very folks who were complaining about other communities declaring themselves sanctuary cities about undocumented immigrants people coming into this country are now declaring themselves sanctuary cities on second amendment rights. Listen, I’m a supporter of the second amendment, but I believe there are reasonable gun safety laws that the overwhelming majority of Virginians support – things like universal background checks, things like making sure that if somebody’s had a history of mental illness we ought to have some kind of red flag or other notification so someone doesn’t get access to the firearm.  I do think there’s a legitimate debate to be had about some of the military assault weapons that frankly aren’t used for hunting, but whether they should be appropriate items for sale. My fear is there’s been a lot of over-the-top rhetoric based upon the notion that people are going to, in a sense, take away your second amendment rights. I actually believe while you will see rational, legitimate gun safety legislation taken up as appropriate in the Virginia General Assembly, my hope would be that some of these communities would watch and see what the General Assembly actually passes and what Gov. Northam might sign before they assume the worst.” 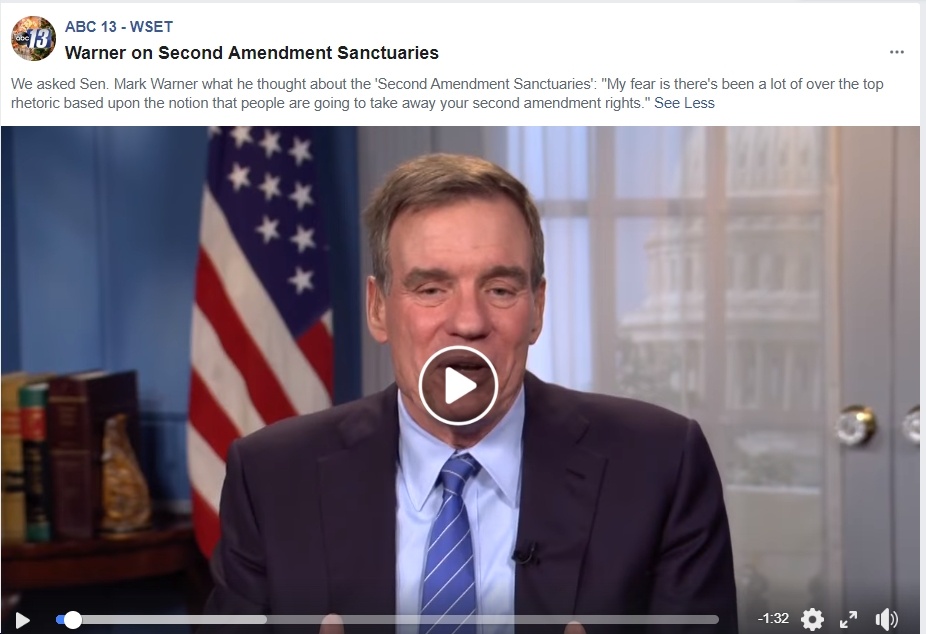 Sen. Tim Kaine, who is “F”-rated by the NRA, says: “Well, every city and county in Virginia is already a constitutional sanctuary, because everyone elected to a city council or board of supervisors, or governor, legislature, senator, we have to pledge to uphold the constitution. So I think what boards of supervisors should do is just remind their citizens, hey, we already pledge to uphold the constitution. I think it’s a little bit of a PR move driven by a couple special interest groups, but of course the reality is…we all take an oath to uphold the constitution. And nothing will pass through the General Assembly dealing with guns that does not meet the constitutional test already…I think people will be watching to see what Virginia does. But there are bills in Congress that I’m a co-sponsor of to ban high-capacity magazines, to promote background checks, to have red-flag laws so that people who are mentally ill and dangerous to themselves or others could be temporarily suspended from having weapons so they don’t do themselves or others harm. These are all bills that are constitutional, they’re completely consistent with the Second Amendment.” 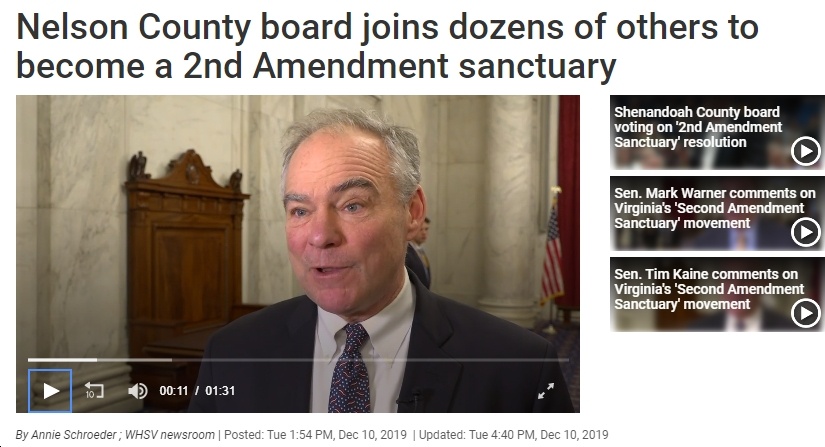 Rep. Elaine Luria (D-VA02): “F” rated by the NRA; she does not appear to have made any public comments on “sanctuary” counties specifically.

Rep. Bobby Scott (D-VA03): “F” rated by the NRA; he does not appear to have made any public comments on “sanctuary” counties specifically.

Rep. Donald McEachin (D-VA04), who has stated that he’s “proud of my ‘F’ rating from the NRA!”, says: “I’m not the governor, but the governor may have to nationalize the National Guard to enforce the law…that’s obviously an option he has.”

Rep. Abigail Spanberger (D-VA07), who received an “F” rating from the NRA, says: “I fully support the Second Amendment…It is a fundamental constitutional right, and I affirm that.” Also note that Spanberger received a 13% rating from the NRA in 2018.  According to this Washington Post article, Spanberger says that it’s “because of her experiences with guns, not despite them, that she favors stricter regulation,” and asks, “What responsible gun owner thinks everyone and anyone should have access to a firearm without a little bit of precaution taken to make sure that those who have a history of violent harm can’t buy a firearm?”

Rep. Don Beyer (D-VA08): “F” rated by the NRA; he does not appear to have made any public comments on “sanctuary” counties specifically.

Rep. Jennifer Wexton (D-VA10): “F” rated by the NRA; she does not appear to have made any public comments on “sanctuary” counties specifically.

“I would hope they either resign in good conscience, because they cannot uphold the law which they are sworn to uphold, or they’re prosecuted for failure to fulfill their oath,” Democratic Virginia Rep. Gerry Connolly told the Washington Examiner of local county police who may refuse to enforce future gun control measures. “The law is the law. If that becomes the law, you don’t have a choice, not if you’re a sworn officer of the law.”

Rep. Rob Wittman (R-VA01): Has an “A+” rating from the NRA, but recently said “he now supports strengthening gun background checks, an apparent shift for the congressman.” He does not appear to have made any public comments on “sanctuary” counties specifically. 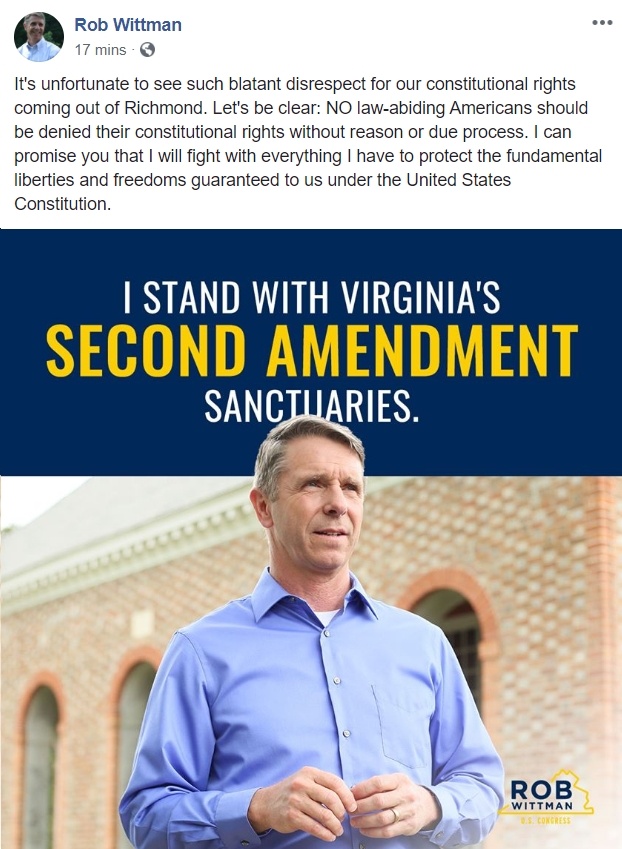 Rep. Denver Riggleman (R-VA05), who wrote that he was “proud to be endorsed by the NRA with an AQ rating,” says: “I stand with all those who are exercising their First Amendment right to free speech on this important issue.” 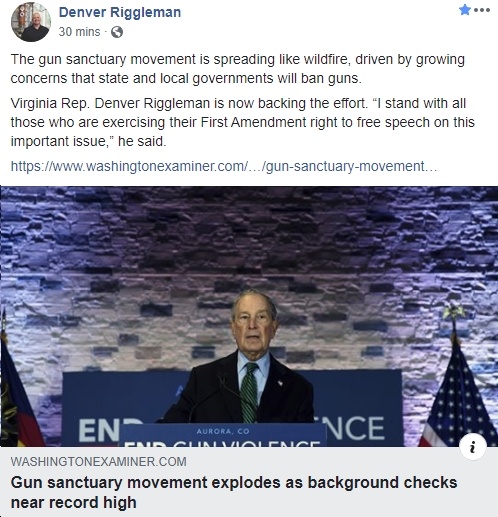 Rep. Ben Cline (R-VA06), who has been rated an “A+” by the NRA, says (through a representative he sent to the Staunton City Council to read a statement by him): “It would be a tragedy if our elected representatives in Richmond were to now seek gun control laws that dismantled the very protections established by their predecessors…Our god-given liberties cannot be taken away by the actions of men, they can only be suppressed. When Virginians speak loudly and with one voice, the incoming General Assembly in Richmond will hear them. By expressing their First Amendment rights to their local city councils and boards of supervisors, Virginians better insure their Second Amendment rights will be protected in Richmond next month. I stand with the people of Virginia’s 6th district and I stand with all those who defend our beloved constitution.”

Rep. Morgan Griffith (R-VA09), who is A-rated by the NRA, says: “The right to keep and bear arms is a foundational freedom of our country…For my part, as a Congressman I will continue to stand up for this God-given right acknowledged in the Second Amendment.” 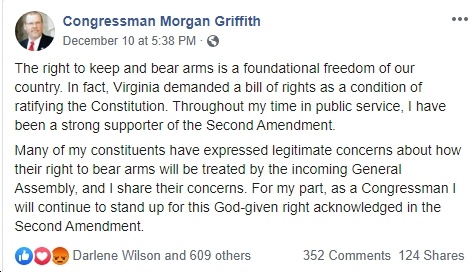 State Senator and incoming Senate Majority Leader Dick Saslaw (D-Fairfax), who is rated “F” by the NRA, says that “the bill he filed won’t be the main assault weapon proposal and will be amended at a later date. Asked about the governor’s support for grandfathering in existing weapons, Saslaw said that would make sense.’ ‘I’m not going to lock up a large part of Virginia,’ Saslaw said.”

Incoming House Speaker Eileen Filler-Corn (D-Fairfax) received a 13% score from the NRA in 2019 and a 54% score from the Virginia Citizens Defense League in 2019. Filler-Corn doesn’t appear to have commented publicly on the “sanctuary” issue specifically, but she has previously supported gun legislation such as universal background checks, assault weapons bans, reinstatement of Virginia’s one-handgun-a-month law, “Extreme Risk Protective Orders,” etc.