For years, as you undoubtedly recall, Virginia Republicans waged a crusade against anything anything connected to the *evil* (in their eyes) “Obamacare” (aka, the Affordable Care Act), including Medicaid expansion, which they (falsely, absurdly) claimed would be a *disaster*.

Which is why it’s interesting to see where Peace ended up – as a new Co-Chair (along with Democratic former State Sen. Rosalyn Dance, who was defeated in a primary last June by Joe Morrissey, but in her case not because of her votes for Medicaid expansion) of the Virginia Consumer Healthcare Alliance (VCHA), which describes itself as “consumer advocacy organization” that’s “committed to leading a rational, constructive dialogue about healthcare across the Commonwealth.” Which sounds good, although note that VCHA has had a conservative bent in the past, such as its advocacy for Medicaid work requirements, as well as its former Chair, Republican Chris Saxman, who wrote Republican nonsense like this (“Republicans in Congress seemed determined to fix/replace/do something with the Affordable Care Act. The question is quickly becoming will it be in time to save it from collapse?”) and this (“the proponents of the ACA will not go quietly into the night, but they too know the status quo is not politically acceptable”). So we’ll see if Peace represents an upgrade over Saxman (now with the pro-corporate “Virginia FREE”), although according to VAPLAN’s 2019 scorecard, Peace was basically an average Republican in the House of Delegates. So…color me skeptical. 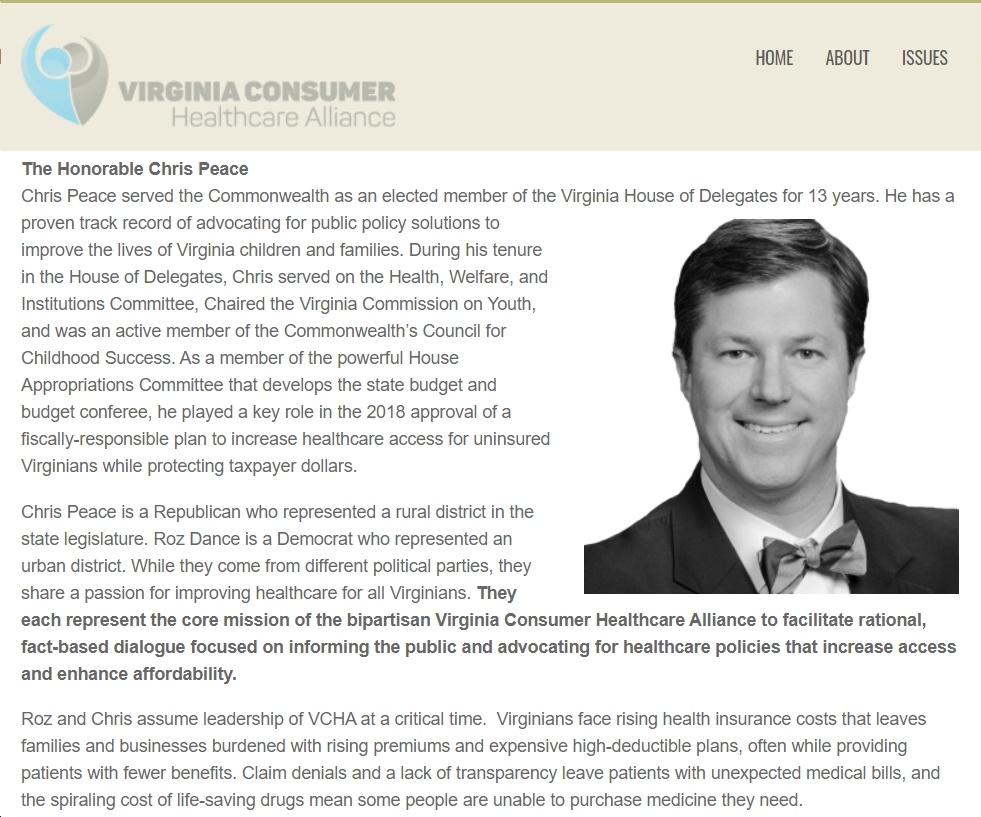