With the Virginia General Assembly’s 2020 session coming down the home stretch – it concludes on March 7 – one major issue whose outcome remains uncertain is redistricting reform. The options, basically, are either a constitutional amendment (SJ306/HB71), along with so-called “enabling legislation”; or Del. Marcia Price (D)’s HB1256, which would “[establish] the Virginia Redistricting Advisory Commission (the Commission), a statutory legislative commission tasked with proposing districts for the United States House of Representatives and for the Senate and the House of Delegates of the General Assembly that adhere to certain constitutional and statutory criteria and that will be submitted for consideration and adoption by the General Assembly.”

The pros and cons of the amendment have been debated for months now. Here at Blue Virginia, we’re not particularly fans. Why not? See Democrats Should Vote NO on the Flawed Redistricting Amendment to Virginia’s Constitution by Luke Levasseur; The Proposed Virginia Redistricting Amendment Is a Bad Deal That Needs To Be Rejected. by Chris Ambrose; and Video: Del. Mark Levine Explains Why He Believes Current Redistricting Amendment “Is Worse Than Current Law.” Also note that House Republicans are pushing hard to pass the amendment – see here, here, here, here, and here, for example – which in and of itself should raise major warning signs. And why does the head of 1VA2021 keep going on Trumpster Radio, where the host and him are in strong agreement on passing the amendment – and where the host calls him a “great friend of mine!” Again…what’s the deal here?!?!?

Thankfully, there’s an alternative – HB1256 by Del. Cia Price – which would accomplish redistricting reform by way of legislation, not a flawed constitutional amendment. So far, Price’s bill has passed the House of Delegates, 54-45, and is now in the Senate Privileges and Elections Committee. See below for video from yesterday, as Del. Price presents her bill, which is ultimately “passed by temporarily” for more discussions. Key points:

So what’s going on here? Seems like most everyone wants to do *something* about gerrymandering, the question being…what exactly. Clearly, the amendment alone was fatally flawed, but is it ok now with “enabling legislation?” Or, is Del. Mark Levine correct that “enabling legislation” can’t “bind” the Virginia Supreme Court? Does this need to be in the constitution at all, or can it be done by legislation? Oh, and why do people refer to this as “non-partisan redistricting reform,” when it is most certainly *not* “non-partisan?” And finally – again – why are Republicans (and Trumpster Radio) pushing so hard for the amendment (which they wrote, by the way)? Think about that one. 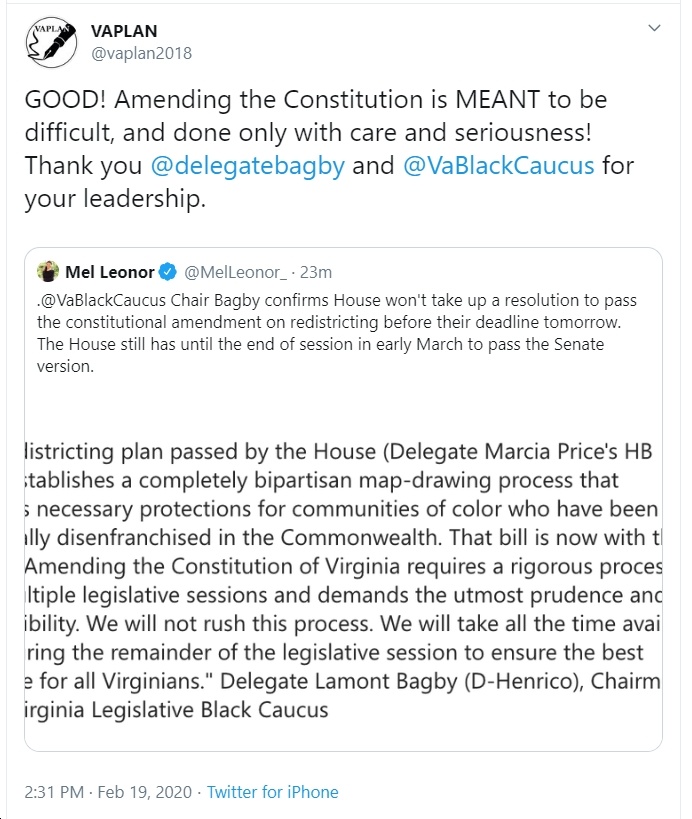