For anyone who denies that white privilege is a real thing, I present to you…the following video of this afternoon’s debate, in the Virginia State Senate, over Sen. Mamie Locke (D)’s bill (SB65) to repeal Virginia’s unnecessary, discriminatory voter photo ID requirements.

As you can see from the video, Republican Senators Mark Obenshain, Jen Kiggans and Bill Stanley all, in their own (not) charming ways, denied and/or minimized the impact/difficulty of mandatory photo ID on the ability of minorities, poor people, elderly people, etc. to vote. As if that wasn’t bad enough, Republican Senators Obenshain, Kiggans and Stanley also wildly overstated the degree of in-person voter fraud. Pathetic.

As both Senators Barbara Favola (D) and Mamie Locke (D) correctly responded, the rates of such fraud are tiny – according to the Brennan Center for Justice, “between 0.0003 percent and 0.0025 percent” (note: both Favola and Locke overstated those infinitesimal numbers by a factor of 1,000). And perhaps most revealingly, check out how angry Sen. Obenshain gets, as Sen. Locke delves into the real reasons behind Republicans passing photo ID laws in the first place. Not only won’t Obenshain admit the discriminatory motivations behind these laws, but he’s deeply, deeply in denial about his own role in doing so – and offended that anyone would dare question is totally pure motives! LOL

With that, here are some strong arguments – by Senators Scott Surovell, Barbara Favola, Adam Ebbin, Dave Marsden and Mamie Locke – for passing this bill, as well as the video of the debate and vote. Nice job by the Democrats in the Senate, particularly bill patron Mamie Locke, and shame on the (white) Republicans, who continue to be willfully oblivious and ignorant of the discriminatory roots of policies like photo ID laws. 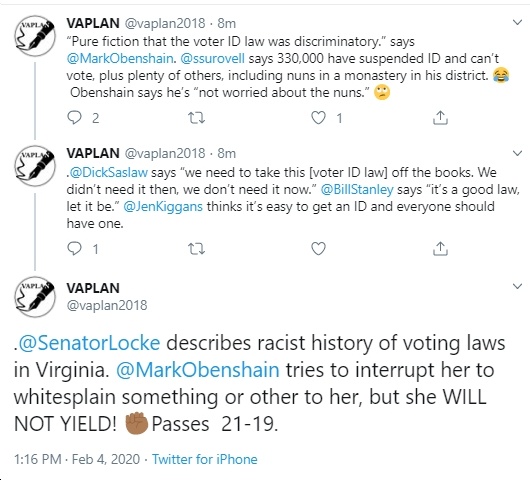 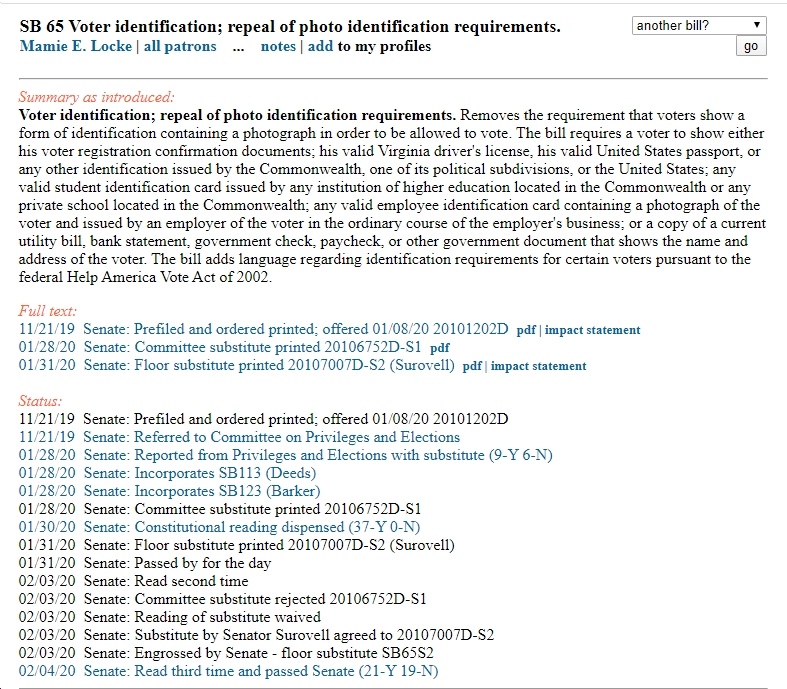