It’s crazy, but also *very* revealing, how partisan the response is to the COVID-19 pandemic. First, check this out – that’s right, “Concern about #COVID19 is now partisan: Democrats fear the #pandemic, Republican think the #coronavirus is no big deal.” And no, as Laurie Garrett (“Former Sr Fellow @CFR_org. Recipient of Pulitzer Prize, Polk (2Xs) and Peabody Awards. Author: IHeard theSirensScream, TheComingPlague, Ebola & BetrayalofTrust.”) points out in her tweet, “This is not science.”

To the contrary, it seems that Republicans are continuing their well-earned reputation for being the science denier and science “skeptic” party, while most Democrats respect and listen to scientific evidence. Of course, there’s also the fact that Republicans much more heavily get their news from a heavily fact-free, science-hostile, right-wing echo chamber.

With that in mind, check out those polling numbers from Civiqs, with Democrats in state after state far more likely than Republicans to say they are “extremely concerned” about the coronavirus outbreak in their state. For Virginia-specific numbers, see below the screenshot of Garrett’s tweet. 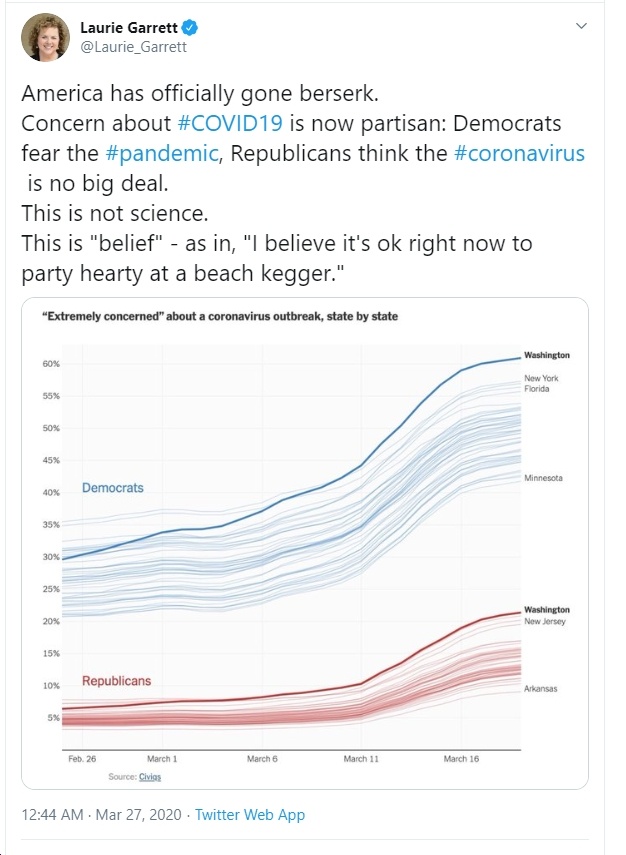 In Virginia, here are the numbers:

Friday Night Update from the ER in Arlington, VA: “I’m optimistic we’re on the downward slide of the curve for now.”