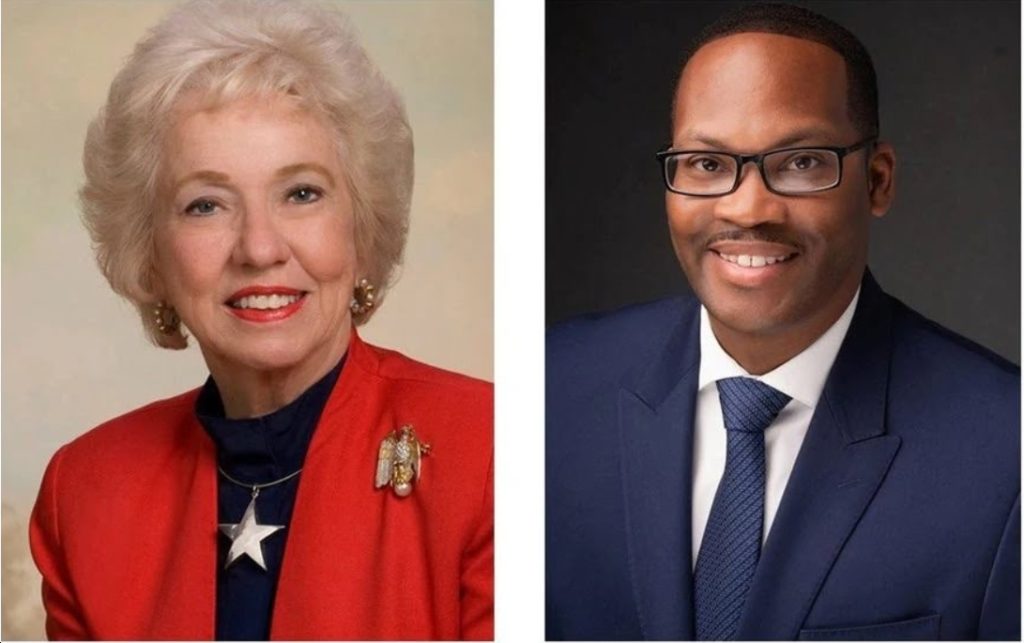 142 mail-in votes were tossed over technicalities in May’s City Council Race between Pat Woodbury (a longtime Republican incumbent) and Cleon Long (endorsed by the Newport News Democrats) in central district Newport News. Long won mail-in ballots by a wide margin, while Woodbury leads by 56 votes overall, suggesting that these uncounted ballots would alter the election outcome in a race separated by such a small margin.

5.3% of absentee ballots in central district were rejected or went uncounted amidst mail delays of 1-2 days in each direction due to COVID-19, and amidst confusion about the witness signature requirement for mail-in voting during the coronavirus, after a successful Virginia ACLU lawsuit in April against this barrier to mail-in voting during COVID-19.

– Since Gov. Northam and other Virginia officials strongly recommended voting by mail during the coronavirus, Cleon Long’s campaign likewise strongly encouraged supporters to vote by mail for safety during COVID-19 in campaign emails, during phonebanking, and on social media. In turn, central district Newport News saw an enormous increase in mail-in absentee voting during the May 19 local elections, with 2,678 absentee ballots cast. These ballots strongly favored Cleon Long. (For comparison, only 293 absentee ballots were cast in all of Newport News in the June 23rd GOP primary.)

– Unfortunately, 5.3% of the 2,678 absentee ballots cast in the central district Council race (or more than 1 in every 20 absentee votes) were REJECTED or went UNCOUNTED over technicalities. Data on voters’ likely party in the VAN voter database suggests that 101 late mail-in ballots and 41 rejected mail-in ballots skew very strongly to Cleon Long, and if counted would likely erase Pat Woodbury’s 56-vote lead.

– 101 mail-in ballots in central district arrived late amidst mail delays of 1-2 days in each direction due to coronavirus. (Mail-in absentee ballots require two trips – to the voter’s home after being requested and then to the voter registrar’s office.) My husband and I ordered our mail-in absentee ballots the night before the state deadline (which was May 12 at 5 pm), and our ballots arrived to our home too late to mail back in time for Election Day.

– 24 of the 41 rejected absentee ballots in central district were mail-in ballots rejected for missing witness signatures, despite a successful ACLU lawsuit in April against the state of Virginia that this is an unfair barrier to voting during COVID-19.

– Unfortunately, the June 29 recount will only consider ballots accepted as valid on Election Day, but the rejected and uncounted mail-in ballots can still be contested after the recount. Cleon Long’s campaign is seeking additional legal counsel to contest these ballots.

– This situation highlights the need for the state to safeguard voting rights for mail-in voters and to eliminate unreasonable barriers to mail-in voting during COVID-19. Many of these central district residents whose mail-in votes didn’t count would have voted for Cleon Long in person on Election Day instead, if they’d known that their mail-in ballots would be tossed over technicalities. Although, of course, this would have undermined the purpose of voting by mail for safety during COVID-19 in the first place.

As these recent Washington Post articles note, the swift move toward mail-in voting during the coronavirus has had the unfortunate and unintended side effect of disenfranchising many voters – with younger, minority, and first-time voters impacted the most (https://www.washingtonpost.com/politics/2020/05/21/heres-problem-with-mail-in-ballots-they-might-not-be-counted/). Mail-in ballots are much more likely to be rejected for technicalities than in-person ballots, with 3-10% of mail-in ballots getting rejected or going uncounted, according to analysis by the Washington Post (https://www.washingtonpost.com/opinions/2020/06/23/absentee-ballots-will-be-critical-this-fall-in-person-voting-is-even-more-essential/?itid=hp_save-opinions-float-right-4-0_opinion-card-e-right%3Ahomepage%2Fstory-ans). Limitations on mail-in voting during COVID-19 have sparked voting rights lawsuits across the country (https://www.nbcnews.com/politics/2020-election/these-vote-mail-lawsuits-could-help-decide-presidential-election-n1217791; https://www.politico.com/news/magazine/2020/04/07/danger-moving-vote-by-mail-168602).

Data from the Voter Activation Network (VAN) on voters’ likely party affiliation was 100% accurate in predicting how many provisional ballots Cleon would win compared to Woodbury. (VAN is a nationwide voter database used by many campaigns that tracks a number of measures including likely party affiliation.) While phonebanking, Cleon Long’s campaign found that voters identified in the VAN voter database as Strong Democrat (SD), Lean Democrat (LD), and No Data (ND) all tended to support Cleon, while other categories of voters such as Strong Republican (SR) and Lean Republican (LR) tended to support Woodbury instead. (NOTE: No Data (ND) voters are those who normally don’t vote in primaries or local elections, so VAN has limited data on their likely party affiliation, but during the campaign we noticed that this group of “new” or “occasional” voters strongly favored Cleon Long.) To test this theory, Long ran the names of the provisional ballot voters through VAN to find their likely party affiliation, and then added together (SD + LD + ND) voters and divided by the total number of voters to predict how strongly the provisionals would skew toward him. This model predicted that Cleon would win 29 out of the 39 provisional ballots, or 74.4% of the provisional vote. As the Daily Press reported, Cleon indeed won exactly 29 out of the 39 provisional ballots.

Since this model worked so well in predicting the provisional votes, Long applied it to the VAN’s likely party data for the mail-in ballots rejected for missing witness signatures and for the mail-in voters who requested ballots May 11 and May 12 (right before the state deadline) but who didn’t mail the ballots back in time amidst mail delays due to coronavirus (since this group likely makes up many of the 101 late ballots). He ran the names of the 134 voters who requested mail-in ballots on May 11 and 12, but whose ballots were never received. Likely party data in VAN suggests that 82% of those votes skew toward Long. We suspect that this group makes up the majority of the 101 late mail-in absentee ballots, potentially netting Long up to 63 votes according to the VAN data – in a race separated by only 56 votes.

Similarly, when the names of the 24 voters whose mail-in ballots were rejected for lack of witness signature are run through VAN to check likely party affiliation, the data suggests that 70.8% of those ballots skew toward Long, which would net his campaign an additional 17 votes. Unfortunately, the June 29 recount will not include these votes because only ballots deemed valid on Election Day will be considered, but Long is seeking additional legal counsel to contest these ballots after the recount.

Long’s campaign would be happy to show the data used for these calculations with reporters. He has access to the official May 19 election poll book and the absentee ballot request list through the orders for the June 29 recount.

MORE INFO ON THE UNCOUNTED AND REJECTED MAIL-IN BALLOTS

101 mail-in absentee ballots arrived after Election Day at 7 pm, amidst mail delays due to coronavirus. Local Newport News post offices told me that local mail deliveries are delayed 1-2 days in each direction due to COVID-19. When the mail-in ballots that my husband and I requested in central district arrived too late to send back through the mail, we called the local registrar and learned that we could either turn in our ballots at City Hall or bring them to our polling place on Election Day. However, most voters who received their ballots too late to mail back wouldn’t have known this important information. Adding to the confusion, the mail-in ballots were still dated May 5 (the original election date before Northam postponed the election two weeks due to the coronavirus). Seeing the May 5 date on the ballot for the May 19 election, many voters were likely unsure when exactly they needed to mail their ballot back by. The mail-in ballots that arrived after Election Day at 7 pm were placed in a sealed envelope, and the voters did not receive any notice that their votes were not counted.

41 mail-in absentee ballots in the Newport News central district race were rejected during the count on Election Night for technicalities such as the voter forgetting to sign, forgetting to write in their address, or forgetting to get a witness signature. In-person voters’ ballots were not rejected for any of these reasons since a poll worker is there in person to confirm the voter’s address and signature and to alert the voter at the time if there is a technical issue to correct on their ballot. In contrast, voters whose mail-in ballots were rejected only learned of this when they received a letter in the mail from the registrar’s office AFTER the election. Shouldn’t Virginia registrars be contacting mail-in voters BEFORE the election if there is an issue to correct on their ballots, instead of sending these voters a letter that their ballots were rejected only AFTER the election has already passed?

In summary, data suggests that the majority of central district ballots were votes for Cleon Long, but those who cast ballots by mail had a 5.3% chance of having their vote tossed over technicalities, unlike those who voted in person. In the wake of the coronavirus pandemic, Virginia Attorney General Mark Herring stated, “No Virginian should ever have to put their own health and safety at risk to exercise their right to vote.” Yet, for more than 1 out of every 20 mail-in voters in central district in May’s Newport News City Council race, voting by mail led to their vote not being counted.

About Cleon Long and Pat Woodbury

Councilwoman Pat Woodbury is a multi-term incumbent who is the only Newport News Council member to oppose removal of a Confederate monument in Denbigh (https://www.dailypress.com/government/local/dp-nw-confederate-monument-newport-news-20200611-z2dkpp7phjfoxjqznxumytjubm-story.html, https://www.facebook.com/1767079473519916/posts/2866723433555509/). She also voted AGAINST a Council resolution in support of the Equal Rights Amendment in 2019, and she has consistently voted for level funding for Newport News Public Schools, despite pleas from the local NAACP to better fund Newport News students, 77% of whom qualify for free or reduced lunch (https://www.facebook.com/jenkinsforcitycouncil/posts/2191258707851346, https://www.dailypress.com/news/newport-news/dp-nws-newport-news-budget-presentation-20190324-story.html, https://schoolquality.virginia.gov/download-data).

Cleon Long, a mechanical engineer who served on the Newport News Planning Commission and the board of the local Boys & Girls Club, would be the first African-American elected to City Council in central district Newport News. Cleon was endorsed by the Newport News Education Association.

Newport News central district resident Joe Patoux voted by mail and disregarded the witness signature requirement due to COVID-19 because he read news coverage that witness signatures would not be required during the coronavirus because of the risk to those living alone. He was upset to receive a letter from the Registrar’s Office after the election informing him that his mail-in absentee ballot was not counted. Joe Patoux: 757-876-0738 (he requested that callers leave a voicemail message and he will call back).