But assaulting a police officer is a very serious offense, right?

Take for example this 19-year old boy who was standing outside an apartment building, drunk and “smelling like marijuana.” When the officer told him to put his hands on his head, he “elbowed one officer in the throat, bear-hugged another officer, and hit a third officer in the side.” None of the officers was injured seriously. He was charged with three counts of assault on a police officer. That’s three felonies, with a mandatory one-and-a-half-year sentence in addition to whatever sentence he was given for other charges. Now, I’m not advocating for people to punch an officer when they’re being arrested, I’m just not sure that this merits three felony assault charges. We have laws for actual injuries to law enforcement officers; additionally, we have a law for resisting arrest, which he was also charged with.

Assault seems to quite often be tacked on to a charge of resisting arrest. Here’s another example—another man who “smelled like marijuana,” who wrestled on the ground with the police officer while resisting arrest. NO ONE WAS INJURED. Here’s a man who was drunk and disorderly inside a pharmacy and law enforcement came to arrest him. He kicked the two officers in the shins, resulting in no injuries. That’s two charges of assaulting a police officer, with a mandatory minimum sentence of a year. Here’s a woman charged with assault for kicking a police officer too. And this man in Newport News, who after being stopped for driving without headlights pushed a law enforcement officer in the chest before running away, and was charged with assault on an officer as well as resisting arrest. You might think it’s terrible that so many people resist arrest and “assault” the arresting officer. But given the behavior of officers we’ve happened to capture on cell phone videos the past few years, and given how the officers’ stories often don’t even match the footage we see before our eyes, you have to wonder what might have really happened during some of these incidents.

So what precisely constitutes assault? Does it require injury? What is included—punching someone, scratching someone, slapping someone, pushing someone, where’s the line? Oddly enough, the line isn’t written into the law, it’s just kind of loosely defined by case law. In other words, if a judge says it was assault that one time years ago, then it’s part of the definition of assault. Sometimes it doesn’t even require any physical contact whatsoever.

In Arlington this February, officers charged a juvenile girl with assault and battery after she spit on one of them during arrest for petit larceny from the Pentagon City mall. Six month mandatory sentence (if convicted) for spitting on a police officer. Same for this man, who spit on the officer who was arresting him at a hotel in Crystal City, where he was drunk in public.

Finally, here’s a man who was pulled over in Charlottesville for speeding, and pointed his index finger at the officer and said “pow.” Doesn’t sound like assault to you, pointing a loaded finger at someone? According to the officer’s testimony, “he believed [the man] had a weapon and was going to shoot him until [the man] said, “Pow.”  At that point, [the officer] realized “it was only his finger.” The Appeals Court ruled that “the applicable definition of assault does not require that an assailant have the actual ability to inflict bodily harm.” That’s right, without laying a hand—or finger—on the officer, the driver was guilty of a felony, a scarlet letter forever on his record.

Since resisting arrest is only a misdemeanor, it’s easy to see why charges of assault against a law enforcement officer might be tacked on. This kind of overcharging helps prosecutors convince those arrested to accept a plea bargain. When faced with multiple felony charges with a potential mandatory minimum sentence of at least six months, most people will plead guilty to the misdemeanor charges (i.e. resisting arrest, disorderly conduct, drunk in public) in exchange for the felony assault charge being dropped. This is why 95% of cases in Virginia end with a guilty plea rather than going to trial. But it’s certainly not justice.

In general, Virginia needs to move away from mandatory minimum sentences, which take the discretion away from the jury or the judge. This would be a good one to do away with, if not to altogether eliminate the special treatment of law enforcement officers in assault cases 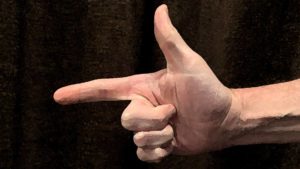