See below for video of Del. Don Scott (D-HD80) defending State Sen. Louise Lucas (D-SD18), who is also the first-ever female and first-ever African-American President Pro Tempore of the Virginia State Senate. Del. Scott is apparently responding to this story, about the Confederate monument being pulled down in Portsmouth Wednesday night:

Before nightfall — and the protest that resulted in the injury — Sen. Louise Lucas arrived on the scene where she set ground rules for protesters. The scene was captured on camera and posted to Facebook.

“This [monument property] is city — anybody who pays taxes has the right to be on the property.” That comment, from Lucas, was captured on video and is now under review by Virginia Beach attorney Tim Anderson.

In the video, the senator’s daughter, Lisa Lucas- Burke, a member of the City Council, then pleads with protesters to give elected officials a chance to bring some calm to the situation in their emergency later that evening. Lucas is reportedly heard offering some choice words about the process.

Anderson posted the video to his social media page.

“Her mother [Sen. Lucas] in the background said ‘The hell with City Council; it’s your right to go on the property,’” said Anderson.

Anderson also alleges that Lucas instructed police to stand down.

“She further told the police, according to an officer I spoke with last night, that the people were going to spray paint and vandalize the statue and they were not to arrest them,” said Anderson.

Anderson accuses Lucas of inciting a riot, which he says is a felony in Virginia.

Apparently in response to this story, Del. Scott says the following:

“Not this time…the opponents of reform, the opponents of progress, have always sought to minimize the voices of African-American leadership…They tried to lock up…[Portsmouth] Mayor [Kenny] Wright…Councilman Mark Whitaker..Sheriff Moore…and now they’re trying to lock up…Senator Louise Lucas, President Pro Tem of the Virginia State Senate. Not this time. We’re not going to go for it. We know that the progress that we need in criminal justice reform and economic equity is a very important tool, and Sen. Lucas is at the forefront of that, and we need her on this time. For those who are trying to prevent our rise, it will not work, not this time. You should be more upset about the killing of George Floyd, as Senator Lucas was, than you are about the falling of the monument. Not this time.”

Sen. Lucas responded to Del. Scott’s video a little while ago, writing:

“The struggle for justice and against injustice is still before us. I join you in introducing meaningful criminal justice reform laws in Virginia.“

By the way, the Portsmouth Commonwealth’s Attorney is Stephanie Morales, who the Virginian-Pilot described as “part of a new generation of reform-minded prosecutors” who ran “on a platform that focused more on helping people in the community than convicting people in the courtroom” and who “has championed many of the hallmark issues that generally define a progressive prosecutor.” Back in October 2017, Sen. Lucas wrote that Morales “is a liar who tried to use her office to help Sheriff Bill Watson go after his political opponent.” A few months earlier, Lucas had withdrawn her support for Morales, saying: “I don’t like the way things are being run in that office…I’m not trying to do anybody any harm. I’m just disassociating myself.”

Definitely a story to keep our eyes on. 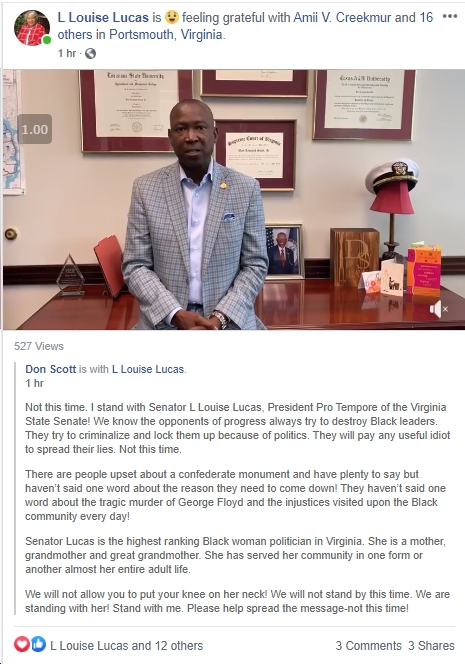