There’s an interesting comment over at the conservative Bacon’s Rebellion, where they are busy bemoaning Bob Good’s win over Denver Riggleman last night in VA05. But first, let me pick a nit: namely, the concept – including in Peter Galuszka’s Bacon’s Rebellion article, “Libertarians Need Not Apply” – that Denver Riggleman was defeated in part because he has “Libertarian” leanings. In fact, according to Project Vote Smart, Riggleman is nothing of the sort, with ratings of:

Also note that Riggleman voted *against* the Equality Act, “which would have banned discrimination based on sexual orientation and gender identity.” And “he voted against a resolution opposing President Donald Trump’s ban on transgender service members.” So..nope, Riggleman hasn’t been particularly pro-LGBT in his voting record, despite what lots of people seem to believe.

The bottom line is that Riggleman is a standard-issue right-wing Republican in almost every area. Yes, he presided at a same-sex marriage of two friends, and that apparently pissed off social conservatives like Bob Good. But other than that, it’s very hard to find much to quibble with from a hard-right perspective, including Riggleman’s 94.5% voting record with Trump, which by the way is FAR greater than one would predict based on his district’s political leanings.

With that “quibble” – ok, it’s more than a quibble – out of the way, on to the comment by “CREGUY” (see screenshot, below) which is in response to Galuszka’s article. The main point, which I think is an excellent one, is that if Virginia Republicans hold a convention for governor in 2021, “you may as well give the Governor’s Mansion to D’s for another 4 years as Amanda Chase will win the GOP nod,” and someone like Pete Snyder – who is certainly *NOT* a moderate, but isn’t as far right as Chase – would probably not run against her, as a “VA GOP statewide convention at this point would be so far to the right that even Falwell will look like a moderate.”

It’s hard to argue with that, especially given the results the last time the Virginia GOP held a statewide nominating convention for governor. That was back in 2013, and they ended up nominating the “extreme team” of Ken Cuccinelli, EW Jackson and Mark Obenshain – all of whom lost statewide (to Terry McAuliffe, Ralph Northam and Mark Herring). Of course, one could also point to the VA05 convention in 2018, which narrowly selected none other than Denver Riggleman as its nominee over super-far-right Cynthia Dunbar. So does that prove a relative “moderate” can win a Virginia GOP convention? Meh. First off, again, Riggleman’s only “moderate” relative to extremists, such as the Cynthia Dunbars and Bob Goods of the world. Second, Riggleman barely eked out a win at that strange, fractious, deeply divided VA05 convention.

Could a non-far-right Republican win the nomination at a statewide convention for governor in 2021? It’s very, very hard to imagine, which means…yep, advantage Amanda Chase. Unless, of course, Republicans opt for a primary, in which case it’s still possible Chase might win the nomination, but where the much larger – and presumably less hardcore rightwing – electorate might entice someone like Snyder to give it a go. Of course, that could also fracture the party, with Chase potentially running as an independent, all but guaranteeing that Democrats win the governorship again in 2021. So basically, Republicans are in a very tough position heading into 2021. Of course, assuming Joe Biden’s in the White House, it’s highly likely that Republicans will be energized next year, and that Democrats will ease off of the intensity they’ve shown since Trump was elected. Even with all that, though, it’s hard to see Amanda Chase ever being elected governor of Virginia. But it’s absolutely *not* hard to see Republicans nominating Chase, even if it means that they extend their statewide losing streak to 12 years…and counting. 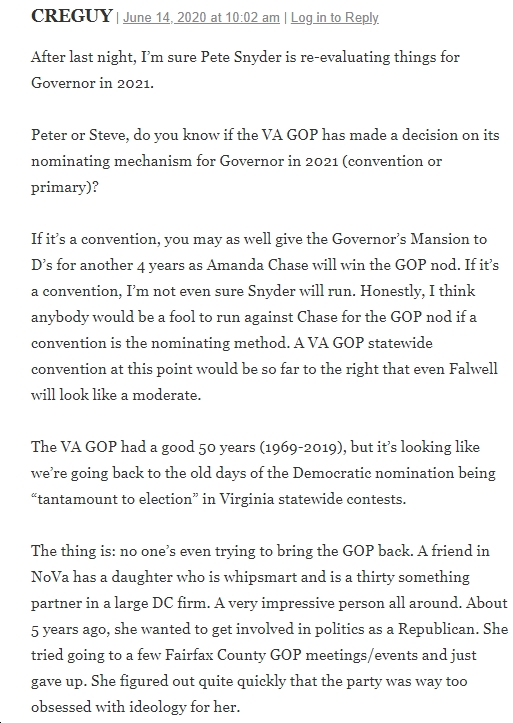