From the Commonwealth Institute for Fiscal Analysis, which turns consistently excellent material…like this.

Criminal Justice Reform in the Commonwealth: 1.6 Million People in Virginia with a Criminal Record Deserve A Fair Chance To Succeed

In the wake of a national conversation about racism, policing, and criminal justice reform, the time has come for changes to a system that has disproportionately targeted and incarcerated communities of color. This summer’s special session will be the next opportunity for Virginia’s lawmakers to advance necessary reforms, including new “fair chance” policies that remove counterproductive barriers — including in areas of employment, housing, and education — and allow people with criminal records to build a more secure economic future.

A Flawed, Racially Biased System
Decades of “tough on crime” policies and mass incarceration have left more than 70 million people — or nearly one in three adults — in the United States with an arrest or conviction record. As a consequence, nearly half of all children in the country have at least one parent with a criminal record, making it easier for poverty to linger for multiple generations.But these trends have not been equally experienced, including in our commonwealth. A variety of factors — including discriminatory laws, practices (e.g., “broken windows” policing), and implicit biases — mean that race is a major factor at every stage of the justice system, such that Black Americans experience more frequent stops, searches, and arrests by police, while also facing higher rates of pre-trial detention, and ultimately harsher sentences than similarly situated white people. In fact, Black Virginians comprise about 19% of the population, but they accounted for more than 40% of all arrests in 2019. More than half — 55% — of all people in Virginia’s prisons are Black. These data points encapsulate a problem that is national in scope: in 2018, for every 100,000 adults in the United States, 555 people were imprisoned. But for every 100,000 Black adults, that number surged to more than 1,500 people.For the nearly 13,000 people who are released from prison in Virginia each year, and even for those who have been convicted of a minor offense, the stigma of a criminal record is difficult to wash away, including in the employment context. This is in part because employer background checks have become a standard practice. When these checks turn up a record, the applicant — if they are hired at all — can expect lower earnings: men who were formerly incarcerated can expect to work nine fewer weeks per year and earn 40% less annually, for a total loss of $179,000 even before the age of 50.

These collateral consequences, however, are most pronounced for people of color. A landmark study found that among job applicants with a criminal record, the likelihood of a favorable response (e.g., an interview or job offer from the employer) for white candidates dropped by half, from 34% to 17%, but it fell by almost two-thirds, from 14% to 5%, for Black candidates. In fact, evidence suggests that white applicants with a criminal record are more likely to receive an interview from an employer than Black applicants without one. And among women who were formerly incarcerated, one analysis found that the odds of a favorable response from an employer were 93% greater for white women than for Black women. Overall, these findings underscore how job-seekers with a past criminal record are often punished twice: once for the record itself and again for the color of their skin.

The barriers to employment that people with records face undermine our economy and public safety. According to one estimate, the stigmatization of people with felony records reduces the annual U.S. gross domestic product by an estimated $78 to $87 billion. This is despite growing evidence that people with records make good employees, an important consideration for businesses and even the U.S. military. In fact, research on individuals with a felony record serving in the military found that they were promoted more quickly and to higher ranks than other enlistees and were no more likely than service members without records to be discharged for negative reasons. At the same time, access to employment and higher wages has been shown to reduce recidivism and makes our communities safer. 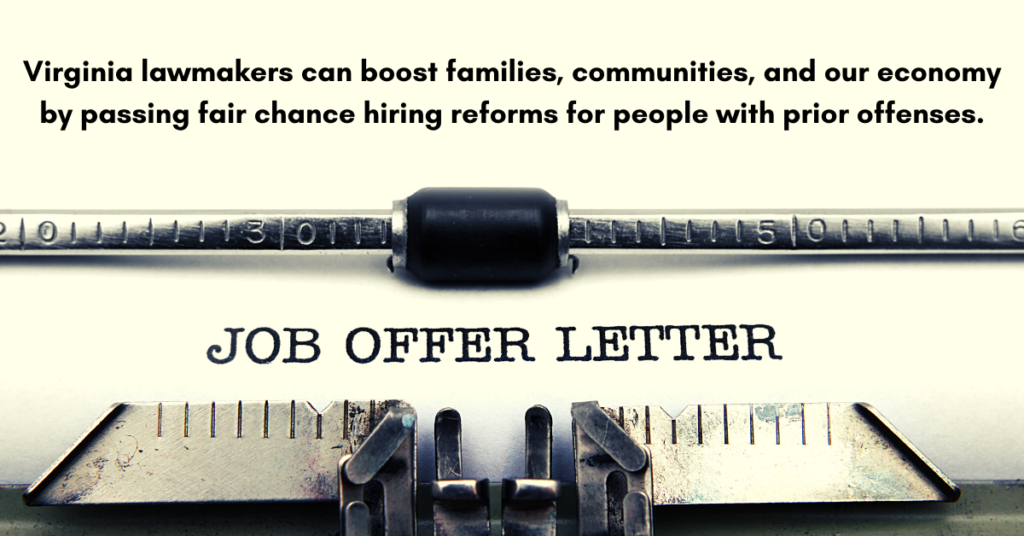 As the General Assembly considers a menu of options to reform our criminal justice system, policies that create pathways to good-paying jobs for people with records can bolster families, communities, and our economy. These fair chance reforms, which build on existing laws in Virginia and best practices from other states, include:

The Time for Reform Has Come
The work to reform our criminal justice system and unravel collateral consequences that keep too many people in Virginia in poverty is vital, urgent, and will require a sustained effort. The General Assembly can begin that work this summer.

Learn more about The Commonwealth Institute at www.thecommonwealthinstitute.org