Campaign finance reports for local candidates for July 1-August 31 are now available from VPAP. Here are some highlights from the two biggest races – for Mayor of Richmond and Mayor of Virginia Beach.

Mayor Stoney is in the lead, but not by a huge margin over his closest competitors, Kim Gray and Alexsis Rodgers. To win this race, a candidate has to win the most votes in 5 out of 9 Richmond city council districts. Note that there’s no “ranked choice voting” in this race, so it’s simply a matter of winning more votes than any of the other candidates…doesn’t have to be a majority. Also of interest; the Rodgers campaign issued a press release saying, “The September 15 campaign finance report shows that Richmond mayoral candidate Alexsis Rodgers has the greatest grassroots support with three times the number of donations of $100 or less compared to top political opponents Mayor Levar Stoney and Councilmember Kimberly Gray. Additionally, Rodgers has not accepted any donations from corporations, staying true to running a people-powered campaign.”

This massive lead by Democrat Jody Wagner in the money race is great to see, as it’s definitely time for a new mayor of Virginia Beach, and Wagner will do a great job! 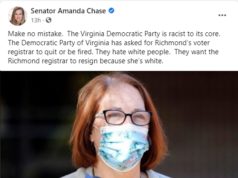