Back on August 31, we wrote about a massive, $250,000 donation from a group called “Action Now Initiative LLC” to “OneVirginia 2021,” which is heavily pushing the fatally flawed redistricting amendment on the ballot this fall. As we wrote at the time, “Action Now Initiative LLC” – according to Ballotpedia – is “a 501(c)(4) organization based in Houston, Texas,” founded by hedge fund billionaires John and Laura Arnold. Ballotpedia adds that John Arnold “began the firm in 2002, after his former employer, Enron, went bankrupt,” then “retired in 2012 at the age of 38” after having “founded Action Now Initiative in 2011.” The big question is, why would the Arnolds support the Virginia redistricting amendment, as it is currently constituted – as opposed to what it *might* have been? Do they not understand how screwed-up the amendment is at this point? Did the OneVirginia 2021 folks bamboozle…er, convince them that this amendment constitutes real reform, which it clearly doesn’t (for the reasons listed here)? Other options?

Anyway, with indications that support for the amendment may have fallen sharply, and with the Virginia NAACP announcing its strong opposition to the amendment, the Texas hedge fund billionaires have now coughed up another cool $250k to what’s disingenuously called “FairMapsVirginia.” 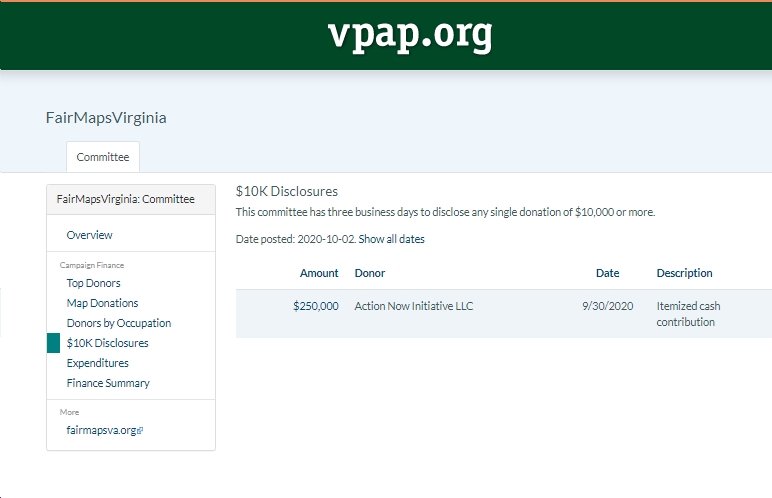 That brings the total from the Texas hedge fund billionaires to $503k, with another $1 million+ from Kathryn Murdoch’s “Unite America.” What’s fascinating is how so much huge money is coming in from out of state to support this thing. What do they see in it that so many people who actually live in Virginia don’t?