The deceptively named “Fair Maps” people have taken their vicious and dishonest campaign to a new level.  These folks have been waging a nasty and knowingly dishonest campaign for months now, in an effort to characterize the strong Democratic support for independent redistricting as somehow support for gerrymandering. That, of course, is flat-out false.

What “Fair Maps” has been doing, with all its out-of-state dark money, has been campaigning, relentlessly, to brand longtime redistricting reform advocates as gerrymanderers while pushing an amendment sponsored and backed by the architects of every Democratic and Republican gerrymander of the past generation.

The recent email (see screen shot, below), sent out under the name of “Fair Maps” Executive Director Brian Cannon, took the negativity and dishonesty into the realm of nasty and false personal attacks.  After Del. Kathleen Murphy sent an email to her constituents advising them to vote NO on Amendment 1 because “the General Assembly can and will do better” to reform the redistricting process, Cannon falsely called her a gerrymanderer.

It is downright Orwellian doublespeak how Cannon took Del. Murphy’s call for reform and turn it on its head.  After all, when the gerrymanderers rammed Amendment 1 through the General Assembly, they accomplished the following:

If anyone needed any more evidence that this amendment is NOT a principled move towards nonpartisan redistricting, but nothing more than a sham by politicians who want to continue picking their voters rather than the other way around, look at the comments of Amendment 1 supporter Sen. Janet Howell.  Howell recently voted to provide the legislative-controlled commission the incumbent legislators’ home addresses, so that they can be sure they don’t accidently draw the legislators (whose job it is to protect) out of their districts.

Sen. Howell articulated her view that legislators are entitled to their seats:

“The argument for including incumbents’ residences was the belief that we actually are not equal to everybody else,” Howell said. “We have been elected in the past. And that should give us special status.”

While Brian Cannon went after Del. Murphy, it is interesting that he did not reply to the recent opinion pieces by long-time reform advocates, Del. Paul Krizek and Del. Vivian Watts. Nor has Cannon replied to the many other detailed critiques of his flawed amendment. Why not? Simple; because Cannon cannot rebut the facts that are carefully laid out within them, and he certainly doesn’t want to amplify those facts.

Instead, Cannon picks a quick and short email sent by Del. Murphy so that he can distort it and engage in character assassination, because only by redefining the reformers as gerrymanderers, and the gerrymanderers as reformers – what next? up is down? hot is cold? – can he hide the fact that the amendment is a gerrymander’s dream.

The question many people ask is why does OneVirginia2021, now masquerading as “Fair Maps,” support this amendment if they oppose gerrymandering?  The answer is not difficult to understand.

Amendment 1 stands for every aspect of legislative control over the redistricting process that OneVirginia2021 had fought against for years. But in 2019, the gerrymanderers in both the Republican and Democratic caucuses joined together and outmaneuvered Cannon, by ramming this mess through, after slipping it in front of the General Assembly 45 minutes before a vote.

Faced with the reality that reform had been effectively killed by the General Assembly’s passage of this amendment, Cannon had a decision to make: would he be honest with his supporters and admit failure and shut down the lobbying group, or would he continue to support the now-fatally-weakened amendment?

From a personal point of view, Cannon’s decision to go for option #2 is quite reasonable. He faced a choice: give up on a $100,000 salary and look for another job from a position of failure, or keep the salary for a couple more years and then sell a victory as “real reform” that he can put on his resume for his next venture. It’s clear which choice Cannon made here, but that doesn’t mean the rest of us have to do so as well.

The fact is, we are in this situation because of politicians who want to continue picking their voters rather than the other way around, and the institutional inertia of groups like OneVirginia2021.  If you support the core values of OneVirginia2021 – a real end to partisan gerrymandering – you should follow their founding board member Linda Perriello and Vote NO on Amendment 1. 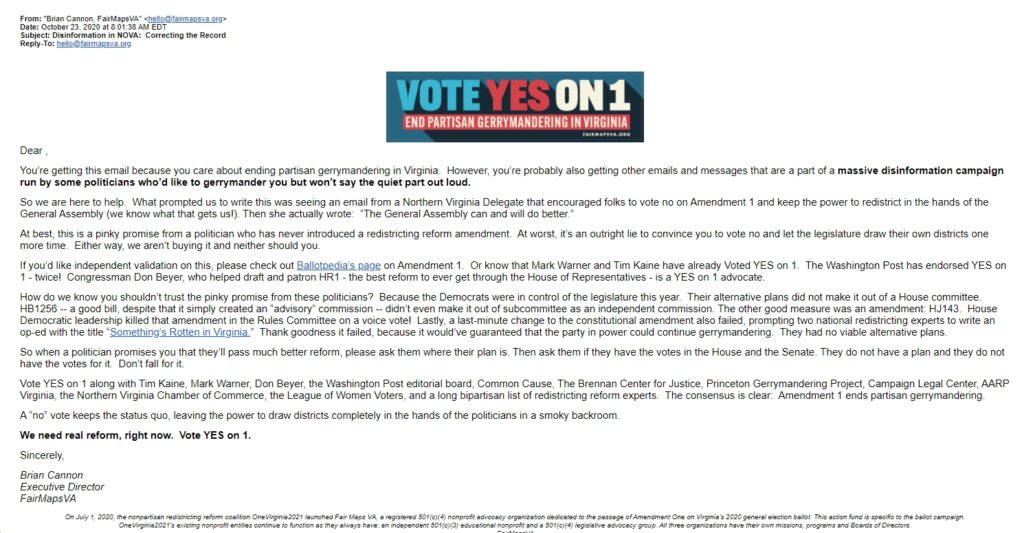 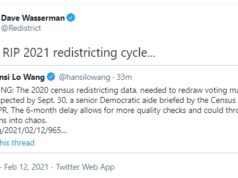