Emulating its leader in the White House, the Virginia House GOP went on a string of crazy-uncle tweets last night, demonstrating its utter lack of understanding of the Constitution. What crazy, socialist, Left Coast radical idea prompted this unhinged rant, you might ask?

The House of Delegates passed a bill, that allows a judge to determine the sentence after a jury has found a person guilty, repealing a law dating back to 1796, and bringing our code in line with such liberal states as Mississippi, Alabama, Florida, and well, every other state except Kentucky.

This is tremendously important for our criminal justice system, because juries notoriously give sentences outside the normal judicial sentencing range, sometimes decades longer. The 2019 report on jury sentencing from the VCSC shows that while judges concur with the guidelines in 90% of all bench trials, juries only sentence in that range 50% of the time, 37% of the time giving a higher sentence. On average, sentences that exceed the recommendation are 40 months longer.

Knowing this, prosecutors use the threat of a jury sentence (think of it as spinning the roulette wheel to decide how much of your life you lose), to coerce defendants into avoiding a trial altogether by accepting a plea deal. With that kind of bargaining power, you can believe those plea deals won’t be generous.

As a result, 90% of all felony cases are resolved by guilty pleas, 9% by bench trials, and only 1.3% of all cases result in a jury of one’s peers. So while the Sixth Amendment guarantees the right to a jury trial, most people are scared to exercise that right. Even innocent people sometimes.

The GOP somehow thought it was smart to spin this as “a victim will now have to ask her rapist for permission to have a jury sentencing.” Which just demonstrates their complete lack of understanding of the criminal justice system and the Constitution. There are two sides in a criminal trial—the accused and the government (that’s why it’s always “Commonwealth v. Joe Smith”). The prosecutor is a publicly-elected official whose client is the public, not the victim; and the victim doesn’t have a constitutional right to a trial, or a right to a jury. The US Constitution only guarantees the accused those rights. (And if the victim did have that right, having 90% of cases end in pleas definitely would be abridging it.)

So, not only is the House GOP completely out of touch with how the criminal justice system works and what’s in the Constitution, they’re out of touch with 48 other states. Or perhaps the truth is just that they’ll use fearmongering nonsense and lies to try to undermine any progress made in Virginia under the helm of the Democratic majority? 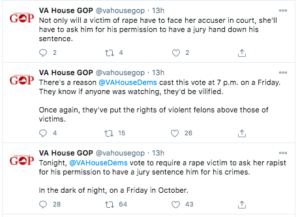 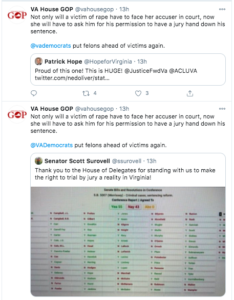 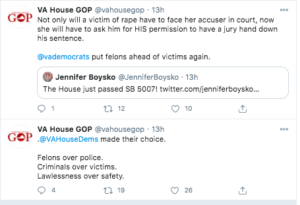 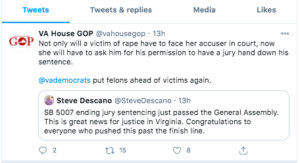