Yesterday, the Virginia General Assembly wrapped up its business for the 2021 Special Session. But before it did, Senate Minority Leader Tommy Norment (R) had a few things he apparently wanted to get off his chest. You can watch the video, below, and I’ll provide a few…uh…”highlights” (?) from his “soliquy” (sic; obviously the word is “soliloquy,” but Norment definitely has a history of mangling words – remember sh-PUTS-va?), as Norment called it. Anyway, there’s a lot of obnoxious or even offensive stuff in Norment’s blather. As Cindy of VAPLAN put it yesterday: 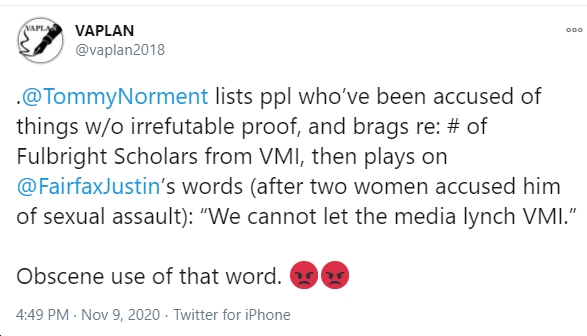 With that, here’s the video, followed by a few comments. Oh, and also keep in mind as you’re watching the video, that Norment is this same guy:

The VA GOP is pretty much a hybrid of the old "John Birch Society" and the "White Citizens' Councils" https://bluevirginia.us/2021/10/qasim-rashid-attempts-to-have-a-conversation-with-a-republican-pushing-a-petition-to-ban-critical-race-theory-in-public-schools-concludes-you-really-have-no-idea-what-crt-is-and-youre-just-u#comment-5582518264 h/t @BenLitchfieldVA

Great, but now let's keep on voting blue TODAY, TOMORROW, and EVERY DAY WE CAN through 11/2! https://bluevirginia.us/2021/10/big-early-voting-in-deep-blue-northern-virginia-saturday-very-clear-that-democrats-are-voting-big-right-now-and-republicans-not-keeping-up#comment-5582492391 @samshirazim