Over on social media, far-right Virginia State Senator Bill DeSteph (R) is busy claiming that he “has prevailed in his efforts to compel the General Assembly’s Democrat [sic] majority leadership to provide office space for in-person, public access to legislators.” DeSteph further claims that “[t]his is a huge victory for the First Amendment and for open access to government for all Virginians.” DeSteph’s argument is that the “decision to close the Pocahontas Building was a clear violation of the First Amendment and communicated an eagerness by Senator Locke, Speaker Filler-Corn, and the Northam Administration to shut out public input in the legislative process.”

The big question, of course, is whether ANY of this is true. Sadly, given DeSteph’s track record over the years – see He’s Just a Genie in a Bottle…Virginia State Sen. Bill DeSteph (R) Wore Costume with “Rub Me” Lamp “Protruding from Crotch”, “Bad on all sorts of levels” – GOP Sen. Bill DeSteph sparks backlash over another conflict of interest , Virginia State Sen. Bill “Rub Me Lamp” DeSteph (R) Shared Video by Anti-Muslim Activist on His Official Facebook Page, Bill DeSteph: “Muslems Build Mosques to Represent Islamic Supremacy Over Their Enemy”, etc. – it’s hard to give him the benefit of the doubt. And in this case, that’s the case yet again. For starters, check out the following (click to enlarge) from Susan Clarke Schaar, Clerk of the Senate, emailed yesterday:

Following the hearing in Federal court yesterday it was determined that to ensure the health and safety of the constituents of Virginia, essential legislative staff and members the Pocahontas Building and the Capitol will remain closed for the 202[1] session.  T[h]e buildings will only be open to current members and credentialed legislative staff.

The Clerk of the House and I will explore possibilities of space in close proximity to the Pocahontas Building or the Science Museum that would afford meeting space for members to meet with their constituents.  A reservation system will be set to reserve rooms.  A member may reserve a room for one hour.  No more than ten people may be in the meeting with the  member and EVERYONE must wear a mask or face shield.  Failure to follow these guidelines will result in loss of the meeting space privilege.

Hmmm…does that sound like what DeSteph was saying? Nope, didn’t think so. Also, see below for one-page ruling by the U.S. District Court for the Eastern District of Virginia, which says:

In short, Clerks agreed to find space for State Senators to meet with groups smaller than 10 at the Science Museum and/or near the Pocahontas Building, as long as everyone wears masks. Sen. DeSteph wanted the Pocahontas Building opened; the judge said NO. Finally, as you can see below in the “Amended Joint Stipulation of Facts”:

So…yeah, DeSteph claimed that he achieved “a huge victory for the First Amendment and for open access to government for all Virginians.” Except…nope, he definitely did NOT do any of that, given that “the Court hereby DENIES Plaintiff’s Motion.” But whatever, details details…LOL.

UPDATE Saturday 1 pm – I’m informed that DeSteph’s lawsuit was “tossed,” but also that the order I posted – which was sent to me by an attorney – isn’t the one that shows that what DeSteph’s saying is NOT what the court order says. If and when I receive the actual order that denies DeSteph’s request to reopen the Pocahontas Building, I’ll post it here. 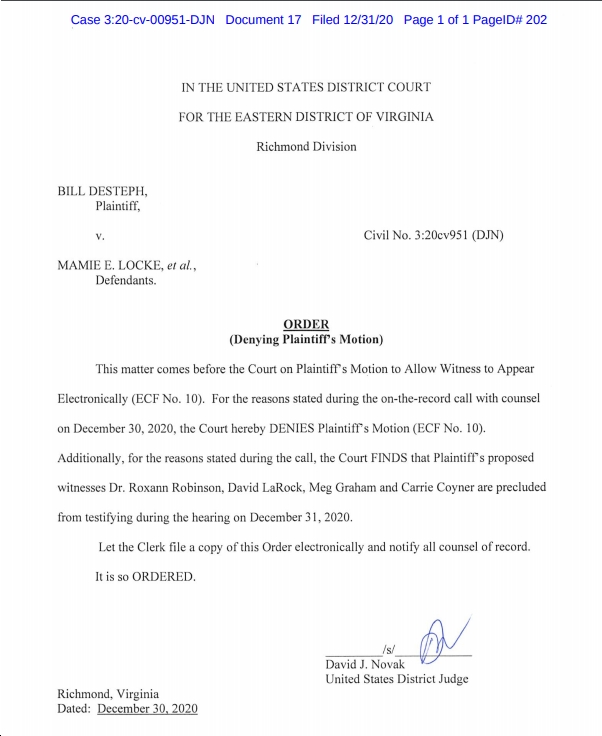 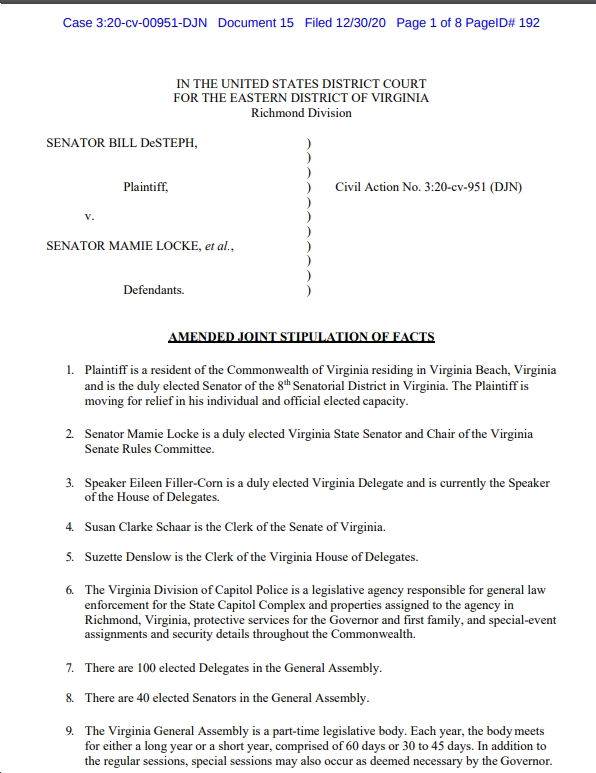 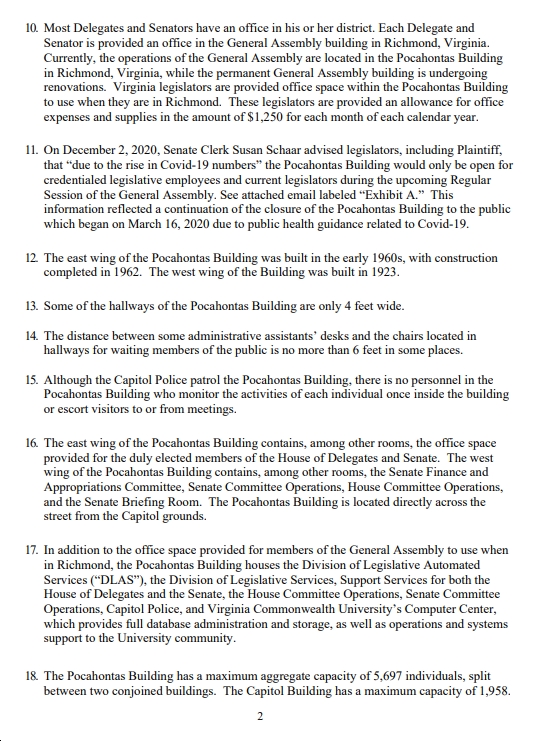 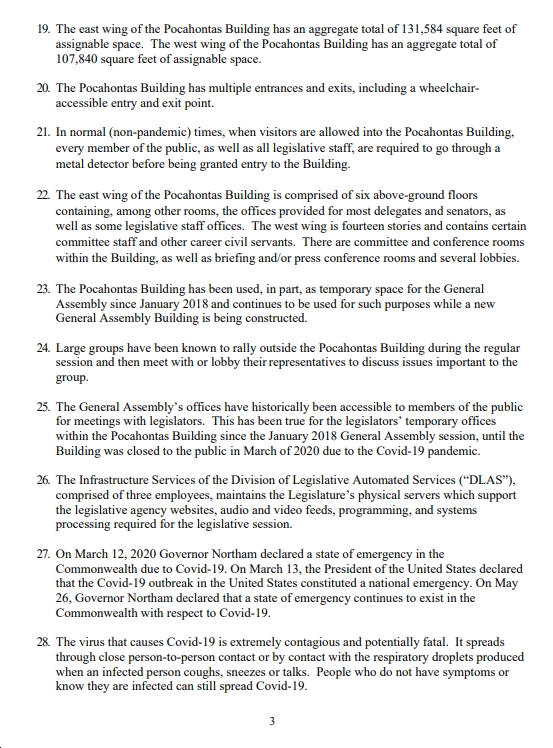 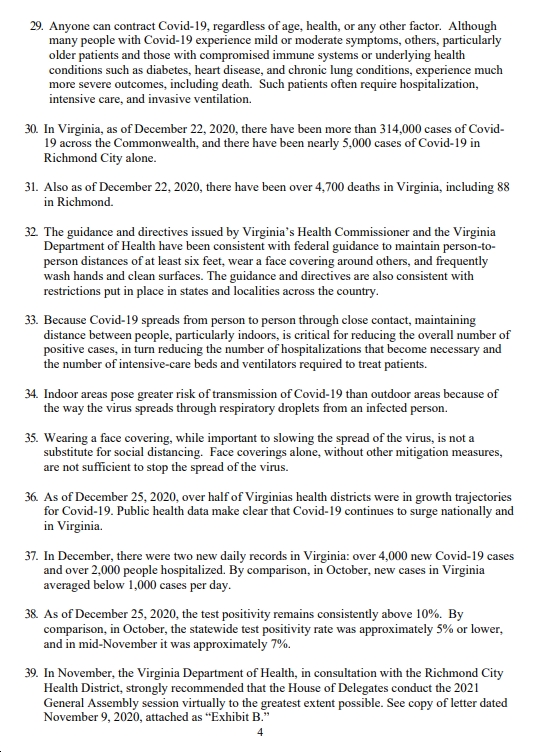 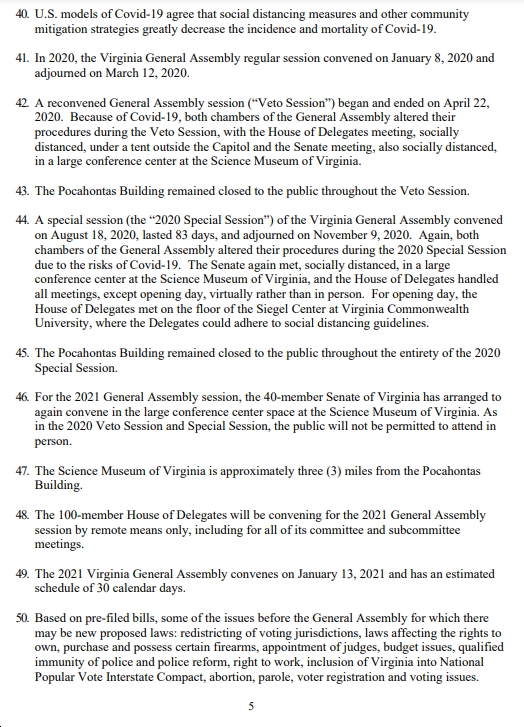 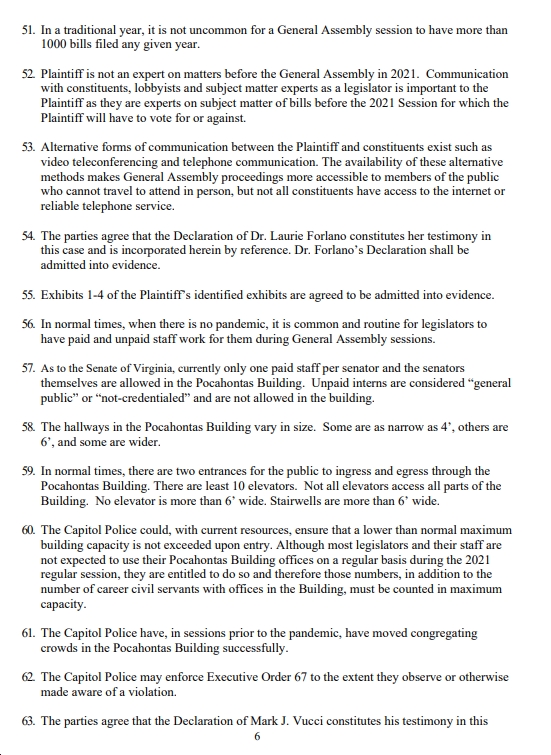 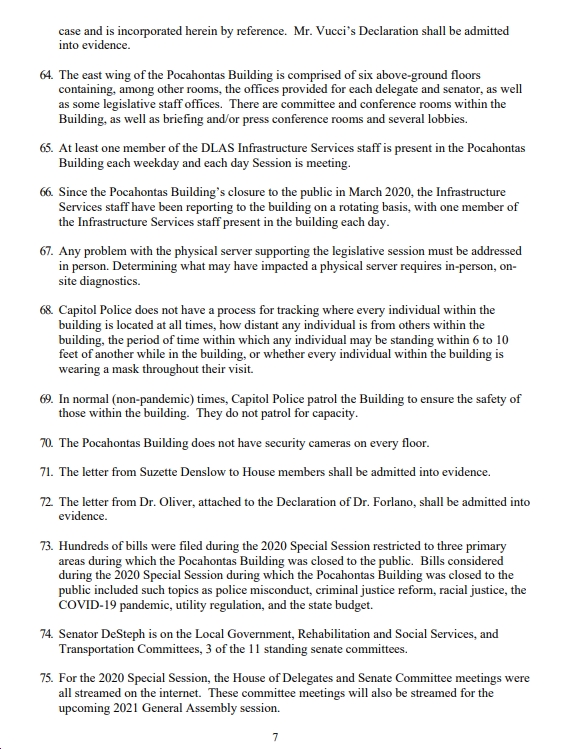 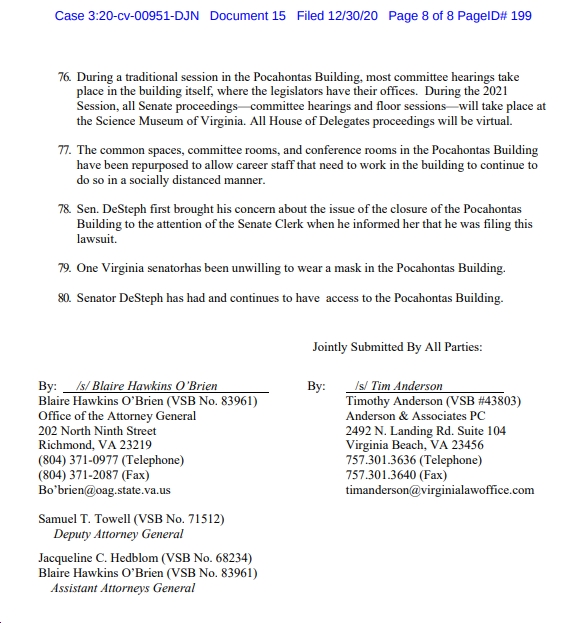