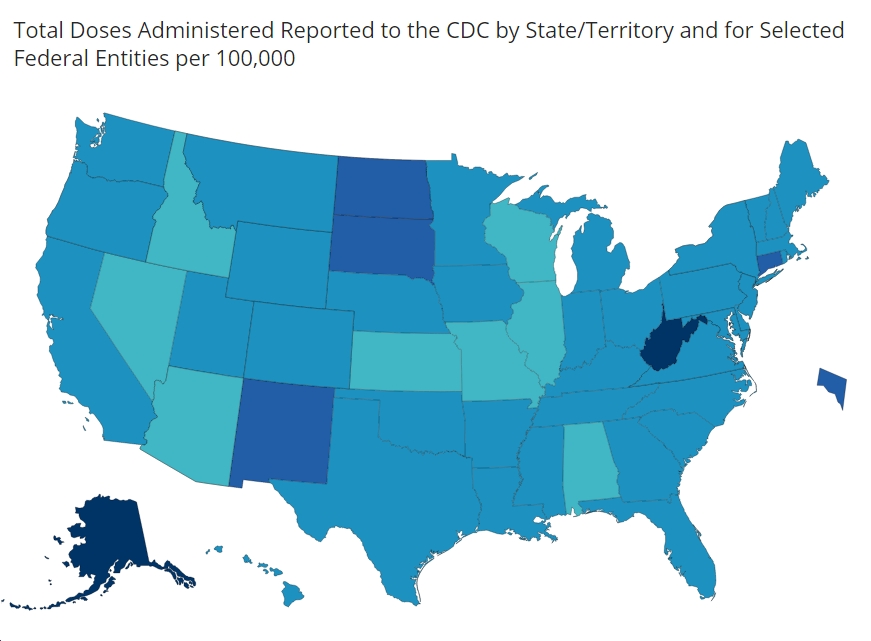 There’s been a lot of criticism lately of Virginia’s COVID-19 vaccination progress, with complaints focused on the rate of vaccines actually being injected into people’s arms. For instance, this letter from the Northern Virginia Regional Commission argued that Northern Virginia jurisdictions could easily handle 65,000-70,000 doses per week, and asserted that a “the problem is a sufficient, predictable, and equitable supply of vaccine.”

What’s hard to separate out in all of this is how much of the problem stems from a shortage of vaccine supply coming into the states, how much is related to issues within specific states and/or regions, and who – if anyone – is specifically to “blame.” Arguing in bad faith as they almost always do, Republicans – many of whom minimized the pandemic for nearly a year, while resisting and/or complaining about almost every measure (masks, social distancing, stay-at-home orders, etc.) that Gov. Northam attempted to employ in an effort to rein in the pandemic – suddenly now claim to be *deeply* concerned about getting the pandemic under control, and shockingly are pointing fingers at…yep, *Democrats*. Obviously, that’s not to be taken seriously, but still, it’s annoying to listen to their disingenuous crocodile tears.

So, how is Virginia actually doing these days? I chatted with Gov. Northam’s Chief of Staff, Clark Mercer, a bit earlier this evening, and he pointed me to the CDC’s latest vaccinations data, which Mercer notes “is for today and is the most accurate.” What does this data say? Mercer emphasizes the following points:

That actually doesn’t sound too bad at all…and it’s almost certain to continue getting better in coming days and weeks.

As for the “delta” between shots distributed and administered, a statistic that many of us have been focused on, Mercer points to two big challenges states are facing:

1) “There are ‘second’ shots the CDC sends that are accounted for to give people their second dosage, so it shows up in states’ counts, but won’t be used until that second shot appointment happens”

2) “The federal pharmacy partnership with CVS and Walgreens- they are federally contracted nationally to do long-term care and assisted living facilities. States don’t control this program, and the companies keep vaccine on hand for clinics taking place in the next couple of weeks- often around 100k.”

The bottom line, according to Gov. Northam’s Chief of Staff, is that Virginia’s actually doing pretty well regarding COVID-19 vaccinations. Even better, now that we’ve got competent national leadership in place, as opposed to the Trump disaster, the situation is likely to continue improving in coming days, weeks and months. So…yes, help is on the way, both nationally and at the state/local level, and hopefully by spring/summer, we’ll be well on our way back to “normal,” or at least the “new normal.”  In sum, there’s finally light at the end of the tunnel, and even better, it’s NOT the headlights of an oncoming train. 😉