If you’re following the Virginia GOP’s 2021 gubernatorial contest, you can’t possibly have missed their emphasis on the supposed need to enhance “election integrity” (along with frequent references to “culture war” stuff like Dr. Seuss, Mr. Potato Head, trans kids playing sports, etc.) Of course, as former Rep. Denver Riggleman (R-VA05) has pointed out repeatedly in recent months, the entire premise of this Republican effort if fatally flawed:

Also see here, as Riggleman “likens Trump vote-fraud crusade to the search for Bigfoot.”  And check out the Virginia Department of Election’s report on the 2020 election, which found basically zero evidence of any problems, and to the contrary concluded that it was highly successful almost any way you look at it.

And yet, despite a complete lack of evidence, Virginia Republicans like Glenn Youngkin, Pete Snyder, Kirk Cox, Amanda Chase, etc. keep pounding on this theme, convinced that “STOP THE STEAL language wrapped in ‘election integrity'” – as former Rep. Riggleman accurately describes it – is a winning issue with the Virginia GOP “base.” For instance, see below for a tweet by Glenn Youngkin’s campaign about what he calls “many Virginians who are concerned about Virginia’s election process,” which he says is why “I launched my Election Integrity Task Force.”

Of course, literally the only reason “many Virginians” are “concerned about Virginia’s election process” is because right wingers like Youngkin, Cox, Chase, Snyder, etc. keep spewing out falsehoods about that election process. But instead of apologizing for doing that and, of course, NOT DOING IT ANYMORE, instead these Republicans double down on what former Rep. Riggleman calls “language [that] was cultivated by Mike Flynn/[Roger] Stone/Q.” Sadly, it’s hard to disagree with former Rep. Riggleman when he argues that this is “a winning message” for Republican candidates. Even more disturbingly, it’s also a way to “disenfranchise through conspiracy.” So that’s where we’re at right now, with one party (the GOP) almost completely unmoored from reality and increasingly at odds with democracy itself, while the other party (the Democratic Party) is rooted in reality and fighting to DEFEND our democracy. For Virginia voters this November, the choice won’t be any starker or more crucial…

P.S. You’ve also gotta love where Riggleman says “damn right” to a comment about “having election integrity in the [Republican] Party ranks first.” 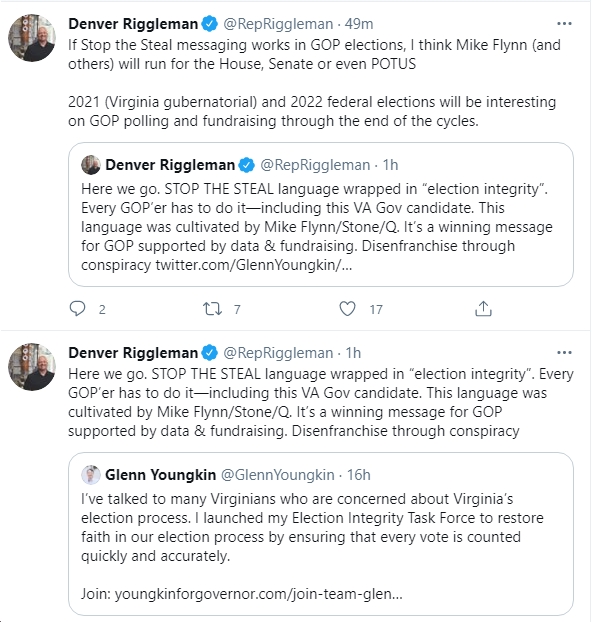 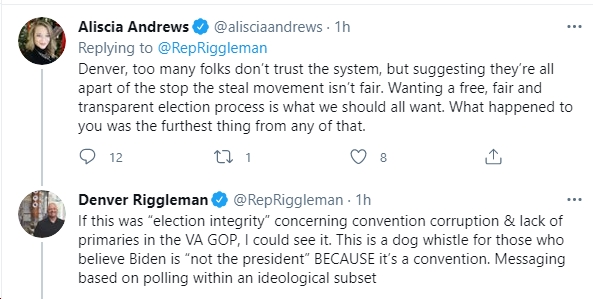 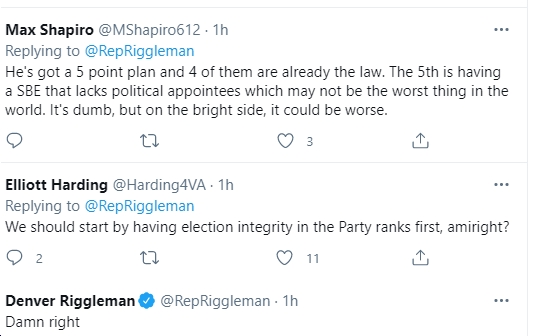