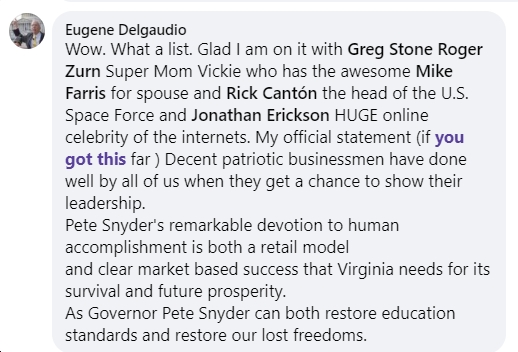 Pete Snyder touting endorsements by a bunch of right wingers, including our old pal, former Loudoun County Board of Supervisors member Eugene Delgaudio (before he was defeated, thank goodness, in November 2015 by Democrat Koran Saines). Yes, this guy.

Responding today to news that the Southern Poverty Law Center will be subpoenaed for its file on Loudoun Supervisor Eugene Delgaudio (R-Sterling), an SPLC spokeswoman said her organization fully intends to stand by its classification of Delgaudio’s ultra-conservative advocacy organization as an anti-gay hate group.

The SPLC official, Heidi Beirich, would not comment directly on the specifics of the subpoena, but she repeated claims that Delgaudio has consistently attacked and demeaned gays, lesbians and immigrants through the nonprofit group he manages and founded, Public Advocate of the United States.

The SPLC is an internationally recognized civil rights nonprofit group based in Montgomery, Ala.

For more on Delgaudio, see below:

So why would Pete Snyder tout an endorsement from this guy? First off, clearly Snyder is willing to go as far right as he has to in order to win the VA GOP gubernatorial nomination this time around.  Recall that in 2013, Snyder lost to the even-further-right E.W. Jackson, and clearly Snyder doesn’t intend to let that happen again. Second, given Snyder’s recent anti-LGBTQ comments (see below), perhaps he’s not really on a different page than Delgaudio? Anyway, let’s all just make sure that if Snyder’s the VA GOP’s gubernatorial nominee, that we all turn out in droves in November to vote for whoever the Democratic nominee ends up being.

“…these ridiculous policies that the left is pushing at us, to try to have transgender bathrooms in our schools.  You know, I missed my daughter’s lacrosse practice today; first time ever. Well guess what, there is no way I’m going to come home to her three years from now and have to see her crying because she got cut from the team or isn’t even starting, because someone who two weeks ago used to be a dude. I’m sorry, not happening on my watch.”

Any further questions as to why these two birds of a feather might flock together?

P.S. Thanks to reporter Brandon Jarvis for the “heads up” on this one…

FWIW: 5 Ways the Internet Changed Our Politics [For the Worse] in 2021, Including a “Meta Problem” and “Commonwealth Blues”