As we’ve previously pointed out, Rep. Denver Riggleman (R-VA05) was one of the most conservative members of Congress, so you certainly can’t accuse him of being a closet liberal or whatever. But he’s also reality-based enough to know that the Republican Party of Virginia is a bad, pathetic joke. For more on that, check out this new WaPo story about the VA GOP’s “byzantine internal nomination process that has bred confusion and suspicion among the party faithful.” After reading that story, former Rep. Riggleman weighed in (see his tweet here and below) that it’s “SOP [Standard Operating Procedure] for the VA GOP” on their upcoming, May 8 nominating convention, the point of which – as Riggleman explains – “is to disenfranchise as many people as possible and tilt it toward the candidate of choice for that committee.” Utterly pathetic party with horrible, extremist candidates and a corrupt nominating process. Sounds very Trumpian, eh? Gross.

P.S. Also, below Riggleman’s tweet, check out a few highlights and top-rated comments to that WaPo story. Enjoy…and, of course, make sure you vote Democratic up and down the ballot this November! 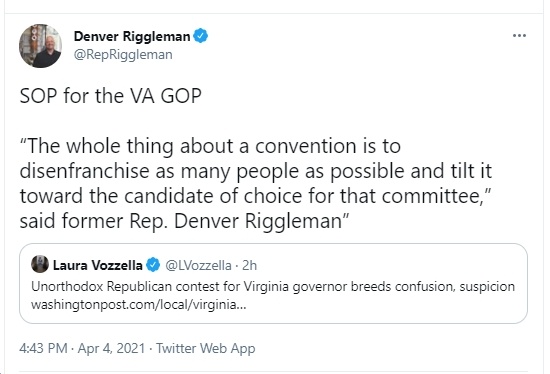