What on earth is going on here? As explained by Chanda McGuffin:

Residents who spoke at last week’s BOS meeting, this is what transpired after the crowd spoke in favor of body and dash cam at the Augusta County Board of Supervisors Meeting. Chairman Garber and Supervisor Pam Carter has a comedy exchange after Tracy Pyles left out.

The statement is derogatory and seems as though they want to call him a racial slur by calling him a monkey for agreeing with the predominately Black speakers on needing body and dash cam.

Garber calls him a monkey and Carter says “not my monkey, not my circus!” We need to call on media to get a hold of this story. This is how they talk about their constituents.

For the record, the exchange between Supervisors went like this:

Chairman Gerald Garber: “Can we dress Tracy up as a monkey and send him down the street? “

Supervisor Pam Carter: “Not my monkey not my circus”

I wish I could say I am surprised but I’m not. Until y’all organize, vote, run for office, support candidates, this is who you’ll get representing you.

Local elections have typically, on average, a voter turnout of 10%.

By the way, if you Google Tracy Pyles you get this:

An Augusta County supervisor complaining about news coverage referred to an African-American reporter as “boy,” a usage many people consider racially charged.

Four other supervisors at the meeting either said they didn’t hear Pyles or wouldn’t comment. However, Pyles admitted to referring to Trice as “boy” and called it an “error.” 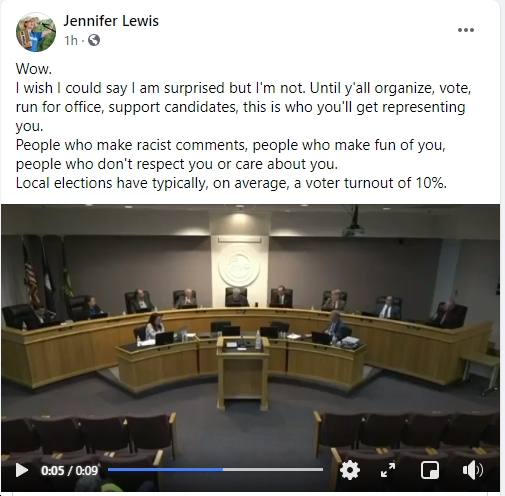 Anti-“CRT” Petition in Stafford County Reminds Us: “Because fanaticism and ignorance is forever busy, and needs feeding…”

This crap should be an automatic disqualifier for Youngkin. It's up to all of us to make sure it is! https://bluevirginia.us/2021/10/video-youngkin-airs-ad-featuring-woman-who-wanted-to-ban-nobel-laureate-toni-morrison-pulitzer-prize-winning-novel-beloved-from-virginia-schools#comment-5584518334

Virginia’s DEQ Should Reject the Mountain Valley Pipeline’s 401 Permit Under...