The Virginia Bar Association has been an esteemed tradition in Virginia politics for decades, with candidates for governor appearing before the lawyers, journalists, etc. to answer questions about their policy positions, etc. It should go without saying that if you’re seeking to be elected by the people of Virginia to the highest office in the Commonwealth, you absolutely should NOT be skipping out on this debate – and, in fact, no gubernatorial candidate has done that in 36 years…until now, with Trump Republican Glenn Youngkin, who clearly is terrified to answer questions about who he is, what he believes, where he stands on the issues, etc.

So with that in mind, check out the following “NotDebate” Twitter thread by Cindy Cunningham, along with some responses by yours truly. And note that, as entertaining as this might be, it absolutely does not make up for the fact that Youngkin, inexcusably, refused to participate, even citing the absurd/lame excuse that the moderator, Judy Woodruff, once donated to Haitian earthquake relief as “part of a joint fundraising effort called the Clinton Bush Haiti Fund.” Seriously, don’t ask… 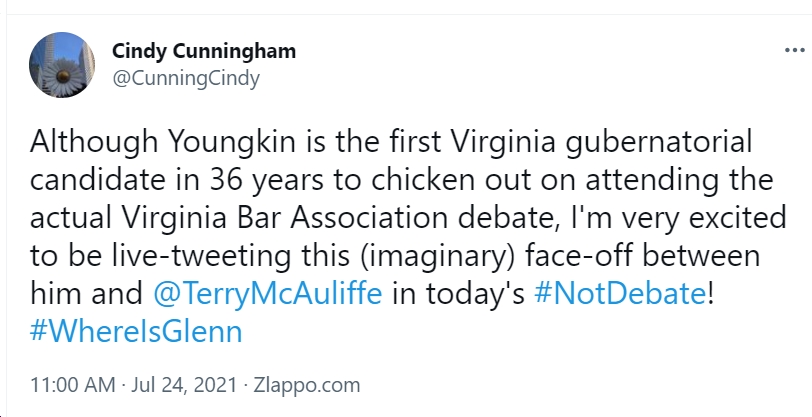 (And no question, if Youngkin DID have the balls to debate, it would be highly entertaining to watch @TerryMcAuliffe rip the crap out of him. Youngkin knows this, obviously, which is why he’s terrified to debate.) 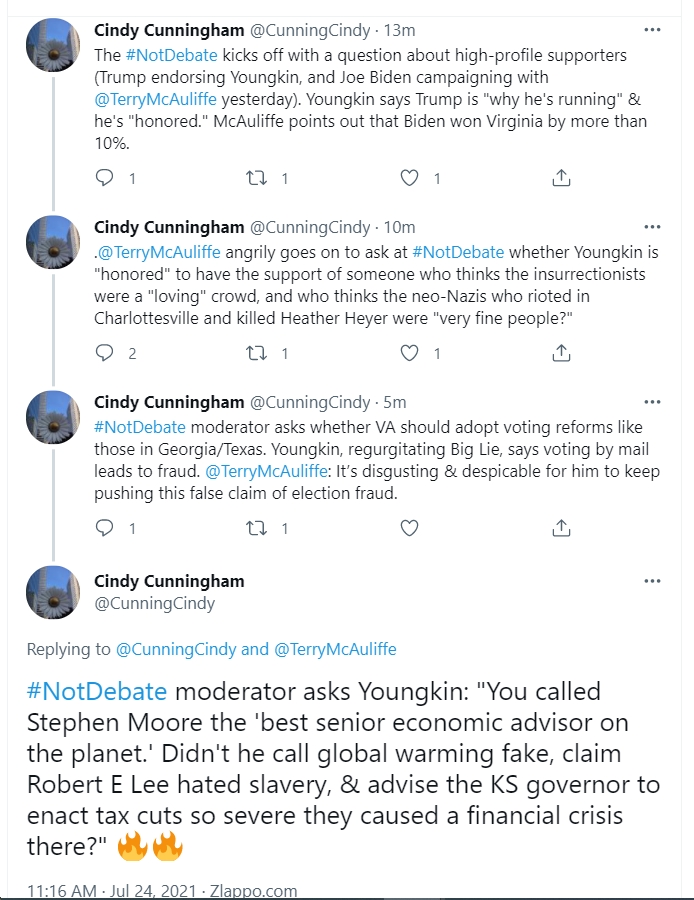 (*This* is Youngkin’s problem – if he reiterates that he’s “honored” to be endorsed by Trump, it hurts him among the majority of VA voters, but if he backs away from Trump, it kills him among Trump cultists. Of course, Youngkin could just do the morally right thing, but noooo…

BTW, a good followup at a debate, if cowardly Youngkin ever participates in one, would be whether Youngkin supports the sham “audit” that Amanda Chase is pushing of Virginia’s 2020 election – one of the most secure, best-run elections in Virginia history, btw.) 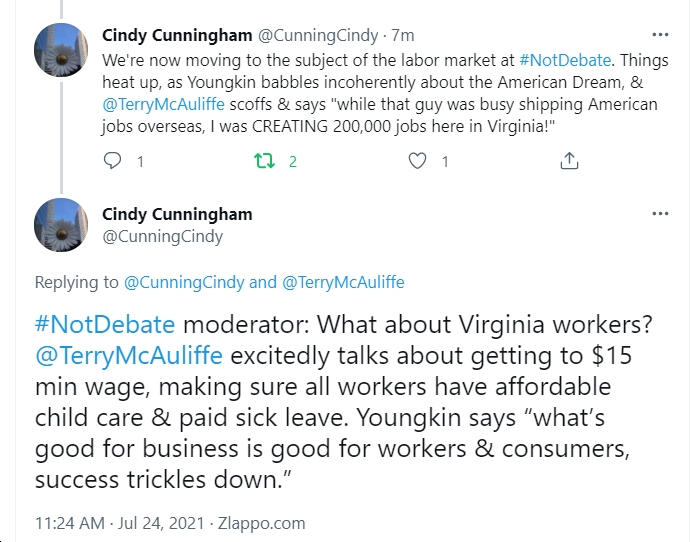 (Youngkin is nothing if not a “supply-side”/”trickle-down”-style, hard-right Republican. Again, his top economic advisor is Stephen Moore, coauthor of the book “Trumponomics,” who said “I’d get rid of a lot of these child labor laws. I want people starting to work at 11, 12.”) 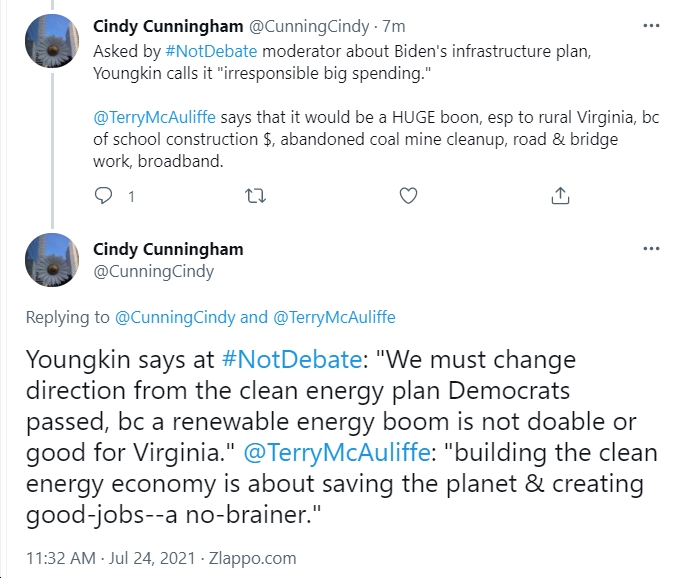 (Youngkin is, of course, not just wrong but WILDLY wrong on clean energy, both for environmental and purely economic reasons. In fact, as Terry McAuliffe has said, “building the clean energy economy is about saving the planet & creating good jobs – a no-brainer.” Then again, Youngkin’s top economic advisor is a guy who called climate scientists “Stalinistic” – completely unhinged – so what else would we expect from this guy?) 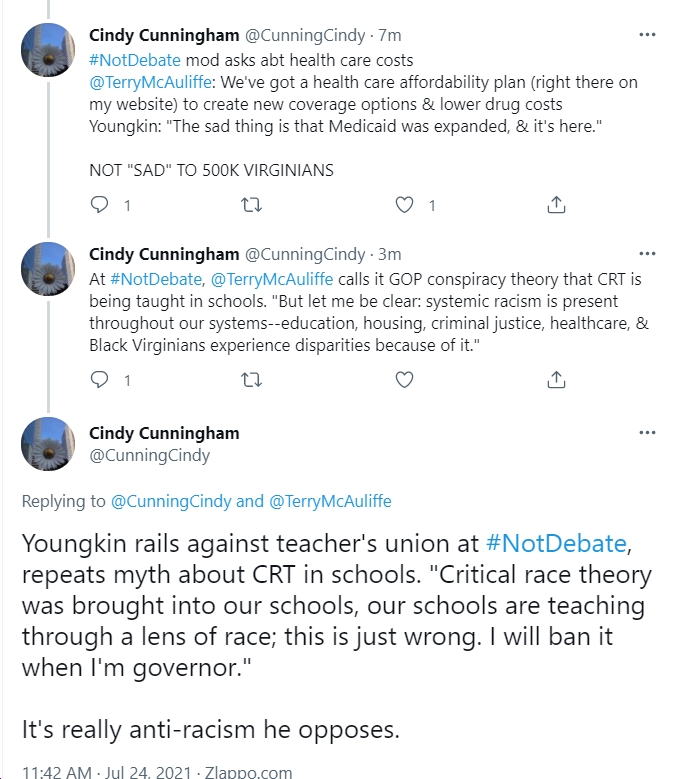 (Youngkin’s position on Medicaid expansion ALONE should be reason enough to disqualify him from consideration to be Virginia’s next governor. It combines heartlessness, cruelty and terrible policy in a way that you’d NEVER want in the person running your state… 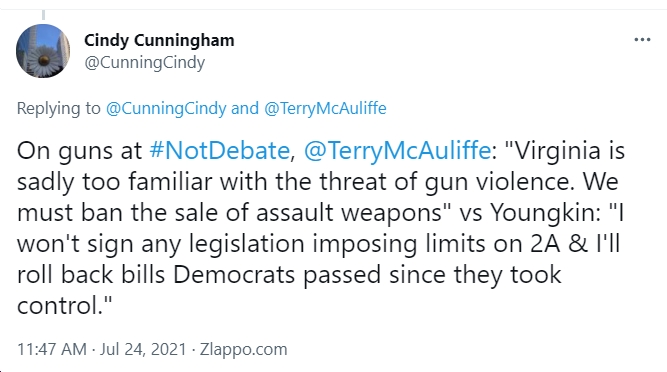 (Massive, glaring difference on this issue. Also note that McAuiffe is in the strong majority on this, based on many polls  that have been conducted – for instance, see this CNU poll, which found “overwhelming voter support for universal background checks and a red-flag law, with a slight majority in favor of a ban on assault-style weapons” –  while Youngkin absolutely is not.) 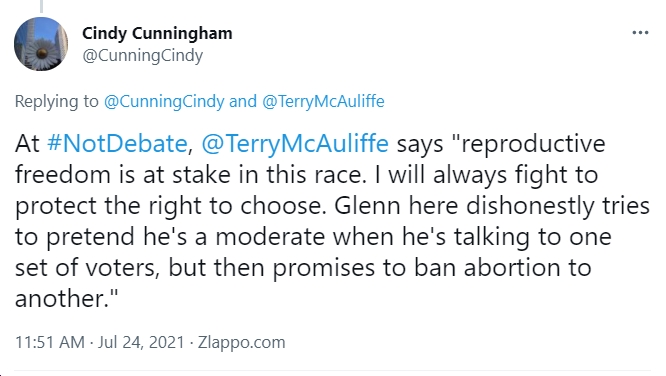 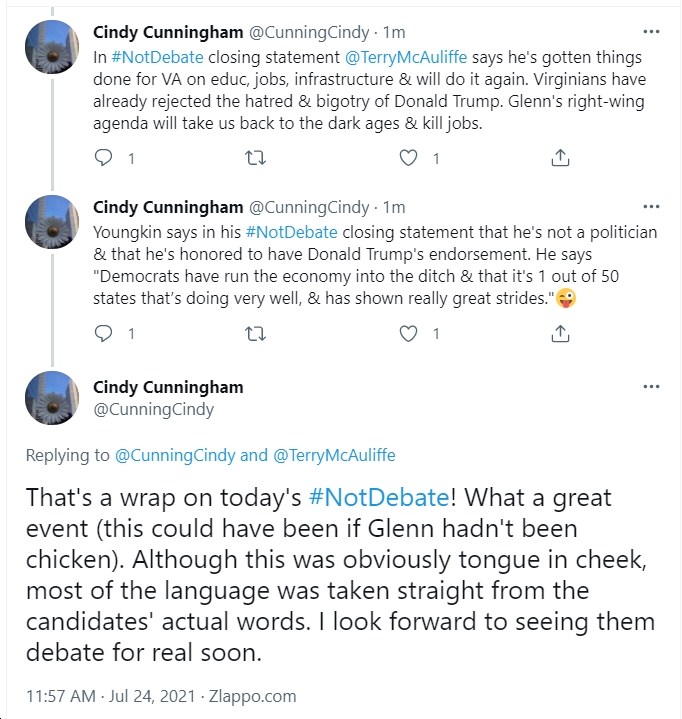 (Key point: “Glenn’s right-wing agenda will take us back to the dark ages & kill jobs.” Don’t let that happen!

Oh, and great job by Cindy in live tweeting this “not debate.” Thanks for doing it!)