The other day (on 9/18), as you might recall, a Republican candidate for Virginia House of Delegates (Hahns Copeland in HD89) tweeted out what the Virginia Democratic Party correctly called an “absolutely grotesque antisemitism on display from yet another @GlennYoungkin aligned Virginia Republican — just one day after Yom Kippur” against Speaker Eileen Filler-Corn, the first Jewish Speaker in Virginia history. And to date, there hasn’t been a peep from the VA GOP, Glenn Youngkin for governor campaign, etc.

Also note that back in July, another Republican candidate for Virginia House of Delegates – Julie Perry in HD86 – “compared the experience of being a conservative teacher in Virginia to the plight of European Jews under Nazi Germany during a recent ‘Educators For Youngkin’ event.” As a spokesperson from the Democratic Party of Virginia said at that time, “Minimizing the Holocaust is inexcusable, and Perry’s anti-Semitic comments have sadly become the norm for Virginia Republicans.”

With that in mind, see below for a mailer by another Republican House of Delegates candidate, using what certainly can be interpreted as anti-Semitic imagery, this time against Del. Dan Helmer (D-HD40) – who is Jewish and the grandson of Holocaust survivors – by his Republican opponent, Harold Pyon. 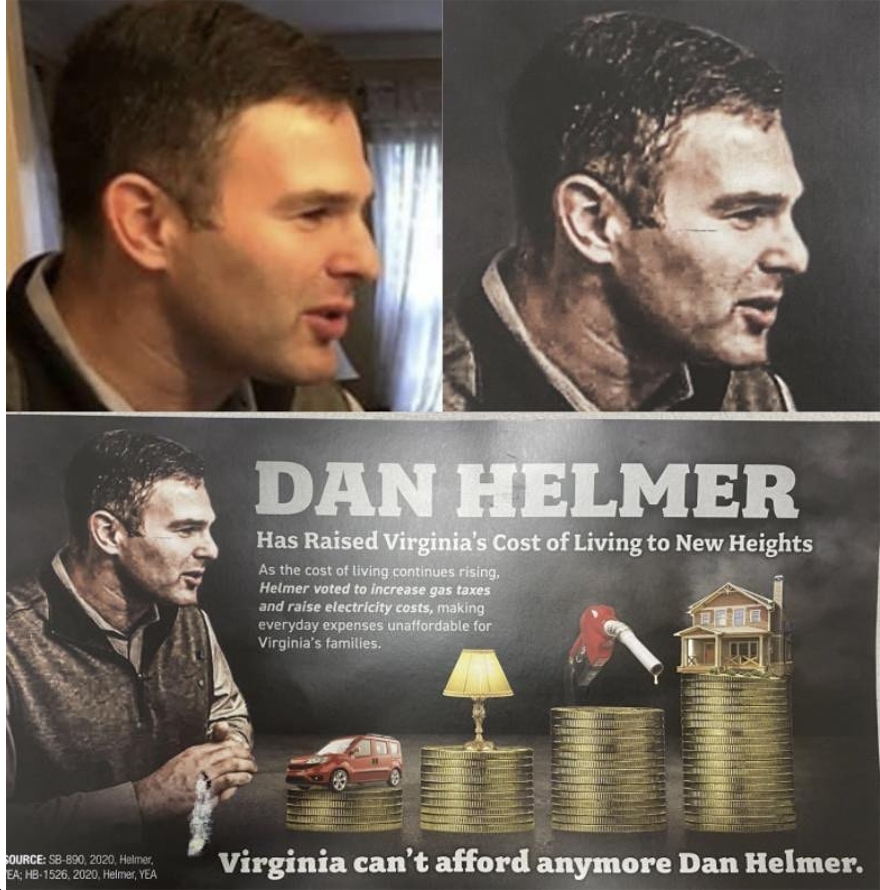 I ran this by several friends (Jewish and non-Jewish) to see how they reacted. Here are a few responses:

Changing/emphasizing the shape of his nose? Check. Images of stacks of gold coins? Check. Weird discoloration of the imagery to make Helmer look spectral, sickly or whatever? Check. And of course the focus on taking money away from “families.” Check.

Now, a few folks didn’t immediately see this (although several did, as soon as it was pointed out to them). So, is it possible that none of these things have any connection to Dan Helmer being Jewish, or to anti-Semitic imagery? Sure, but of course there’s always good ol’ Occam and his trusty razor (“the simplest explanation is usually the best one”). Or it could just be that the imagery was designed to be somewhat ambiguous, or to go right up to the edge, so that Pyon’s campaign could claim that this is all totally innocent, not at all anti-Semitic, just attacking a Democrat for supposedly “rais[ing] Virginia’s cost of living to new heights” (note: that’s false on all counts: a) Helmer hasn’t done anything to raise Virginia’s cost of living; b) Virginia’s cost of living isn’t at “new heights” in real/inflation-adjusted terms; c) Helmer didn’t vote to “raise electricity costs,” and the tax increase on gasoline is miniscule, certainly relative to people’s household income or even the cost of owning/operating a motor vehicle).

By the way, this isn’t the first time Republican have pulled this crap on Dan Helmer. Back in 2019, when Helmer first ran for House of Delegates against then-Delegate Tim Hugo (R), Hugo sent out a mailer that whitened Helmer’s features yet again and showed him holding a bunch of $100 bills. At the time, Del. Marcus Simon (D-HD53) – who is Jewish – responded:

Just substitute the name “Harold Pyon” for “Tim Hugo,” and that response seems to be highly appropriate for this latest mailer as well. Fortunately, Helmer defeated Hugo in 2019, so Hugo’s anti-Semitic mailer didn’t work for him then. Let’s all make sure that Pyon’s also-anti-Semitic mailer doesn’t work this election, either.

P.S. As for the tag line (“Virginia can’t afford anymore Dan Helmer”) in the mailer, that’s really weird too, as it should either read “any more Dan Helmer” or “Dan Helmer anymore” to be grammatically correct…but it still wouldn’t be factually correct in any way/shape/form. Just a bizarre mailer…any way you look at it.

P.P.S. It turns out that the same firm (Axiom Strategies – also ran Ted Cruz’s 2016 presidential campaign) which works for Glenn Youngkin’s is the main consultant for Harold Pyon as well. Innnnteresting.

In an Interview with the Christian Broadcasting Network, Youngkin Claimed God Told Him to Quit Carlyle and Run for Governor of VA; In Fact,...