For years, Virginia has been ranked towards the top (if not AT the top) of “best state to do business” rankings, at the same time that it’s been ranked towards the bottom (if not AT the bottom) for workers. Of course, during the vast majority of those years, Virginia was controlled – partly or in full – by Republicans, including in the House of Delegates, where they held a huge edge for years, and where they blocked basically any/all pro-worker legislation (and passed ANTI-worker legislation).  The result? Virginia was actually ranked #51 in the country for workers – behind Alabama and Mississippi – in 2019. Appalling – and again, the fault of Republicans’ assault on workers.

Fortunately, things began to change dramatically in January 2020, after Democrats took control of the Virginia State Senate and House of Delegates in November 2019, in addition to having a Democratic governor. The result? Check it out, per Oxfam’s newly released report, “Best and Worst States to Work in America 2021”!

Virginia, which was at the bottom of the index in 2018 and 2019, made a huge leap in 2021 to the top half of the index. This enormous improvement, from 52 in 2019 to 23 in 2021 is a direct result of communities and workers organizing for policy change, leading to important actions taken by the Virginia legislature and Governor Ralph Northam. Virginia became the 10th state to provide protections for domestic workers, and it expanded accommodations for pregnant workers, bolstered protections against sexual harassment, and raised its minimum wage, all policies that especially benefit working women. This previously lagging state has proactively demonstrated a new and serious investment in the well-being and dignity of all workers. Virginia also was the first state to pass an Emergency Temporary Standard (ETS) for workplace safety during COVID-19, a policy the state legislature passed in late July 2020.

Again, this is what happens when *Democrats are in charge*, and when *Republicans are NOT in charge*. Oh, and for those who falsely claim that we can’t be ranked highly BOTH as a place to do business AND for workers, recall that in June 2021, again under *Democratic* leadership, Virginia was named by CNBC as the Top State for Business in America – the “first ever back-to-back winner.” So at this point, Virginia is #1 in the country for business and in the top half for workers – all thanks to *Democrats*. Something to celebrate this Labor Day, and also something to keep in mind as you go vote this fall. 🙂

P.S. Also, the next time anyone idiotically claims that “elections don’t matter” or “the parties are the same,” you can show them this. 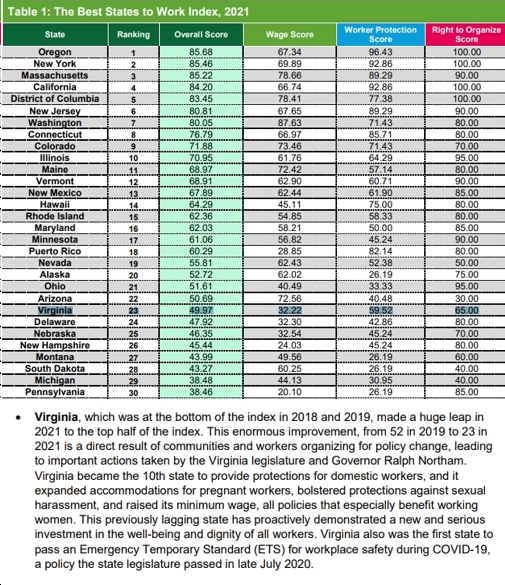