Another school board meeting in Virginia is in the news again. But this time, rather than unruly parents harassing and screaming obscenities at the teachers, security officers, and school board members, threatening other parents, and bullying school children. it was just one woman at the podium politely reading a prepared statement. It was one woman exercising her right to petition her government for redress of grievances, as is assured by the First Amendment of the US Constitution.

Her grievance? An elected member of the Board, Chairwoman Victoria Proffitt, collected unemployment benefits while simultaneously earning—without disclosing to the Virginia Employment Commission—her salary from the City of Chesapeake for her service on the School Board. For four consecutive weeks, Proffitt applied over and over for the benefit, stating affirmatively that she had no other wages. And here’s the best part—she’s not only the Chair of the School Board, she’s running for Chesapeake Commissioner of the Revenue. The Commonwealth’s Attorney that investigated called her “intentionally dishonest, or…just exceedingly careless,” and she wants to be responsible for millions of dollars of taxpayer money! 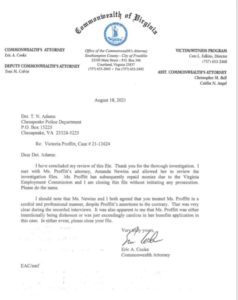 The woman speaking at the podium was Melanie Cornelisse, who is running for the House of Delegates in Chesapeake. She is a seamstress who led the local Moms Demand chapter there until she stepped up to challenge Delegate Jay Leftwich, who has run for that seat unopposed since 2013. She began her statement, saying “We expect our children to be honest and law-abiding, and if we maintain that truth and justice are vital in our government, we must hold our leaders to the same standards.” And then, just as she mentioned the Virginian Pilot article that originally reported the investigation, the Board silenced her, the Vice Chair banging the gavel and calling on the police to “get her out please!” She was handcuffed, taken into police custody, and charged with trespassing for exercising her First Amendment rights!

Cornelisse is no newcomer to speaking at school board meetings either. She has spoken numerous times in the past, often opposing proposed firearms policies that would make the schools less safe, such as arming teachers and placing armed guards at public school doors. And past Chesapeake School Board meetings have resulted in heated arguments over transgender student policy, and mask policy. In fact, everyone attending this month’s meeting had to pass through a metal detector because they have gotten so tense, and attendees have flashed weapons during past meetings.

But this was not a case of that. This was a non-threatening, calmly-spoken statement of fact about inappropriate conduct by the Chair. According to a 2001 case challenging the Virginia Beach School Board bylaws that limited public comment at their meetings, “it is a prized American privilege to speak one’s mind…this includes the ability to question the fitness of the community leaders, including the administrative leaders in a school system, especially in a forum created specifically to foster discussion about a community’s school system.” The only type of restrictions permitted are “content-neutral regulations” that “restrict the time, place, and manner of protected speech, as long as the regulation is narrowly tailored to serve a significant governmental interest.” (An example of such an interest might include keeping the members of the public in attendance safe, keeping the School Board members safe, etc.)

If, as Proffitt claims, the unemployment overpayments were just an “error,” she has the right to explain herself to her voters and constituents. But what she does not have, is the right to silence and arrest someone for criticizing her actions. Before conservatives scream about freedom and liberty and wave the flag around, perhaps they should remember that the First Amendment is first for a reason. It is imperative that citizens be able to criticize their government and speak their minds without fear of being censored or persecuted. Anything less leads to tyranny.

"They still have their reply to you up defending it while they are deleting the original" - @SenLouiseLucas https://bluevirginia.us/2022/12/delete-this-antisemitic-filth-va-dems-respond-to-va-gops-tweet-attacking-del-don-scott-for-receiving-donation-from-george-soros#comment-6055733285 cc: @DonScott757