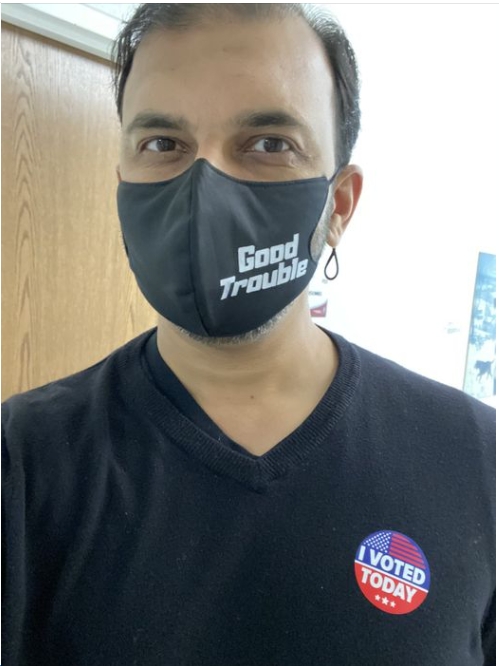 This story, by Qasim Rashid, is SO revealing about what the Republicans are up to regarding their fear mongering and demagoguery on “Critical Race Theory.” Check it out!

So I have to share this story of what happened when I went to vote today in Virginia’s elections.

I started the day by attending a rally to reelect Delegate Joshua Cole (more on that in another post).

As I’m walking into the courthouse to vote a friendly face greets me and hands me a sample Dem ballot. Of course I voted for Terry McAuliffe for Governor, Hala Ayala for Lt. Gov, and Mark Herring for AG. The friend then says to me, “Watch out as you pass the Republicans.”

Me: Why? What’s up?
Friend: They’re going to try to get you to sign a petition to ban Critical Race Theory in public schools.
Me: But…we don’t teach CRT in public schools. It’s a law school level course. I know this because I’m a lawyer & I read.
Friend: [chuckles] Well just warning you.
Me: Where are they?
Friend: That guy over there is getting signatures.
[He points to a young guy standing not far from me. I decided to approach him. Let’s call him GOP Guy].
Me: Hey are you taking signatures for a petition to ban CRT?
GOP Guy: Yeah. But I’m not here to debate with candidates.
Me: I’m not a candidate. I’m just a citizen trying to understand.
GOP Guy: Well okay. But, don’t I recognize you? You ran for Congress last year?
Me: I did. So what is this petition all about? What are you banning? Can I see the petition?
GOP Guy: I’m not here to debate anything with you sir.
Me: Me neither. This isn’t a gotcha. I’m here to understand from you, what you think CRT is and why you’re banning it?
GOP Guy: Well I believe education should be fair and impartial. And in my opinion CRT isn’t fair so it needs to be banned.
Me: Ok yes I agree education should be fair and impartial. But you didn’t define CRT. What is it defined as in your petition? Can I see the petition?
GOP Guy: No. But CRT is just unfair.
Me: Ok, but why? What is it about CRT you find unfair? Walk me through this.
GOP Guy: I’m not going to continue this discussion.
Me: So I can’t see the petition either?
GOP Guy: [shakes his head no]
Me: No problem. Look, I want to thank you. Before speaking with you, I felt pretty confident based on the public discourse that the GOP was fear mongering about CRT and had no idea what it actually is. This conversation with you has changed that confident assumption into a certain confirmation. You really have no idea what CRT is and you’re just using it to demonize Black and brown people.
GOP Guy: That’s what you got from our convo?
Me: That’s what you gave me. If you can’t define it, and can’t even show me the petition to let me see what you’d want me to sign, you’ve proven you have no idea what CRT is, and this is just another GOP scare attempt because you can’t run on actual ideas. That’s a shame. Good luck to you.

With that I turned around and went to vote. On my way out I met a few more people who recognized me from my run for US Congress. Most were very polite and embraced me.

And then I got to experience the result of GOP fear mongering. One unfortunate person wearing an American flag shirt screamed at me from across the parking lot, “HEY I KNOW YOU,” and he followed up with a racist slur that I won’t repeat here. This was in public, broad daylight. Sadly, this ignorance is what GOP leadership thrives on. I’ve long said I differentiate between Conservatives and GOP leadership. This is another example why. GOP leadership is flat out lying to their own base, because they know they can’t run on the ideas of compassion, justice, and fighting for working families.

As I left, another gentleman chased me down and said, “Thank you for continuing to be involved, even though you’re not running. I hope you run again. I’ll be there to give you my best effort.”

I smiled and truly appreciated the gesture. “Stay tuned. We’ve got big plans coming soon, and I can’t wait to share them with y’all.”

My friends, please go vote. Let’s win this election and continue to move Virginia forward with compassion and justice.