As you’re aware, Democrats currently control the Virginia State Senate by a slim, 21-19 margin, leaving no margin for error to stop the Trump-style agenda of Glenn “Trumpkin” Youngkin and his fellow right-wing ideologues. So far, fortunately, Senate  Democrats have been holding the line and stopping a rollback of progress from the past four years, but on the issue of abortion, there’s some question whether they’ll be able to do that, given that there’s at least one member of their caucus (Sen. Joe Morrissey) who says he’s “pro-life” (aka, anti-reproductive-freedom) and has even stated his possible support for a bill that “prohibits an abortion after 20 weeks.”

Which makes the fact that Democrats don’t have more than 21 seats even more frustrating, given that there were expectations leading up to the November 2019 General Assembly elections that Democrats could end up with 23 seats (or even more, with some optimistic Democratic insiders hoping for 24 or 25). One of the seats that Democrats were hoping – or even expecting – to pick up in November 2019 was the 12th district, a “purple” district located mostly in increasingly “blue” Henrico County, and which Ralph Northam won by 5 points in 2017. Unfortunately, in the end Democrat Debra Rodman lost that race narrowly (50.76%-49.06%) to incumbent Sen. Siobhan Dunnavant (R), an OB-GYN physician who is the sister of former Delegate Chris Stolle (R), former State Senator and current Virginia Beach Sheriff Ken Stolle (R), Virginia Beach Commonwealth’s Attorney Colin Stolle (R), and Virginia Beach Commissioner of Accounts Edward Stolle.

With new district lines having been approved, following the 2020 Census, Dunnavant will be running for reelection next year in the new 16th State Senate district, located 100% in Henrico County, and which went narrowly (52.3%-47.6%) for Democrat Mark Herring in the 2017 Virginia Attorney General’s race. Bottom line – this is going to be a tough-but-competitive seat next year, one which Democrats definitely need to win if they want to hold – or have any hope of increasing – their State Senate majority.

All of this brings us to Dunnavant’s record, which increasingly has been hewing to the hard right. Recently, for instance, Dunnavant voted *against* killing legislation by far-right Sen. Amanda Chase that would have allowed licensed healthcare providers to “prescribe, administer, or dispense hydroxychloroquine and ivermectin to a patient with a clinical diagnosis of COVID-19.” Yikes. And then there was this, as reported yesterday by VAPLAN (the Virginia Progressive Legislative Alert Network) 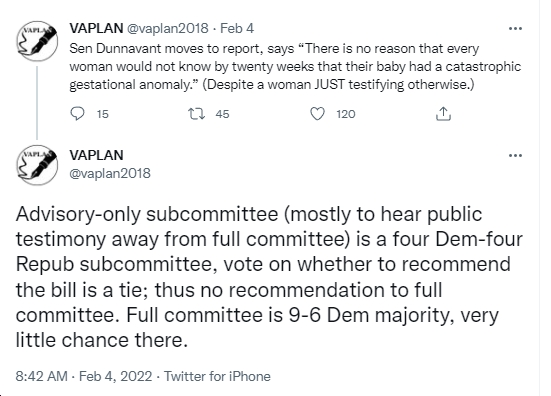 The bill in question was SB710 (“Pain-Capable Unborn Child Protection Act”), by Sen. Chase, which “prohibits an abortion after 20 weeks gestation unless, in reasonable medical judgment, the mother has a condition that so complicates her medical condition as to necessitate the abortion to avert her death or to avert serious risk of substantial and irreversible physical impairment of a major bodily function.” In the end, as VAPLAN reported, the subcommittee made no recommendation to the full committee on this bill, as the vote was a tie, along party lines  (Democrats voting not to report; Republicans, including Dunnavant, voting to report). Also note VAPLAN’s tweet:

“Sen Dunnavant moves to report, says ‘There is no reason that every woman would not know by twenty weeks that their baby had a catastrophic gestational anomaly.’ (Despite a woman JUST testifying otherwise.)”

Oh, really? What about if she had not had access to the expensive screening and invasive testing that permit early detection of most (but not all) anomalies?  While very few seek abortions after the first trimester, those who do are among the most vulnerable in our society, with the least access to healthcare – a fact still true today despite improvements to healthcare access (improvements that Dunnavant opposed).  Dunnavant, in fact, was an ardent opponent of the Affordable Care Act and Medicaid Expansion, even putting out an ad that called their advocates “crybaby politicians.”

So what has Dunnavant’s record on abortion been? Dunnavant raised eyebrows when (as reported in Greg Schneider’s Washington Post article) she opposed allocating federal dollars to make IUDs accessible to lower-income women because “There are constituents who strongly believe these are abortifacients.  I believe that we don’t have any definitive data that says they’re not.”  She took this position even though she acknowledged that access to IUDs can help to reduce unwanted pregnancies and abortions.

Dunnavant was a signatory (along with Sen. Bryce Reeves, Del. Nick Freitas, Sen. Amanda Chase and other right-wing Virginia Republicans) to this 2016 amicus brief to the US Supreme Court in support of a Texas law that required abortion clinics to meet the criteria of ambulatory surgical care units; required that physicians have privileges at a hospital within 30 miles; banned abortions at 20 weeks or later, with exceptions only for life of the patient or severe fetal anomalies – but not for rape or incest; and added restrictions to medical abortions.  Despite the best efforts of conservatives, SCOTUS struck down the Texas law in a 5-3 vote on the grounds that it placed undue burdens on women’s constitutional right to an abortion.

Which brings us to this audio, from a house party fundraiser for Siobhan Dunnavant back in May 2019. The conversation portion of the audio’s a bit hard to listen to, because of all the background noise, but fortunately, Dunnavant’s stump speech is very clear, and the person who took the audio also provided notes about what Dunnavant had to say, such as:

Got all that? Yeah…no. Anyway, just keep all this in mind as we watch Sen. Dunnavant’s votes in the 2022 and 2023 Virginia General Assembly sessions, and as we work to defeat her in November 2023!

Thursday News: “The Green Transition Is Happening Fast. The Climate Bill Will Only Speed It Up.”; “Trump’s CFO Allen Weisselberg Will Implicate Trump Companies...