Gotta love this: two extremist, insurrectionist, right-wing delegates – Marie March (see here for more on her, including that she was at the 1/6/21 pro-Trump rally on the National Mall) and Wren Williams (a “Big Lie conspiracy theorist who led Donald Trump’s efforts to overturn Wisconsin“) – were drawn into the same district (HD44, a deep-red, 79% Youngkin district in SW Virginia), and now are going after each other, specifically when it comes to abortion, as they gear up for their primary, which presumably will take place in June 2023. Check out their fiery exchange, below, as Williams rips March for supposedly writing, back in February 2019, about the “ethics around…’deciding to terminate a pregnancy’.” According to Williams, March wrote:

“Our choices are personal and unique. So WHY is Government even involved????? How bout let’s get Big Government out of our lives – they neither financially support nor make it illegal.”

In response, Williams said he’s “shocked and horrified that my opponent, Delegate Marie March, would respond to Northam and his Pro-Life critics by defending abortion and saying that the government should not make it illegal.” Williams added that “Marie March is Pro-Choice. There is no other way to interpret her comments.” And he called for her to drop out of the race, saying she is “unfit to represent us” and calling himself the only Pro-Life Republican in this race.”

For her part, March responded to Williams this morning, calling it “my opponent’s attempted smear campaign, and adding:

His post is merely a career lawyer’s attempt to derail a pro-life bill I just announced yesterday that will protect life at conception. Wren Williams has not had the courage to lead with such a bill and just like liberals in DC, who likely leaked the draft language of the verdict repealing Roe vs Wade to harm it’s repeal. Mr. Williams is using the lives of unborn babies as political fodder to derail my attempts to lead pro-life legislation. He has proven to be the deceitful politician many have already feared he was and he should drop out of the race immediately for this political stunt and his lies.

I will continue to lead the efforts to push forward and pass my legislation to protect life at conception across Virginia – with or without the support of RINO’s like Wren Williams. His negative smear attempt is to try and drag me down with him into the Swamp where he is comfortable residing. I will continue to spend my efforts working for positive, meaningful accomplishments for our district and for all Virginians.

I’m a mom that loves her children and believe that all souls deserve a chance at life.

Interestingly, March didn’t deny writing what Williams accuses her of writing. Anyway, this is the crazy world we live in, when two far-right, extremist, insurrectionist Republicans viciously attack each other for not being sufficiently AGAINST women’s rights to reproductive health/freedom and bodily autonomy. Ugh…

P.S. H/t to reporter Brandon Jarvis for tweeting about this. 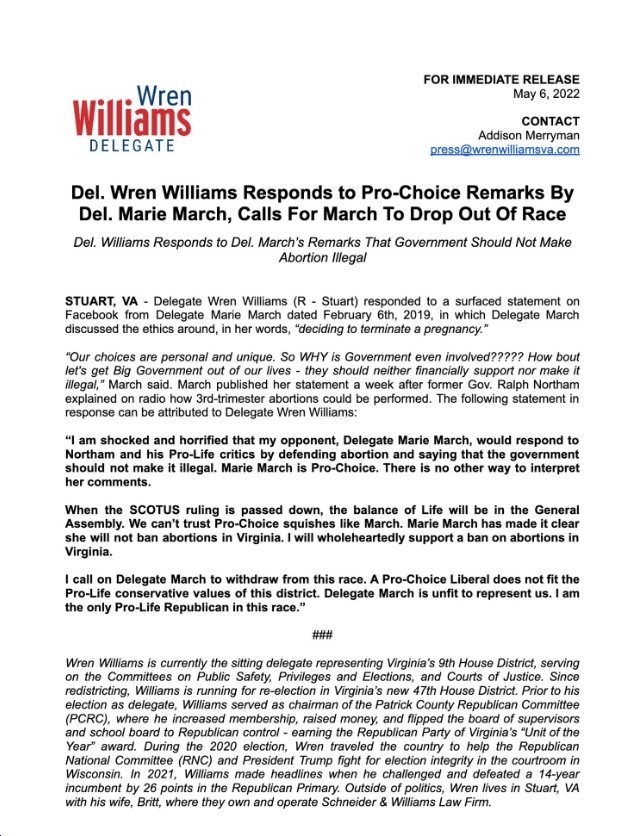 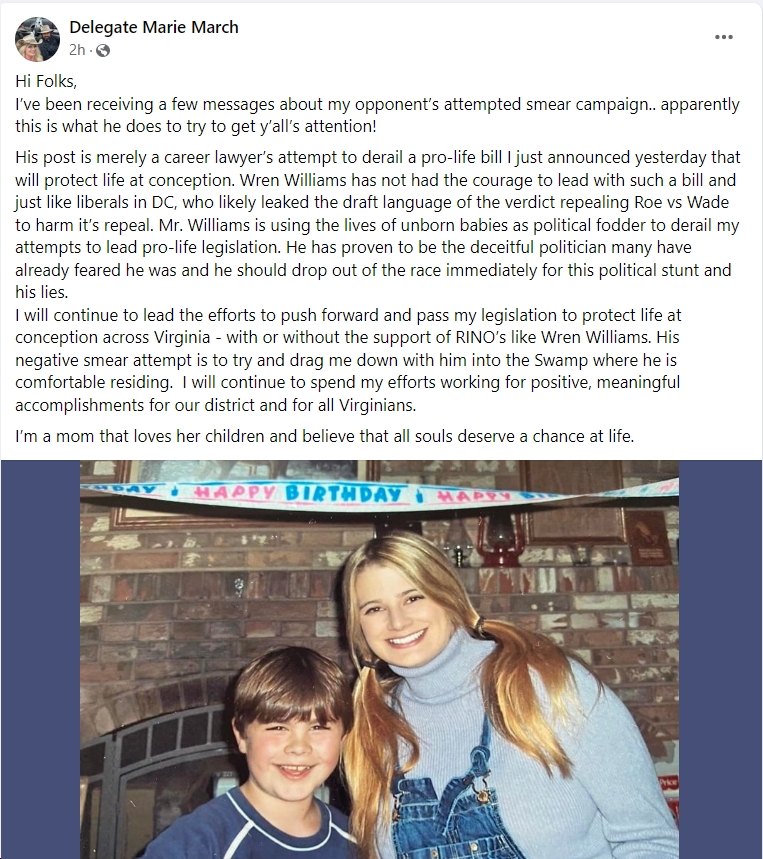