As we know, two of Glenn Youngkin’s favorite things in life are: a) ranting about how crime is supposedly OUT OF CONTROL and WE NEED TO LOCK EVERYONE UP AND THROW AWAY THE KEY!!!; b) going on his “safe space” of right-wing (or far-right-wing). So, this morning, Youngkin was busy doing both of those things on right-wing radio (WRVA’s “Richmond’s Morning News with John Reid). See below for a quick summary by VAPLAN/Cindy, who says:

“As if on cue, Youngkin appeared on WRVA this morning to say “we’ve got to arrest people, we’ve got to prosecute people, put ‘em in jail, keep ‘em in jail. Youngkin said his task force meeting in Petersburg is a “case study. Senator Chap Petersen was there, along with Republicans…This is the kind of collaboration and cooperation we have to have in order to press forward and put an end to this [imaginary] violent crime increase.”

The intro from the (very) right-wing host was that “murders and violence across the state” is “becoming a huge problem.” For the record, in fact the VA State Police’s own stats show that “Virginia experienced a 1.9% decrease in violent crime offenses [in 2020] compared to 2019.” So what’s Youngkin basing this supposed “rise in violent crime” on exactly? Does he know something the Virginia police don’t?  To quote Youngkin from the show this morning:

“We are seeing across the Commonwealth a tremendous increase in violent crime and the murder rate. We’re at a 20-year high, and we’ve gone to work over the last month bringing together federal, local and state assets…what we can do about it real time…The Democrats in our House and our Senate see what’s going on in crime as well, and we’ve had great participation from both sides of the aisle in our taskforce meetings and I’m encouraged, because at the end of the day, there’s a clear recognition that we have got an absolute crime crisis. We have got to arrest people…prosecute people…put them in jail…keep them there. The violent crime trend in Virginia has been escalating over the last two years, we’ve seen it in real time and we’ve got to get to work together. This is not a moment for partisan politics…I’m encouraged…Taking our meeting in Petersburg as a case study, Sen. Chap Petersen was there along with Republicans…”

First of all, Sen. Chap Petersen doesn’t appear to have been at that Petersburg summit, as he was out of town (in Idaho). Also, as Glenn Youngkin’s photos of the event clearly show, it’s Sen. Joe Morrissey – who, last I checked, is NOT Chap Petersen, lol – who is sitting a few feet away from Youngkin.

As for Virginia, the latest statistics are for 2020, and they show – as noted above – that “Virginia experienced a 1.9 percent decrease in violent crime offenses compared to 2019. There were 15,713 violent crime offenses reported in 2020 compared to 16,018 violent crime offenses in 2019.”  So…again, where is Youngkin getting his crime statistics to support his claim that that “murders and violence across the state” is “becoming a huge problem?” Does anyone know? For instance, he claims that Virginia’s violent crime rate is at a “20-year high,” but according to this graph (see below), it’s not even CLOSE to a “20-hear high” (it’s actually 26% lower than in 2000!). Also note that Virginia’s violent crime rate is FAR lower than the national rate. So yes, every incidence of murder or other violent crime is horrible, and should be prosecuted to the full extent of the law, but in talking about this problem, we really do need to get our facts straight. So again, what exactly is Glenn Youngkin basing his scary narrative on? Because the official statistics, whether from the FBI or Virginia State Police, definitely don’t appear to support it. 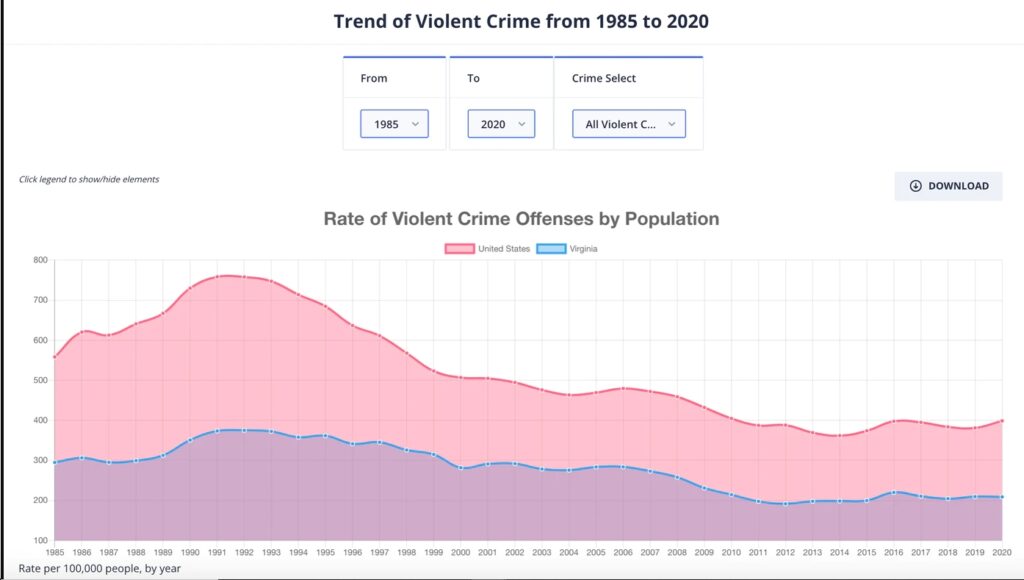 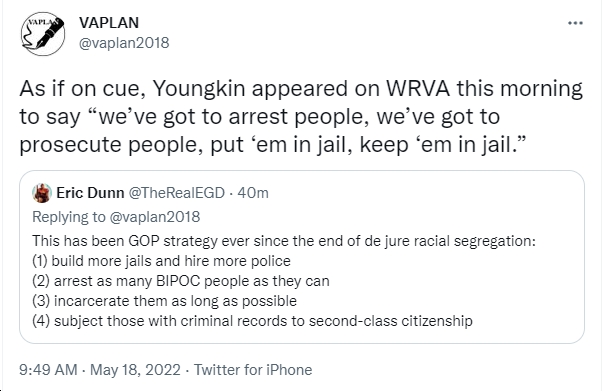 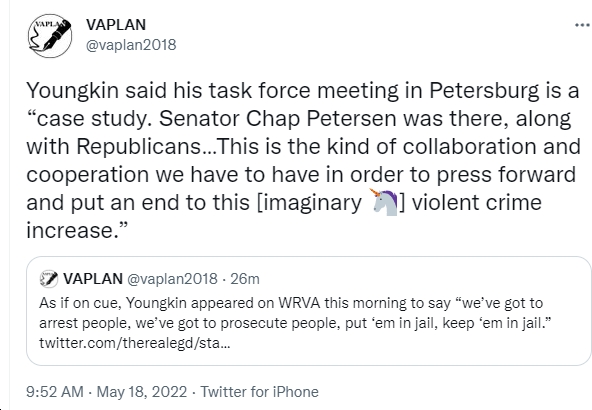 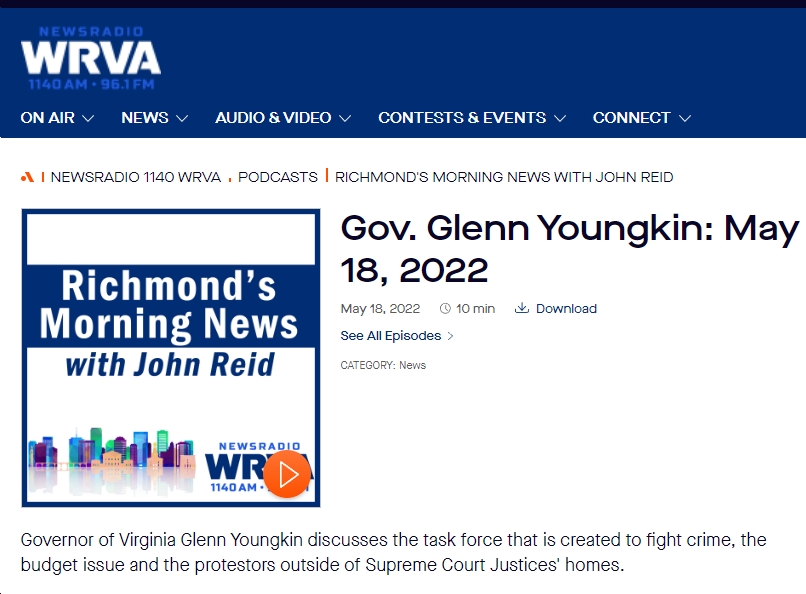