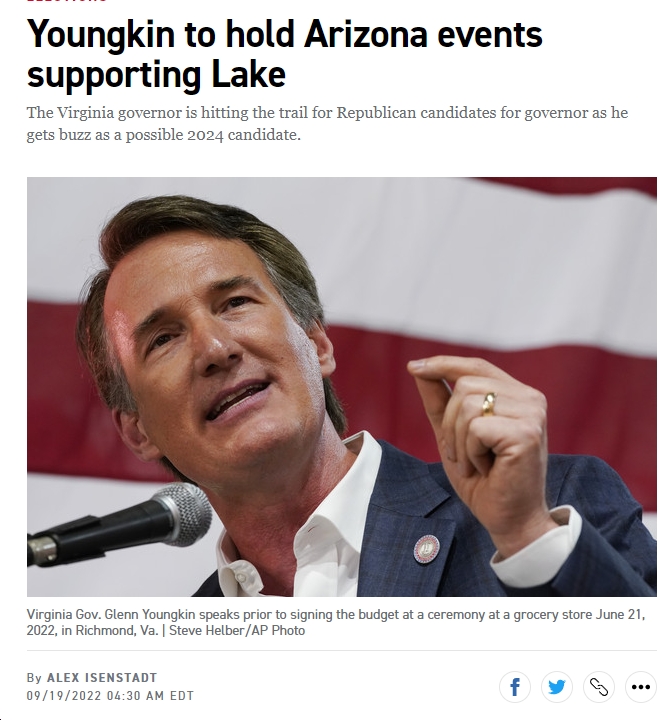 Remember how Axios flat-out lied, claiming (falsely) that Youngkin “is bypassing MAGA-oriented gubernatorial  gubernatorial candidates in favor of pragmatists running tough races in blue states?” Except that, of course, Youngkin has absolutely NOT been campaigning for “pragmatists,” but instead for far-right extremists like Tudor Dixon in Michigan, Paul LePage in Maine, Heidi Ganahl in Colorado, Joe Lombardo in Nevada, etc, etc.

And now, according to this morning’s Politico, Youngkin will be campaigning for one of the most extreme, batshit-crazy candidates in America:

… Lake will be the highest-profile, most MAGA-aligned candidate Youngkin has campaigned for to date. She has embraced Trump’s false claim the 2020 election was stolen, railed against Covid vaccine mandates and turned the media into a punching bag. Polls have shown her in a tight race with Democratic Secretary of State Katie Hobbs, in a state that was narrowly won by President Joe Biden.”

As Politico notes, Lake is a “MAGA-aligned candidate” who “has embraced Trump’s false claim the 2020 election was stolen, railed against Covid vaccine mandates,” etc. Horrendous, but believe it or not, it gets worse! Check it out.

On and on it goes (for instance, on her website, she falsely – and dangerously – claims that “vaccines have now been shown to have significant, deadly side effects while providing little or no protection against contracting Covid-19”).  Completely bonkers. Yet, apparently, Youngkin is perfectly ok with this insanity, as he’s “expected to hold political and fundraising events for Lake.” Any further questions as to whether Youngkin’s a “moderate?” LOL