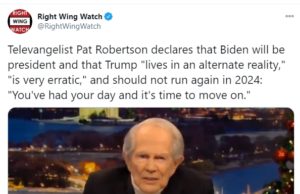 Video: Pat Robertson of All People Declares Biden Will Be President,...

lowkell - December 21, 2020 0
Wait, what? Virginia's own Pat Robertson - chancellor and CEO of Regent University in Virginia Beach; huge Virginia GOP donor, including over $100,000 to...

lowkell - April 29, 2019 0
Who's funding the Virginia House Republican caucus? How about $50k from our old pal Pat Robertson, who of course is an unhinged religious fanatic...

I Never Would Have Thought It Possible (What the Propagandists of...

Andy Schmookler - August 12, 2017 1
This piece has appeared in newspapers in my very conservative congressional District (VA-06). ************ Over the past generation, the political right in America has accomplished something...

Eventually there'll be a lesson from the McDonnell trial. For now, though, the revelation is how easily polished politicians can embrace and superimpose parallax and conflicting images without challenge. What we see depends upon where we stand. We too often choose the view that eliminates the discomfort of cognitive dissonance.

You might recall that Bob fashioned himself as a friend of business; the "Jobs Governor." Now that it is convenient, he feigns disinterest in the details of business and investment. Even Jonnie Williams recalls an investment proposal putting the Governor to sleep during a plane ride. Many remark that it is a shame that such a fine man finds himself in this situation and look for someone to blame. Maureen is a convenient straw-woman; for them and for Bob's attorneys. Some say that he is so bright that it is surprising that he was taken in by a snake oil salesman. Others believe that he was simply too trusting. This reflects a public persona that he cultivated along a path of retrofitted accomplishments and, as it turns out, malleable, maybe even bankrupt, fundamental values.

Bob was born with the gift of physical charisma; aka good looks. Many people rely on that gift to advance themselves. If you've got it, flaunt it, so they say. But when there is not sufficient desire to develop internally yet personally ambitious, the alternative to interpersonal and intellectual development is building socio-pathological, manipulative skills. Bob McDonnell's accomplishments were singularly adequate and hardly distinguished but sufficient to pass as achievement among a close knit group of Virginia Beach, then statewide sycophants.

While it is patently obvious that both Bob McDonnell and Ken Cuccinelli can be had rather cheaply, there are other matters that concern your family more than the people of the Commonwealth. Ken is a horrible judge of character. He's an even worse investor. We're talking your children's futures here.

I am afraid you may not comprehend that for a time Ken's entire investment portfolio consisted of a single position in a rather murky business venture that was certainly high risk. That's not the kind of investment philosophy a more business savvy person with seven children would employ. It is certainly not the kind of philosophy a Governor should operationalize, say with investments made by the Virginia Retirement System (VRS). It's probably not a coincidence that at almost the same time Bob's pals were risking the future of the VRS investing in high risk derivatives (we should demand a report on specific outcomes from those investments. It is quite possible they did very well; but we usually hear about such things). Ken may just have wanted to have some of that action too. But you really want someone in charge of the family treasure who knows something about business and investments.

You see, with Star Scientific, Ken was disqualified on two fronts when he let emotion rule his decision to invest. First, Ken has a history of misjudging people. Maybe you remember Bobby Thompson who gave your husband a lot of money stolen from veterans. Ken bought the whole scheme, hook, line, and sinker. This also speaks to his ability to critically think, something a lawyer should be able to demonstrate; worrisome. But that's not the second issue. No, the second is Ken's casual approach to science. When investing in a company with the word "scientific" in its name, it might pay to actually be able to discern how science works. We already know that Ken would rather deny something he does not want to believe rather than analyze the evidence. Of course, he's burned his bridges with a significant portion of the scientific community, so the people from whom he is likely get advice are probably only those who are "like-minded." Not being a good judge of character, maybe he shouldn't be allowed to choose an investment advisor either. He might reach out to his pal Bob Purkey, who, self-proclaimed investment genius that he is, let that whole VRS derivatives position blow right by him.

Pat Robertson: Republicans Have Moved Too Far Right To Be Electable

Wow, Pat Robertson of all people nails it -- today's Republican Party has moved so far to the right that it's becoming unelectable nationally (at least we'd all better hope so, or we are TOTALLY screwed). I mean, seriously, when even a total right wingnut like﻿ Pat Robertson (of all people) says the Republicans have gotten too crazy, it's pretty much indisputable by anyone that the GOP has gone completely off the deep end, off the cliff, etc.

Here is a patently grievous lie right from Robertson's organ:

"We said 'Look, you save money, you'll have a 3 percent bonus.' So they saved about $175 million and we spent about $80 million on bonuses. I mean, it really worked well - private sector incentives to get people to conserve and save and be more efficient." - Bob McDonnell

McDonnell claims that bringing in private sector incentives carried the day. He must be talking about the kind of Wall Street incentives that led to the collapse of the financial sector under a Republican watch. Bob McDonnell's lackeys robbed the state employee retirement system to balance the budget. It wasn't some incentive at the end of the fiscal year. That defies credulity. Stealing: there's some mention of that in those commandments so many Robertson followers want to display prominently everywhere. But in their minds it isn't stealing. It is a contribution by state employees; passing the plate, so to speak. You know, the way those banks voluntarily contributed to the James brothers.

Scott Rigell, Bob McDonnell, and Michelle Bachman - these are the people cited by Ralph Reed and Pat Robertson as great examples of Regent University grads. No further comment necessary, this says it all.

Does Pat Robertson's Manchurian candidate governor (aka, "Bob McDonnell") agree or disagree with his mentor (aka, "Pat Robertson") on this? Maybe NLS can ask him while he's surveying the General Assembly on whether or not they support gay marriage. Heh.